Nov. 28, 2016, © Leeham Co.: Airbus claims that in a huge blow to Boeing and Washington State, the World Trade Organization (WTO) ruled today that the $8.7bn tax subsidy package Gov. Jay Inslee and the state Legislature approved for the 777X program is a “prohibited subsidy.”

This is the most onerous finding of illegal subsidies under WTO rules, and one that is rarely determined.

Boeing said the WTO “today rejected virtually all of the European Union’s challenges to the Washington state tax incentives” and declared a “complete victory.” 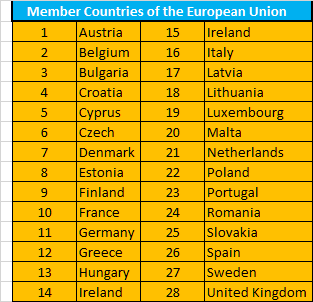 If the European Union placed sanctions on Boeing, all these countries would be involved in penalizing Boeing. Click on image to enlarge

The statements from Airbus and Boeing are so at odds that they don’t appear to be reacting to the same WTO decision.

“Today’s report from the World Trade Organization (WTO) Panel (DS487) confirms that the United States has ignored international trade rules by permitting illegal subsidies to Boeing, this time targeted at the 777X aircraft,” Airbus said in a press release touting the “knockout blow” to Boeing. “The [WTO] Panel found Washington State’s multi-billion dollar subsidy regime for Boeing to include “prohibited” subsidies, which in the Panel’s words belong to “a special category… which Members have deemed to create such trade distortions that they are proscribed,” because they are “specifically designed to affect trade.”

Washington’s $8.7bn in tax breaks were specifically tied to the 777X, the WTO found, in violation of its rules, according to Airbus.

Airbus, on the defensive for 12 years in the original WTO cases, went into full-court press to declare this a clear win.

“Now it becomes clear why Boeing made such a noisy PR stunt on the occasion of the recent WTO ruling requiring some limited adaptations to the European funding schemes. It was all smoke and thunder to cover up for today’s ruling on prohibited US subsidies,” said Tom Enders, CEO of Airbus Group. 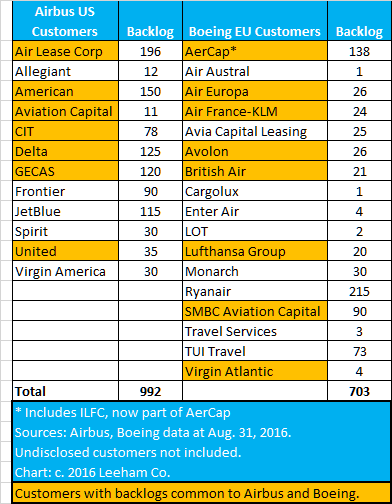 Customers ordering both Airbus and Boeing airplanes make it less likely any sanctions will be placed on either company for fear of pissing off customers. Click on image to enlarge.

“Another in a long series of WTO defeats for Boeing: the WTO confirms funding illegality and market distortion by the 777X subsidies,” said Fabrice Bregier, CEO of Airbus Commercial.   “Congratulations, Boeing, you managed to get another free ride to develop your newest aircraft, the 777X. With the past illegal subsidies for the 787, and now the 777X prohibited subsidies, we estimate a loss in Airbus sales of at least $95 billion.  How cynical for you to talk about ‘fair’ trade!”

“Today’s WTO ruling is an important victory for the EU and its aircraft industry,” EU Trade Commissioner Cecilia Malmström said via Airbus. “The panel has found that the additional massive subsidies of USD 5.7 billion provided by Washington State to Boeing are strictly illegal. We expect the US to respect the rules, uphold fair competition, and withdraw these subsidies without any delay.”

“In today’s case, the EU challenged seven different state tax incentives,” Boeing said in a statement. “The WTO rejected entirely the EU’s challenge to six of the seven incentives and rejected most of the challenge to the seventh.  The WTO held only and narrowly that a reduction in Washington state’s Business and Occupancy (B&O) tax rate for future 777X revenues is inconsistent with the WTO agreements.  The WTO threw out all of the EU’s other challenges to various incentive programs and left untouched even the B&O tax rate as it applies to revenue from the other Boeing models produced in Washington state–the 737, 747, 767, 777 (current model) and 787.

“[Airbus is] facing sanctions next year and therefore trying to make everyone believe they’ve won a big case against Boeing,” Tim Neale, a Boeing spokesman, wrote LNC in an email. “[T]hey lost on most points, and the value of the 777X B&O tax incentive ruled a prohibited subsidy amounts to $50 million a year. They went for a prohibited ruling because the amount of money is not enough to distort the aerospace market and thus cause harm, which otherwise must be proven before sanctions can be imposed. This latest WTO ruling is in its first round. It can and likely will be appealed, and that process will run another year.”

The Boeing statement didn’t indicate if it will appeal the WTO finding. But Luttig’s statement above certainly hints that Boeing will do so to preserve “every aspect of Washington State incentives, including the 777X….”

Boeing agreed to build a wing production plant in Everett (WA), behind its giant building where all its wide-bodies are assembled (save those 787s in Charleston). Boeing also agreed to assemble the 777X here.

One condition in the agreement was that Boeing could not assemble the 777X elsewhere, unlike this omission in the 787 tax breaks of 2003. Boeing later selected Charleston as the site of a second assembly line. It was this, and several Boeing actions to move jobs out of Washington, that prompted officials to create a close nexus between the 777X and the tax breaks.

Although officials said when they granted the 777X tax breaks that these were merely an extension of the 2003 787 breaks, the 777X breaks are in fact specific to the 777X, the WTO found. Specifically tying them to the 777X proved fatal under the new WTO ruling.

The tax breaks were judged by WTO to be so closely tied to the 777X that only local content can be used, said a person familiar with the decision who declined to be identified because he is not authorized to speak for the WTO. “That’s what makes it prohibited. They’ve been given money that’s not available to anyone else.”

The 787 tax breaks were found by the WTO to be illegal under a separate case that involved a wide variety of issues. The WTO determined that Boeing received illegal subsidies from NASA, the US Department of Defense and Washington and Kansas.

The 777X tax breaks granted in November 2013 drew immediate attention from Airbus officials. The EU filed a formal complaint with the WTO, focusing on the prohibited subsidies rules. The narrow scope allowed the case to move ahead quickly, at least by WTO standards. (The broader cases against the US and EU are already 12 years old and still counting.)

Suppliers get tax breaks, but unaffected by ruling

State officials claimed when issuing the tax breaks were available to the broader Washington aerospace industry, not just to Boeing, thus making them legal. The WTO disagreed.

But suppliers who benefited so far don’t have anything to worry about in this ruling. Since only Boeing was named in the complaint and none of the suppliers, the ruling only affects Boeing and not them—unless a separate case were launched naming specific suppliers, an unlikely event.

Boeing reported that it benefitted in 2014-2015 by about $521m  from the tax breaks, which are claimed from the state on an annual basis as work is done, not up front. It’s not clear how much of this is specific to the 777X, though in today’s statements, Boeing says it’s only $50m a year and not until the first 777X is delivered in 2020.

“In 2015, Boeing got tax breaks and credits totaling $305 million — which is 55 percent more than the state estimated the entire aerospace industry would cash in for that year,” The Seattle Times wrote. “In 2014, Boeing alone exceeded the tax-break estimates by 19 percent.”

What happens now that the WTO ruled?

Airbus expects an appeal by the USTR. WTO rules call for a decision on the appeal within 90 days, but it’s common to take longer. Boeing thinks Airbus will also appeal on the points the WTO denied.

What’s also a certainty is that Boeing isn’t going to step up and write a check to repay the $521m received in 2014-2015, plus whatever the benefit has been received this year.

Indeed, when the EU filed its complaint against the US/Boeing, following the US complaint against the EU/Airbus, Jim McNerney, then CEO of The Boeing Co., and Jim Albaugh, then-CEO of Boeing Commercial Airplanes, said that if the WTO found Boeing had received illegal subsidies from federal and state governments, they’d step right up and repay the amounts.

The WTO did and Boeing hasn’t.

Appeals by the US of the original complaint continue to grind their way through the WTO process.

“I continue to think that the only way out of the ridiculous series of disputes initiated by the US is to agree on a set of globally applicable rules for the support of the civil aircraft industry, which would benefit both sides of the Atlantic,” he said. “The duopoly is no longer the framework of reference in the future. Look at the huge subsidies the Canadian government has granted to Bombardier just recently, look at the upcoming competition from Russia and Asia. Hence we need a global framework, like the one ICAO recently elaborated for aviation CO2 emissions. This WTO battle is a battle of the past which benefits only the armies of lawyers both sides employ for more than a decade.”

Boeing’s agreement with Washington provides that if the WTO finds tax breaks illegal, the State must come up with an alternative to replace these tax breaks. The form is not specified.

The Nov. 8 election in Washington included an initiative, I-732, that would impose a carbon tax to reduce pollution. There was an offset in the State’s Business and Occupation (B&O) tax (a tax on gross receipts) in an attempt to make the carbon tax revenue neutral.

Boeing would have major beneficiary of the elimination of the B&O tax.

“[I]f I-732 were to pass, Boeing could no longer be accused of taking special tax breaks. That tax would simply be gone for all manufacturers. Boeing’s B&O bills would be cut to zero,” The Seattle Times wrote.

That would have solved the WTO issue.

Whether this was an attempt to create something to benefit Boeing in lieu of the tax breaks is a matter of speculation. But it’s a moot point. The initiative lost.

Boeing previously outlined the amounts of harm it believes it suffered from $22bn in subsidies it calculates Airbus received.

As with the allegations of harm to Boeing from illegal subsidies by the EU to Airbus in the previous action, the EU claimed harm to Airbus from the 777X tax breaks.

At the time Boeing began offering the aircraft, there wasn’t a 777X or an Airbus equivalent, but this isn’t a key element in determining prohibited subsidies.

The WTO considers whether Boeing could have launched the 777X and what Airbus have offered without the Boeing subsidies.

The WTO considered potential lost sales for the A350-1000.

“One of the benefits of proving a prohibited subsidies case is that whether or not there are lost sales, it is so illegal that it must be gotten rid of,” says the person familiar with WTO rules.

The previous WTO cases have been referenced above.

The EU and US appealed for different reasons. The WTO appeal decision came down in September, largely affirming the original findings. Both sides again appealed in October. The EU appealed principally on interest rate assumptions used by the WTO on the A350 and A380. The US appealed the rejection of prohibited subsidies complaints.

The WTO ruled that Boeing received illegal subsidies from the US government and from Washington State (the 787 tax breaks). Both sides appealed. The decision on these appeals is due to be handed down next month.