With the effective shutdown by Congress of the U.S. Export-Import Bank — which traditionally has helped overseas carriers purchase planes — Boeing lost a key sales tool. Making matters worse, leasing companies have been hesitant to finance a plane with a dwindling customer base,” Bloomberg writes.

There are already five white tails, aircraft built for customers that canceled or deferred deliveries indefinitely. Nippon Cargo Airlines just canceled two aircraft, scheduled for delivery this year, which takes this to seven. Others that have canceled or deferred: Arik Air and Transaero. A twice-announced “commitment” from Volga-Dnepr Airlines/Air Bridge Cargo 20 747-8Fs failed to materialize more than four.

Boeing reduced production to a mere six per year, or one-half a 747 per month. Even at this low rate, Boeing has a production gap through 2020, when the last firm orders (that have not been deferred) are scheduled for delivery. 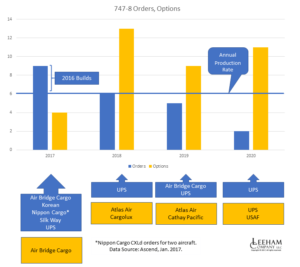 Click on image to enlarge and for a crisp view.

The order last year by UPS for 14 747-8Fs stretch to 2020 and in fact are the only deliveries in 2018 and 2020. There are plenty of options going forward, but with more and more air cargo going via belly capacity in Airbus A330s and A350s and Boeing 777s, 787s and from 2020, the even larger 777-9, demand for new-build, main-deck freighters continues to fall. Long-term soft air cargo demand exacerbates the problem.

Boeing’s self-dealing plan appears to be as much about the 5-7 white tails as it does boosting the demand going forward. The white tails represent an inventory of $750m-$1bn, LNC estimates (based on cost, not list price). The motivation to getting this inventory working and producing (lease) revenue is obvious.

With the US Air Force options for three 747-8s to recapitalize the Air Force One fleet and replace the “Doomsday” command center in 2020, Boeing also needs to fill the production gap.