Return to the living 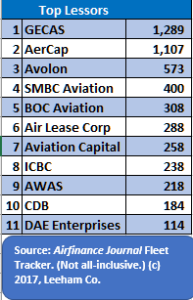 For Enterprises, it makes the UAE-based company a major player in the industry, with more than 300 aircraft in its portfolio.

For DAE, it marks a long return to the leasing business after a near-death experience. Founded in 2006, DAE over-ordered from Airbus and Boeing at the top of the market. The global recession hurt DAE’s leasing business badly. Orders were canceled and at one point, the business became a former shadow of itself.

Its fleet is now 111 (or 114, depending on the source). There are 51 ATR-72s and the rest are jets. The jets come mostly from financial transactions with airlines, rather than speculative orders as in its heyday. The ATRs were acquired in an order for 40 and a portfolio purchase from GECAS.

Going out of business

For AWAS, it’s the end of a long and sometime turbulent life. It was founded in 1985 as Ansett Worldwide Aviation Services, part of the empire that include Ansett Airlines of Australia and eventually Ansett New Zealand. 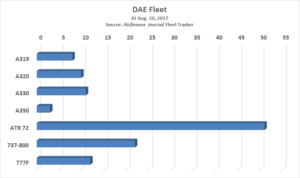 AWAS was sold in 2000 as the Ansett empire began to deteriorate through over-expansion. It was later sold again to Europe’s private equity group, Terra Firma. The company kept AWAS longer than it wanted due to global events, but in recent years began selling off chunks of the portfolio.

AWAS at one point was an active player in placing speculative orders with Airbus and Boeing, but as Terra Firma moved to sell its interest, the lessor’s backlog shrunk.

Lessors today own more than 40% of the global airliner fleet, but continue to represent +/-20% of the backlog. Most transactions are sale-leasebacks (operating leases) or finance leases between the airline and an institution that involve tax considerations.

Operating lessors, like GECAS, Air Lease Corp, AerCap and others, often provide what amounts to a source of capital for airlines that don’t have their own. Fleet planning flexibility also can be a motive for airlines to turn to operating lessors. Another reason to lease a plane: growth plans may come at a time where the manufacturers don’t have delivery slots, while the lessors that placed speculative orders do.

One Comment on “Pontifications: DAE acquires AWAS, moves up in lessor status”