Nov. 6, 2017, © Leeham Co.: One of my stops during my October visit along the I-10 corridor from Mobile (AL) to New Orleans, through Mississippi, visiting aerospace interests was the Stennis International Airport.

The airport is in Hancock County, an hour’s drive east of New Orleans.

This is on the eastern edge of the Stennis Space Center I wrote about last week and it benefits from being in the Space Center’s shadow. The Space Center is exempt from noise regulations. So is the airport, which enables this one-runway field to be a way point for noisy military jets and trainers and a training location for helicopter-based special forces. These are all noisy aircraft that locals view as routine, says Kevin Carlisle, director of the airport. 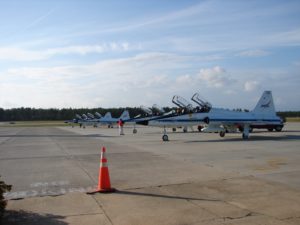 In a tour arranged by the Mississippi Development Authority, we arrived at lunch time. Walking into the unassuming terminal, I felt like we arrived at an air force base. The place was filled with pilots in jump suits. Looking out the ramp-side windows of the terminal explained why. Lined up on the tarmac were Northrop T-38s, a twin-engine aircraft assigned to NASA pilots.

Carlisle explained that Stennis Airport is a way point between Houston, where NASA’s Johnson Space Center is located, and Cape Canaveral in Florida. The pilots stop to refuel at Stennis—and in this case, have lunch.

There were also single-engine jet trainers on the ramp, adding to the presence of jump-suited pilots.

But this was only the tip of the iceberg, so-to-speak. 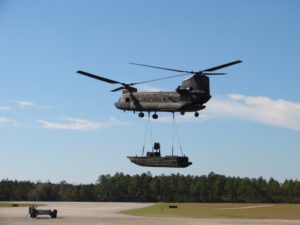 The Air Force, National Guards and other services use Stennis for training, daytime and at night, often with those noisy helicopters. Because the airport is included in the Space Center’s noise exemption rules, the armed services don’t have to worry about noise complaints, Carlisle says. Not that the neighbors, who really aren’t all that close, complain. This is a strong military-supporting area and the men and women in uniform are welcome.

Training includes rappelling from choppers, parachuting put of them and landing and deploying from them.

Some of the training is in preparations for classified missions.

There is also a Lockheed Martin C-130 maintenance base at the field. The company is headquartered in, of all places, Tyonek, Alaska, near Anchorage, and takes its name from the city/tribe. The company performs light maintenance and focuses more on modifications of Navy, National Guard C-130s and these aircraft that are now operated by private industry. The oldest C-130 in operation was on the ramp at the Tyonek hanger awaiting its turn. It’s operated by an aerial pollution control company.

Tyonek plans an expansion at Stennis to keep up with demand for C-130 work.

Stennis Airport also supports commercial activities, though not in the context of airline operations. Rolls-Royce has an engine testing facility at the near-by Space Center, as I wrote last week. Big engines are flown into Stennis on the giant Antonov AN-124 cargo airplane and trucked to the RR facility at the Space Center. 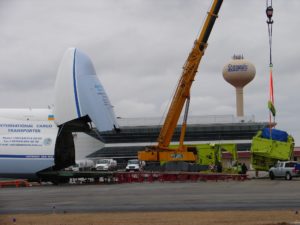