January 02, 2018, ©. Leeham Co: The past year was difficult for Mitsubishi Aircraft Corporation (MAC) and its MRJ regional airliner. Although clear progress was made in the flight-testing of the MRJ, problems were found with the aircraft’s avionics and cabling redundancy.

The result is an avionics and cabling systems redesign which pushes out first delivery from 2018 to 2020. It’s the fifth and the longest delay of the program. 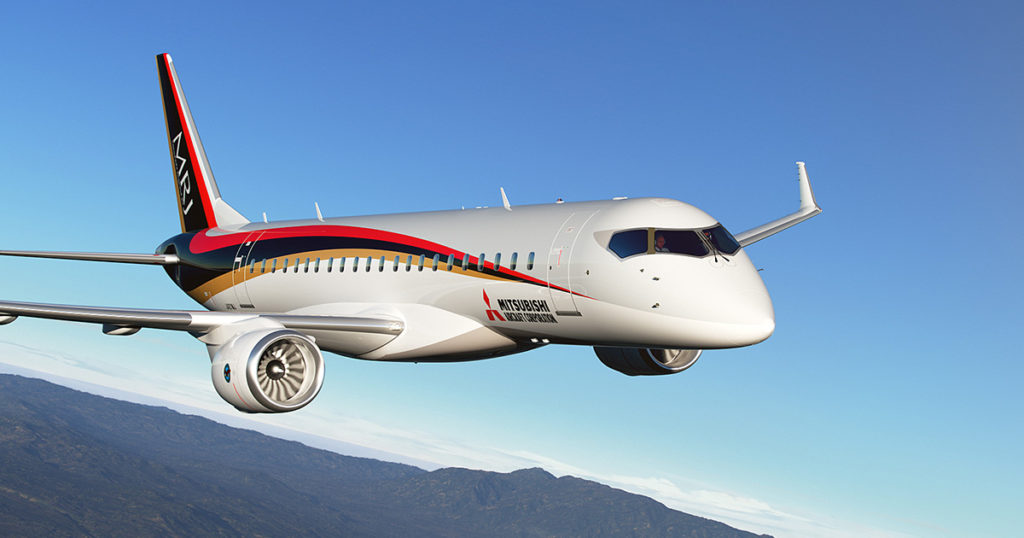 The MRJ program was launched March 2008, with the first delivery of the MRJ90 version to lead customer All Nippon Airways (ANA) 2013.

After several delays, the first MRJ90 prototype flew November 2015. Delivery was now moved to 2018, as a redesign of the wing-body join area and the landing gear was necessary.

Flight-testing of the MRJ started in Nagoya, Japan, but was moved from the busy Nagoya area to the non-congested Moses Lake (WA) in the USA. For this purpose, experienced flight-testing consultants were engaged.

As these prepared the test plans for the MRJ in cooperation with MAC, they realized the aircraft had flaws in its avionics and cabling redundancy. From our June 2017 article:

When MAC engaged Aerotec L.L.C. of Seattle to aid with flight tests and certification, the experienced Aerotec team began analyzing how the MRJ should be certified. They soon saw problems with the criteria for safety for avionics and its wiring. Damage from explosion/engine part penetration, water flooding (from a ruptured fresh waterline) and fire damage to the avionics and its wiring could cause single point of failure.

The separation of avionics functions and its wiring would not pass the tests in the two below deck avionics compartments in front of and aft of the wing. As an example, the landing gear controller, while being dual channel, had both functions in one box. One event could knock out the landing gear extension function.

This discovery had several consequences:

The flight test program scheduled for 2,500 flight hours with five flying aircraft and two ground test items is now planned for 3,000 hours and nine aircraft. Two redundancy conform aircraft will join the program in second half of 2018. They will perform the added radio and electromagnetic interference testing needed and join functional/reliability testing followed by operational route proving.

The many delays have affected customers orders. The MRJ has 243 orders from eight customers. But there hasn’t been a new order in 18 months and MHI President Miyanaga announced just before Christmas, the Eastern Airlines order of 20 MRJ90s, is likely to be cancelled.

The large orders from Trans States Holdings (50) and SkyWest (100) are troubled as well. The regional carriers fly for mainline airlines, who have scope clause agreements with their pilot unions. These agreements regulate the size of the aircraft the regional contractor may have and the number of aircraft he can operate with.

The MRJ90 and smaller MRJ70 were not designed to fit the present US scope clauses. The larger MRJ90 is too heavy to fit under the Maximum Take-Off  Weight (MTOW) allowed in the scope clauses. The smaller and lighter MRJ70 could be offered in an MTOW version fitting the MTOW limit, but its cabin is too short to allow the 76 seats three-class cabin wanted by the mainline customers.

MAC expected the scope clause negotiations taking place autumn 2016 to change the MTOW limit. It didn’t and it’s now doubtful the limit will change in the next negotiation rounds, 2019.

While Trans States Holdings and SkyWest could buy the smaller MRJ70 to fit the present clauses, there are more suitable aircraft available from Embraer (E175) and Bombardier (CRJ900). These seat 76 passengers in the wanted First, Premium economy and Economy class.

It’s anyone’s guess what will happen with this 67% of MAC’s order backlog, should the US Scope Clauses not change 2019 or the years thereafter.

The MRJ project has been painful for MAC and MHI. The original time plan has gone from five years to 12 years and project cost has more than doubled. If the business plan was to introduce a competitor to the regional aircraft market, a normal project would have been axed. But it wasn’t.

After decades of acting as a sub-supplier to a growing air transport market, Japan decided to become a player in the market. The MRJ is the start of this journey.