June 25, 2019, © Leeham News: Mitsubishi Heavy Industries and Bombardier today announced an agreement in which MHI will acquire the CRJ

program, subject to customary shareholder and regulatory approvals. Closing is expected in the second half of next year.

The CRJ program includes the airplane, the global product support and sales force, manufacturing facilities and other assets. A CRJ installed customer base of 1,300 airplanes and more than 130 operators worldwide.

“Bombardier will continue to supply components and spare parts and will assemble the current CRJ backlog on behalf of MHI. CRJ production is expected to conclude in the first half of 2020, following the delivery of the current backlog of aircraft,” the companies said in a statement.

It does not include the Aerostructures facilities in Belfast, Northern Ireland, or in Morocco. The Belfast plant builds wings for the A220 and the Moroccan facilities builds parts. Neither is associated with the CRJ program, but after Bombardier announced these were for sale, there was some market speculation MHI might seek to purchase these in connection with the CRJ transaction.

MHI is the parent of Mitsubishi Aircraft Corp (MITAC), which is developing the M-Series regional jet. This was launched as the MRJ and was rebranded before the Paris Air Show as the M-Series and SpaceJet.

The key benefits to MITAC are the global product support system, the global sales force and the installed customer base. 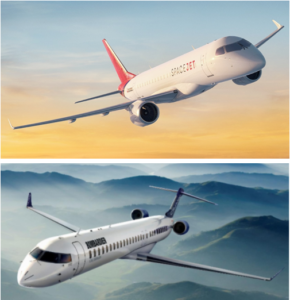 “MHI will acquire Bombardier’s regional jet program for a cash consideration of $550m, payable to Bombardier upon closing, and the assumption by MHI of liabilities amounting to approximately $200m,” MHI said. “Under the agreement, Bombardier’s net beneficial interest in the Regional Aircraft Securitization Program (RASPRO), which is valued at approximately $180m, will be transferred to MHI.”

The $200m in liabilities represents a portion of the Residual Value Guarantees Bombardier is liable for with the CRJ program. Bombardier retains about $400m in these liabilities.

“MHI has a decades-long history in Canada, and I hope this transaction will result in the expansion of our presence in the country, and will represent a significant step in our growth strategy,” said Seiji Izumisawa, President & CEO of MHI.

The installed customer base and global support system, backed by the existing sales and product support personnel, are the top benefits to MITAC. 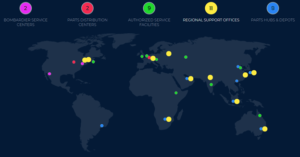 Establishing its own global product support system, including personnel, would take MITAC the better part of a decade at an unknown cost. With the acquisition, MITAC gets physical facilities and personnel who have the experience and contacts to support the new M-Series as it comes on-line.

The installed customer base, supported by the CRJ sales force, gives MITAC instant access to more than 130 operators with 1,300 CRJs. 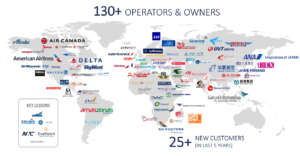 This access, and the availability of a new generation airplane from MITAC which Bombardier could not offer, will be of immense value to MITAC.

The CRJ itself is of limited value to MITAC, but it may serve a useful purpose.

While the CRJ itself doesn’t seem to fit with the SpaceJet business model, there is a logic to a synergy between the two airplanes. While CRJ “is expected” to end next year, a case can be made for MITAC continuing to sell the airplane.

The MRJ90, now renamed the M90 SpaceJet, is not compliant with the US Scope Clauses in pilot labor contracts; it’s too heavy. The M90 may be used anywhere else in the world. Entry-into-service is 2H2020.

The revised design of the Scope-compliant MRJ70, now called the M100 SpaceJet, won’t be available until beginning in 2023.

There is a production ramp up for each that, like any new aircraft program, will be slow and deliberate.

The CRJ900 is Scope-compliant and the CRJ-1000 has found some traction—though not much—in Europe. (The CRJ700, while still offered, is for all practical purposes a “dead” airplane.)

There is a surge of ERJ/CRJ and even EJet potential retirements beginning from about 2023/24.

The mechanism of producing new airplanes to bridge until the M90, M100 or the prospective new M200 (the redesigned M90, incorporating the M100 features) will take creative thinking and deal-making, but it can be done.

Bombardier gets cash, of course, and out from under some RVG liabilities. It gets out of the commercial aviation business (except for retaining a ~33% share of the Airbus A220 program and, until sold, the Aerostructures facilities). It off-loads a dying CRJ program.

Benefits to Canada and Quebec

The governments of Canada and Quebec are concerned most about maintaining jobs and the supply chain.

MHI’s acquisition of the CRJ program opens the possibility that MITAC could choose Montreal Mirabel, where the CRJ production line is, for the potential SpaceJet line.

MITAC already has said a North American production line could be in the future for the SpaceJet. With the CRJ now in the family, Montreal becomes a contender.

The Dallas-Ft. Worth (TX) area: MITAC’s sales office is in the Dallas suburb of Plano. D/FW (as it is called) has an existing, robust aerospace cluster and on the fringes, lots of space. Alliance Airport in Ft. Worth was at one time a major maintenance base for American Airlines and it is a hub for FedEx. Texas likes to give corporations big tax breaks. Weather is generally good if you discount a propensity for tornados.

The US South: Discounting Texas, there are Alabama (home to the A220 and A320 final assembly lines and Boeing Defense Huntsville), Georgia (Lockheed Martin), Florida (the Space Coast and Embraer’s corporate and some military FALs) the Carolinas (Boeing 787 FAL 2, Honda Jet, Spirit Aerosystem’s A350 production center) and Tennessee (Triumph Group’s A330 supply center). The South is another area where corporate tax breaks and other incentives are popular and generous.

Washington State: Despite Renton being MITAC’s brand new US corporate headquarters location and Moses Lake being the flight test center, this could be a tough call. Western Washington is solid Boeing territory. Labor costs are high and so is the cost of doing business. Land is scarce. Boeing competes for labor, especially as it faces some 10,000 retirements in the next few years of its engineering and touch-labor workers. Housing costs are among the highest in the nation.

Moses Lake is a dinky city of 24,000. It has no air service to Seattle (it’s a 2 ½ hr drive over the Cascade Mountains, a hazard in winter), or to Spokane, a “spoke” city that only goes to other hubs and a 90 minute drive to the east. Amenities and cultural attractions are non-existent for city folk who might be offered a transfer there. The work force pool is also limited.

Lawsuits likely will be dropped

Although the companies did not address the issue, this deal likely means the lawsuits filed by each of them against the other in Federal court in Seattle will be dropped.

Cowen & Co. issued this note in the wake of the announcement:

BBD’s proposed sale of its CRJ program to MHI results in about $170MM of net value for BBD. MHI will be getting (1) CRJ aftermarket facilities and profitable revenues of ~$400MM/year and (2) CRJ production, which currently is in the red. However, the deal neutralizes BBD’s CRJ RVG liability, which amounted to an est. $589MM at the end of Q1 and a worst case of $1.1B in total exposure. In addition to its $550MM payment to BBD, MHI will take $200MM in net RVG liabilities and BBD will retain $400MM of the RVG liability. However, BBD’s liability will be fixed at $400MM eliminating the downside risk of a worst case increase if CRJ values continue to decline. Because MHI also will receive BBD’s $180MM aircraft securitization asset, the total transaction should yield about $170MM for BBD. It’s expected to close in early 2020 and includes a reverse break-up fee to protect BBD in the unlikely event it fails to receive regulatory approval.