November 8, 2019, ©. Leeham News: We started the series on analyzing the Lion Air JT610 crash based on the final crash report last week by looking at what went wrong with the aircraft’s Angle of Attack sensors.

Now we continue with looking at why an MCAS system is needed in an aircraft like the Boeing 737 MAX and why a correctly designed MCAS is not an irrational addition to the aircraft.

A note about the series

Before we go into the rationale for a system like MCAS, let me clarify how this series is intended. We are NOT rehashing the complete MCAS story in every article and how bad its initial implementation was. This has been done by us and other media over the last 11 months since the existence of the 737 MAX MCAS was revealed.

Rather we are methodically going through the themes around MCAS in more detail, now with the additional information provided by the final report. We cover one theme in depth in each Part of the series.

By it, we can correct and give context to a number of misconceptions around MCAS which has grown through the exhaustive but not too deep press coverage, where many times the interest has been to find more compromising data rather than correctly describe things as they are (the reporting around the Boeing pilots chat is a good example of this).

By covering the different aspects in detail and at the same time provide the state of the industry around these details, we try to give enough depth and context around the subjects so everyone can form more informed opinions.

Why do we need a Maneuvering Characteristics Augmentation System, MCAS?

The type of system that MCAS represents is no oddity for airliners. The need for such a system for the 737 MAX was triggered by mounting larger engines on the aircraft, but there was already similar augmentation systems in operation on the 737NG, the previous generation 737, and on other airliners.

The reason for MCAS is a shift forward of the aerodynamic center at high Angle of Attack (AoA), caused by the larger and more forward-mounted engines, Figure 1. 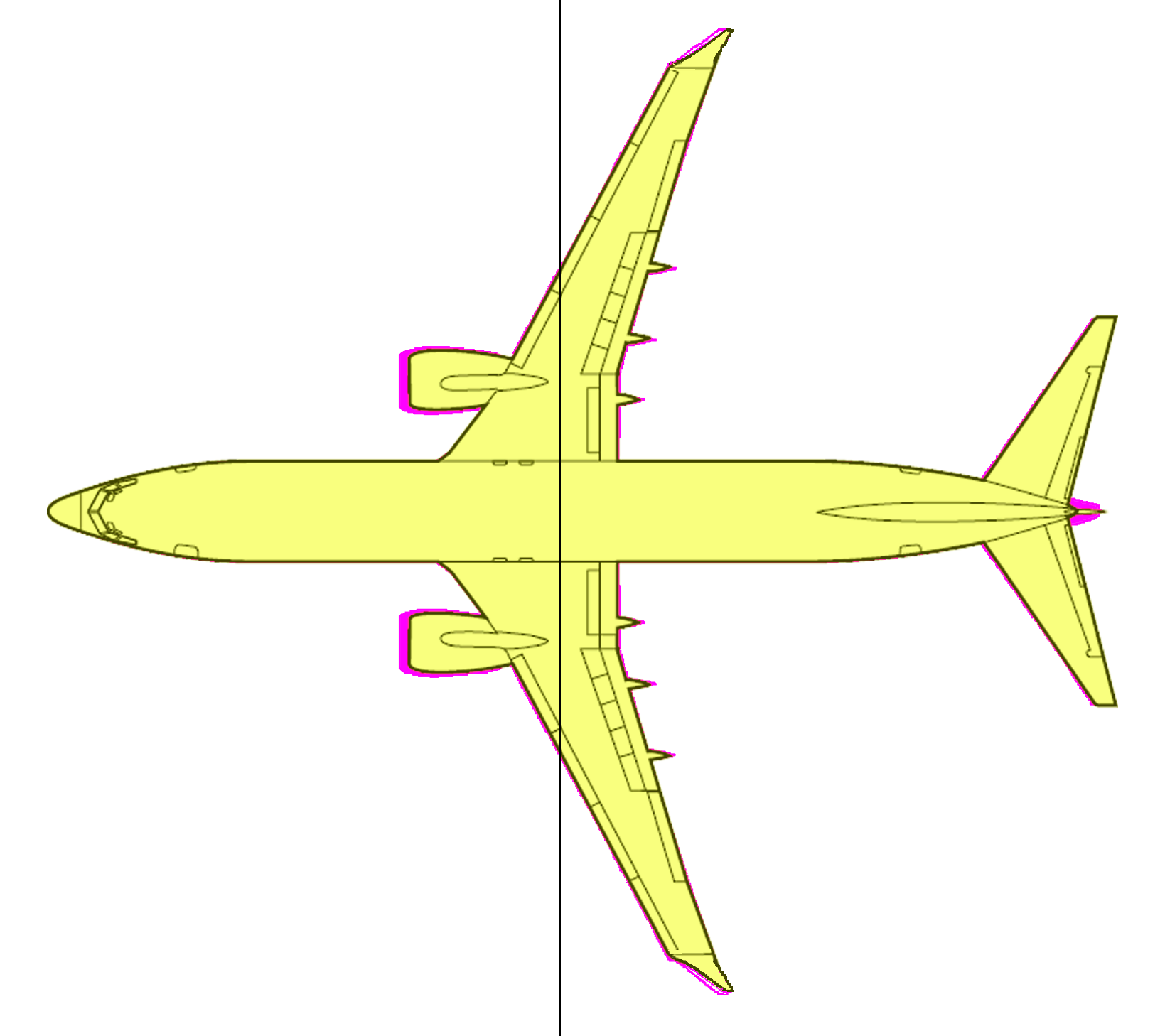 The larger nacelles, sitting further forward of the wing affect the flow of a clean wing (a wing with no slats or flaps deployed) at high Angle of Attack (AoA). The result is a moving forward of the wing lift, reducing the aircraft’s pitch stability margin at high AoA.

In aircraft engineering terms, it’s not a “pitch up” situation, as a further increase of AoA requires an increase in yoke force, but the magnitude is reduced. This is felt like a “pitch-up” by the pilot. It feels like the aircraft is pulling Gs by itself in the maneuver, which is not a nice feeling. An MCAS type system is then needed to help the pilot with a consistent feel when maneuvering in this extreme region.

There is another “Shift of aerodynamic center” augmentation system active on every airliner in the world, the Mach tuck system.

Speed Trim System for the 737

It’s important to understand Speed Trim System because its existence on the 737 is the major reason the JT610 crew could not identify MCAS going active and what it tried to do. This has not been covered in the hundreds of articles around MCAS, as it’s complicated to understand and explain for most writers. 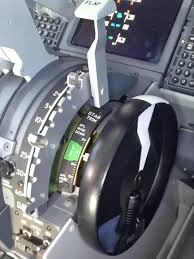 It happens at every climb after takeoff (speed increases) and during every descent and approach for landing (speed decreases), which are the phases where a pilot flies an aircraft manually. At cruise, the autopilot is engaged and Speed Trim and MCAS are not active.

The trimming of the aircraft in the background is very visual in the 737, the large trim wheels with their white stripe (Figure 2) are centimeters from the pilot’s thighs. You see the wheels spinning in your peripheral vision when flying.

MCAS, a system which should never activate

It’s also important to understand MCAS is a system augmenting the behavior of the MAX way outside the normal flight envelope. In daily operation, a 737 MAX flies with an Angle of Attack below 7° to 8° and never passes 1.2 G in load factor (in fact it rarely passes 1.15 G, the load factor for a 30° bank turn).

MCAS is programmed to activate at almost double this AoA value and the pilot need to pull around 2G or more to get to where MCAS will be active. No person would stand up in the cabin if the pilot is flying like this. A mega-crisis situation is needed for an airliner pilot to need to pull 2Gs or more. I know no airliner pilot which has been even close to 2G during their flying of airliners in regular operation. Test pilots can reach these values to control the correct behavior of a new or repaired aircraft but even this is rare.

You only go to this corner of the flight envelope if the aircraft is in the utmost crisis. As MCAS is only needed when the wing is clean (no slats or flaps deployed), this means you are turning extremely hard to avoid a mid-air collision or maneuvering through extreme turbulence. If you hit clear air turbulence, you don’t maneuver as a pilot as this can worsen the effect of the turbulence. The only case where maneuvering might be needed is when passing strong wake turbulence of another aircraft (you can get a strong change in pitch and roll angle). But even then 2 G or more and more than 10° AoA is extreme maneuvering.

The consequence is, the likelihood an airliner pilot ever running into a situation where a correctly triggered MCAS would go active is highly improbable.

This is described to give context to why FAA accepted Boeing’s suggestion MCAS didn’t need to be described to the pilots. I don’t endorse this decision by writing the above. But as said, we need the correct context to be able to form a correct opinion. We can’t ask people to understand what is normal and what is abnormal in an airliner’s operation if we don’t spend time describing it.

Could MCAS have been implemented aerodynamically?

Yes. It would most likely be as large aerodynamic strakes at the lower rear part of the fuselage like seen on Learjet business jets, Figure 3. 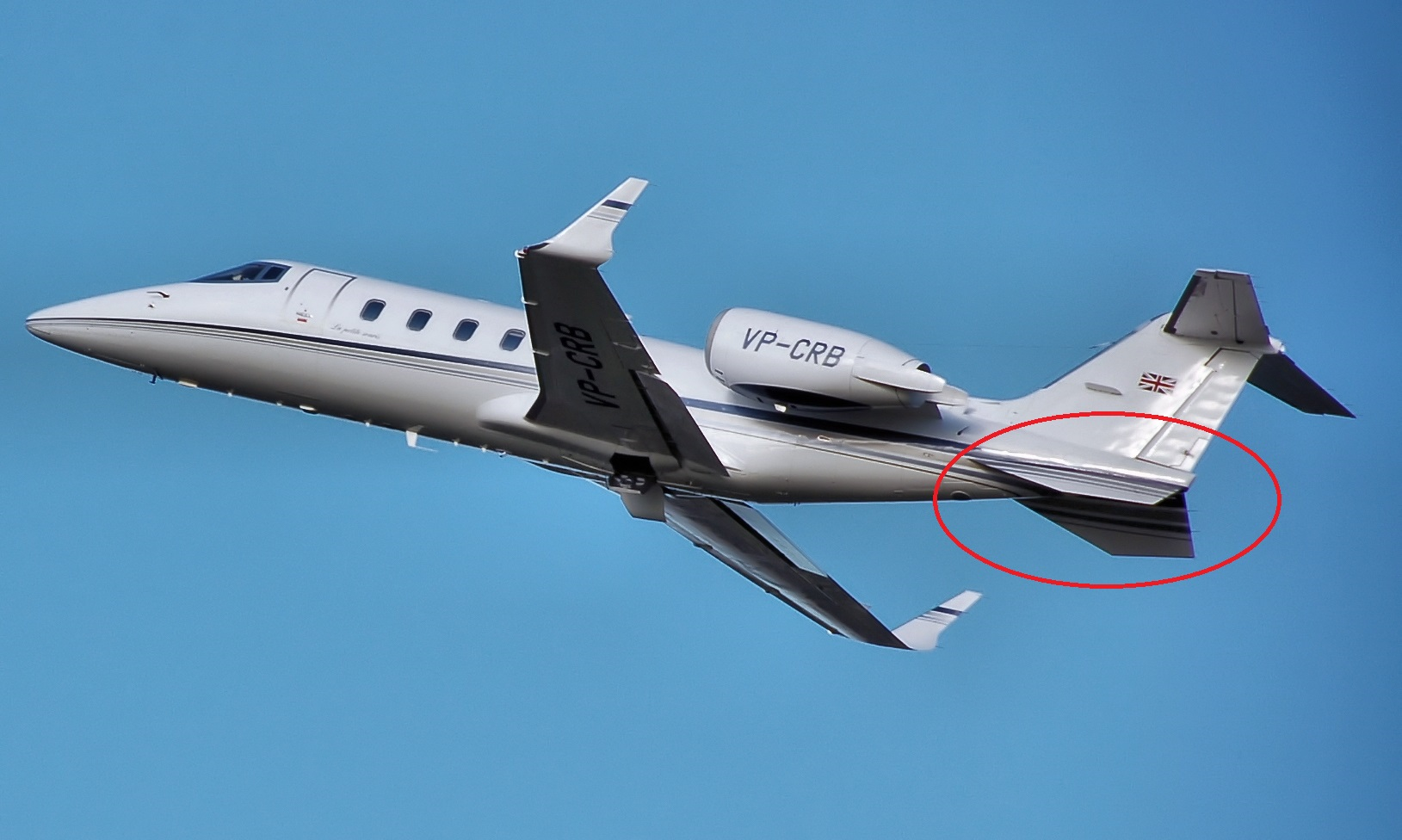 These strakes would add weight and drag for every flight during the aircraft’s life for a function that should never be used. The implementation of the MCAS function as software, re-using the functions of Speed Trim is, if done correctly, a rational decision.

In the next part of the series, we will look at the Boeing assumptions around how a rough MCAS would be recognized and contained and how the reality looked in JT610 based on detailed information in the final report and the things we discussed in this Corner.