Branding the re-engined airplane required retaining the 737 name, focusing on the commonality between the popular workhorse 737 NG, improvements over the NG and advantages over the neo.

Branding is always a struggle. Get the name, product and positioning right, and you have a winner. Get it wrong and you have an Edsel.

In those early days, Boeing had no reason to think there would be trouble in the distant future.

The MAX name wasn’t a barn-burning winner, people told LNA at the time. But a better one could not be thought of. 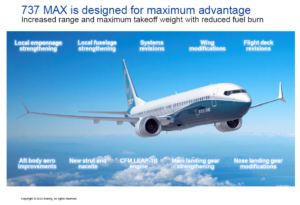 The 737’s base design dates to the 1960s. The 737 was the last of the era’s small jets. The Sud Aviation Caravelle led the way in the late 1950s. This was followed by Boeing’s own 727-100, the de Havilland Trident, the British Aerospace BAC-111 and the Douglas DC-9. All were intended for the short-to-medium haul markets as airlines transitioned out of piston- and turboprop-powered airliners.

By 2011, the A320 surpassed the 737 with more modern technology and in the all-important sales.

Boeing’s corporate communications, which has been so bad in the wake of the two MAX disasters, is very good when the messaging is sunshine news. And the message about the MAX with its old 1960s roots was masterful. 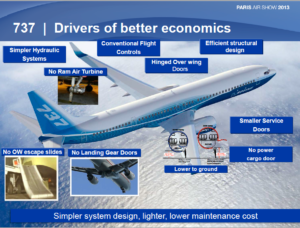 Maintaining the original 1968 certification of the 737-100 by the FAA was also important in the development of the MAX.

All subsequent versions of the 737 were known as minor model variations rather than becoming a new airplane requiring a new certification, which would add substantial costs and development time for Boeing and transition costs for the airlines.

Boeing was adamant that the MAX be so similar in design and flying characteristics that minimal pilot training and fleet preparation would be required by airlines.

This, is must be stressed, is not an unusual goal. It is one sought by every airplane manufacturer. No criticism of Boeing’s desire is warranted. But this goal did drive decisions that now have come under criticism due to the Lion Air and Ethiopian Airlines accidents.

Boeing’s messaging in 2012, the year following the July 2011 program launch, stressed how the MAX will complement the 737 NG. 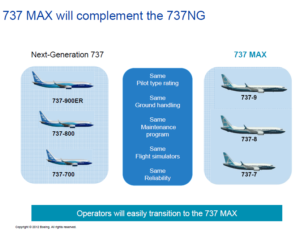 What catches the eye today in the aftermath of the two MAX crashes is the promotion above that the NG and MAX share the “Same Flight simulators.”

Much has been made about the few MAX simulators available to customers, which by now is more than two years after entry-into-service.

Following the two fatal MAX crashes, some airlines used their NG simulators to program in MCAS events. It’s unclear how closely the NG sims can replicate the MAX flight characteristics, but this was Boeing’s 2012 messaging.

Placing the larger diameter engines on the low slung 737 was a problem when Boeing re-engined the airplane the first time.

When Boeing created the 737-300/400/500, using CFM56 engines, the larger diameter required what was then a unique solution: flattening the bottom of the nacelle to maintain ground clearance.

The even larger MAX engine, the CFM LEAP, required another repositioning of the engine. 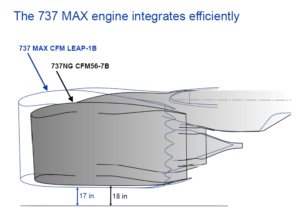 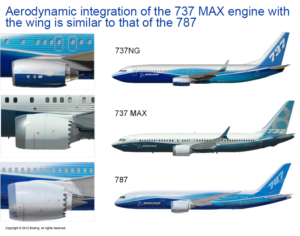 Yet there was a fine balance of where the MAX engine was located, a former Boeing engineer told LNA this week.

The placement considerations included the attitude the plane would sit on the ground in the event of a wheels up landing. If the attitude changed significantly from the NG, overwing exit emergency slides would be required (the absence of which Boeing promoted in Figure 2). Additionally, under some scenarios, the exit limit would be reduced from 189 to 175 passengers, LNA was told.

Given the high profile of the size placement of the engine and its lift effect, which led to the development of MCAS, the next question is obvious: did this consideration have ramifications that led to the need for MCAS? The answer was no, the engineer didn’t think so.

It’s too soon to predict where the accident investigations and those by Congress, a federal grand jury, the FBI, Department of Justice and Department of Transportation will lead. Then there are the civil lawsuits.

It is uncertain when the grounding orders for the MAX will be lifted.

These investigations are still in their infancies.

← Mitsubishi sets stage for announcement at Paris
Bjorn’s Corner: Why I wouldn’t hesitate to fly on the MAX after the fix →

6 Comments on “How Boeing named, promoted the MAX in early days”