A tangled web at the HNA Group

Nov. 18, 2019, © Leeham News: The HNA Group, a Chinese conglomerate with a heavy focus on aviation, has been in the spotlight for a few years as its financial condition deteriorated.

Its current state came from its debt-fueled global acquisition spree, then the challenges in deleveraging.

At some point, the group owned stakes in 20 airlines in Mainland China and abroad. Other notable acquisitions include lessor Avolon, Swissport, Servair, SR Technics, and stakes in two foreign airports.

The HNA Group does not publish accounts. LNA went through the financial statements of its flagship subsidiary Hainan Airlines, since 2000, with the goal of better understanding the group structure and assess the airline business profitability.

Hainan Airlines started operations in 1989. Its main base is in Haikou, the capital of the Hainan island in the South China Sea. George Soros was among the early investors, buying a 25% stake in 1995. At the time, it was the first foreign investment into a Chinese airline. Hainan Airlines operated seven aircraft and flew to 21 Chinese cities.

At the turn of the century, Hainan Airlines generated ¥2.3bn in annual revenues. The HNA Group started that year, embarking the airline embarked on an aggressive expansion strategy. By 2018, annual revenues had multiplied by almost 30 compared to 2000. The airline grew revenues at a 20.7% compounded annual rate.

Hainan Airlines did not exclusively grow organically. The airline purchased a stake or created Air Chang’an in 2000, Lucky Air in 2004, Grand China Air and Tianjin Airlines in 2007, Fuzhou Airlines and Urumqi Air in 2015, and GX Airlines in 2015.

Along with parent HNA Group

The two HNA shareholders are the Hainan Traffic Administration Holding (70%) and Jianyun Investments (30%). The former is an investment vehicle of the Hainan provincial government.

Facilitated by the unprecedented monetary stimulus in the Great Recession aftermath, the conglomerate went on a debt-financed acquisition spree. In 2016 alone, the HNA group invested in Air Guilin, Azul, Atlantic Gateway (one of the principal TAP Air Portugal shareholders), and Virgin Australia Holdings.

The HNA group also invested in numerous other aviation-related businesses. The most notable one is Avolon, through its Bohai Capital subsidiary, in 2015. Avolon went on to purchase CIT Leasing in 2017 to become the third-largest aircraft lessor at the time.

Other notable acquisitions include Swissport in 2015, SR Technics in 2016, and Servair in 2017. The conglomerate also invested in Frankfurt-Hahn airport and the consortium that owns Rio Galeão airport in 2017.

Hitting a (lack of) liquidity wall

The debt-fueled growth raised many eyebrows and eventually ran into trouble.

The reckoning came in early 2018 through an asset reorganization. Hainan Airlines delayed its earnings releases and suspended trading in the shares for six months.

The airline received a negative opinion from its auditors for lending ¥6.57bnto parent HNA Group subsidiaries borrowed from banks. Hainan Airlines’ parent company used the proceeds to repay maturing debt. This loan violated limits on the guarantees a public company can provide to affiliated subsidiaries.

The HNA Group is now in the hands of a creditor group, called the Assets Supervision and Administration Commission. The group is in the process of selling as orderly as possible the numerous stakes acquired over the years, including airlines.

However, Airbus A330s and A350s and Boeing 787s scheduled for delivery are still with OEMs or found new takers. Those include two A350-900s apiece to Fiji Airways and South African Airways, two VIP 787-9s, one 787-9 to Vistara, and the Dreams Take Flight aircraft dedicated to Boeing employees.

We will now turn our attention to the HNA Group’s ownership model.

The HNA Group and Hainan Airlines do not fully own most of their subsidiaries.

In Mainland China, they are either majority or minority shareholders with a provincial government or investment vehicle.

Hainan Airlines has direct stakes in the following airlines:

LNA could not establish the stakes owned for four of those airlines. The HNA Group is also discussing the creation of Hubei Airlines with the Hubei Jiaotong Investment Group.

One should note that most of those subsidiaries are in secondary Chinese cities. Local governments are eager to set up and subsidize those airlines to improve connectivity, including long haul destinations to Europe, North America, and Oceania. The Big Three Chinese carriers also operate in similar fashion long haul flights from secondary cities.

The HNA Group still owns stakes in a few airlines outside Mainland China.

A 29% stake in Hong Kong Airlines, Frontier Investment Partners (34%), and Zhong Guosong (27%) being the two other shareholders. The airline also set up a dedicated cargo subsidiary, Hong Kong Air Cargo. The airline is in severe financial difficulties compounded by the ongoing protests in Hong Kong.

The second major one is 20% in Virgin Australia Holdings, acquired in 2016. The remaining stake is Ghana-based Africa World Airlines, a joint venture with Chinese and Ghanaian shareholders.

The conglomerate used to have many more stakes:

Below is a summary of the various HNA Group and Hainan Airlines Aviation focused subsidiaries: 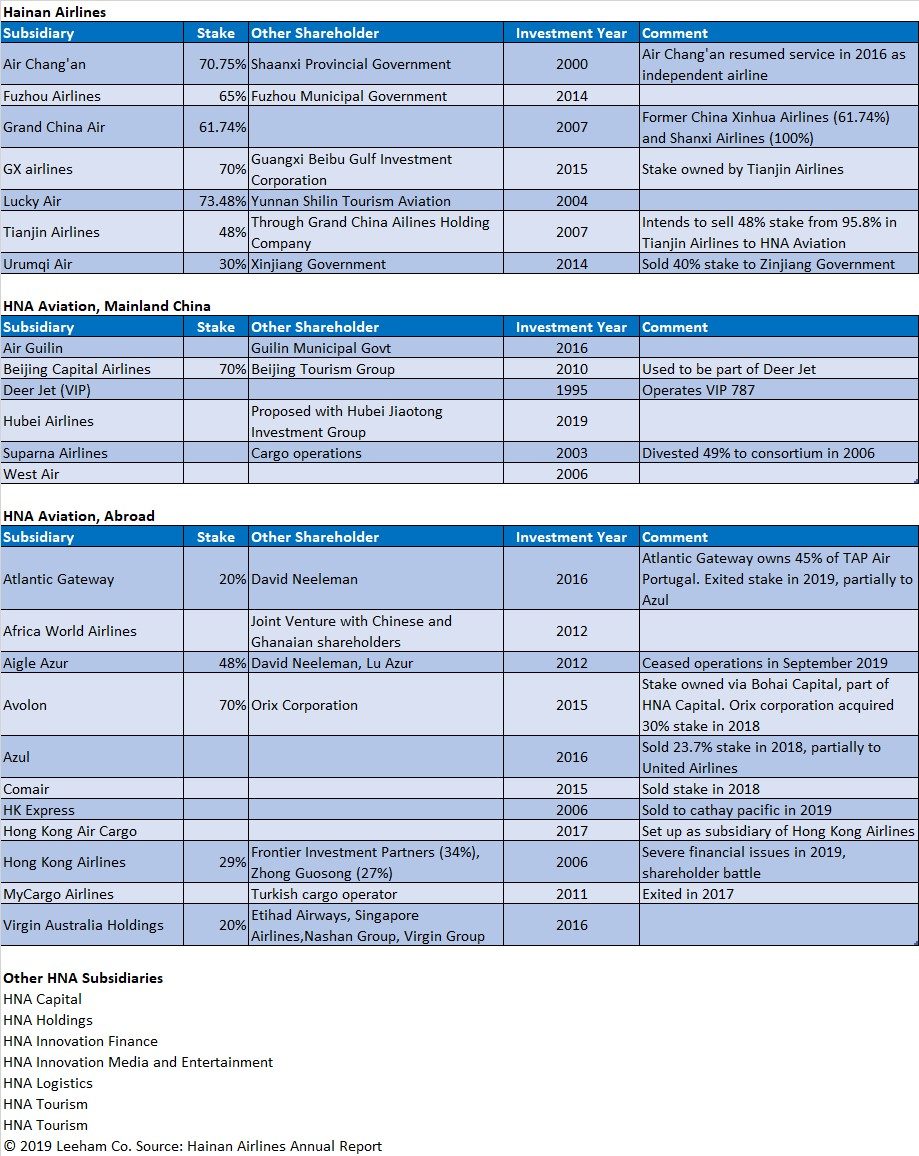 As mentioned earlier, Hainan Airlines grew dramatically since 2000. We will focus on the years after 2008.

However, one should note four components that boosted net income over the period: 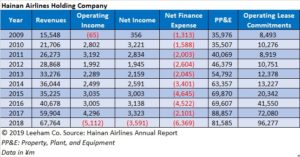 The first three components boosted gross income by¥8.6bn. If we were to include government subsidies and grants, it is reasonable to assume those non-operational items increased net income by around 50%.

One should also note that asset disposal became a source of profits from 2013. Between 2013 and 2018, operating lease commitments increased from ¥12.4bn to ¥96.3bn. The airline engaged in sales and leaseback transactions to boost profits.

Below is a plot of revenues, PP&E (Property, Plants, and Equipment), and Operating leases, with 2010 as reference year: 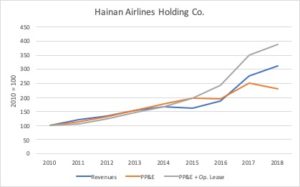 While revenue grew in 2018, the value of aircraft on the balance sheet decreased. If we include operating lease obligations, revenues have significantly lagged balance sheet expansion since 2015.

While lower fuel prices partially explain the revenue lag, it is mostly due to the addition of A350s and 787s for long-haul services. It is no secret that revenues on international flights have lagged, with a load factor in the low 70% range.

Hainan Airlines recorded a negative investment income in 2018, instead of ¥1.2bn the previous year, and a ¥1.8bn asset impairment. The carrying value of its equity investments on the balance sheet dropped from ¥22.3bn to ¥18.9bn. It recorded a ¥-3.6bn loss for the year.

As mentioned earlier, the airline is in the process of selling 48% of Tianjin Airlines to its parent HNA Group. It also has around ¥30bn worth of borrowing maturing later this year.

HNA Group and its flagship subsidiary Hainan Airlines, are in the process of divesting their debt-fueled acquisition spree. A lot of work still lies ahead to restore financial help. With sizable upcoming debt maturities, they will need help for Chinese banks.

Bohai Capital managed to sell a 30% stake in Avolon to Orix Corporation. It hasn’t yet managed to sell the rest. The lessor has been doing all in its power to shield itself from the parent company’s troubles and maintain an all-important investment-grade rating.

← Pontifications: A new setback for Boeing
Airbus: We should fly like geese to save fuel and CO2 →