Bjorn’s Corner: Why e in ePlane shall stand for environment, Part 14. Parallel Hybrid.

March 20, 2020, ©. Leeham News: In this week’s Corner, we continue our analysis of what it means for a regional airliner to go from Turbofan propulsion to Hybrid Electric propulsion. Last week, we looked at a Serial Hybrid.

Now we analyze a Hybrid where the electric power applies in parallel with the gas turbine power.

How does a Parallel Hybrid compare with Turbofan propulsion

We use the Embraer 88-seat E175-E2 for our test of a Hybrid powerplant as last week, Figure 1. We could then see the Hybrid Electric propulsion had little chance to compensate for the effects of the added weight of the batteries needed in a Hybrid configuration.

The aircraft flies the complete mission with a minimum of 6t added weight (the weight of the batteries). The extra weight set back the efficiency of the mission with 9.3% and hybridization of the powerplant can’t regain such a loss. 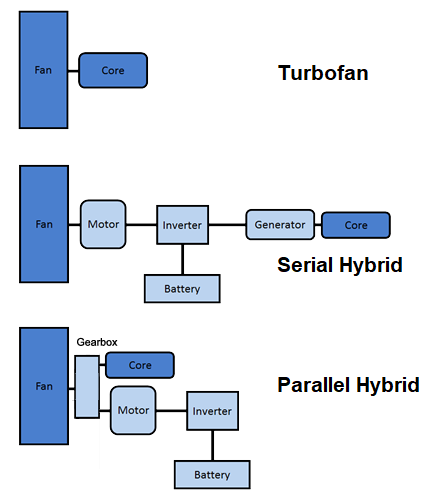 For a Turbofan, the gas turbine core drives the fan directly.  For the Serial Hybrid, an electrical motor drives the fan. Energy to the motor is feed in parallel from the battery and a gas turbine-driven generator.

The Parallel Hybrid we look at today couples the gas turbine and electric motor in parallel to the fan via a gearbox. The motor takes energy from the battery via an inverter.

The Parallel Hybrid is both simpler (no generator, the motor can work as a generator to charge the battery if needed) and more complex, as we need a gearbox to combine the power of the gas turbine and electric motor.

We would need a motor/generator of about 1,000kW to complement the 11,000kw the gas turbine shall develop (the engine core on an E175-E2 delivers about 12,000kW to the fan at takeoff power).

We now have a smaller motor and inverter and no generator, for a trade of a gearbox. This is a lighter configuration than a Serial Hybrid, but the elephant in the room remains. We still have a battery that weighs 6 tonnes when we want to trade 75kg of jet fuel consumption for grid battery power (if we don’t precharge the battery we gain nothing. In fact, we lose efficiency as the routing: core to the generator via the inverter to the battery and then later back through the inverter to motor causes us at least a 10% energy loss).

If we keep the assumption of equal weight for the Turbofan propulsion and the Parallel Hybrid (which still is the best case for the Hybrid), we keep the 9.3% deficiency in fuel for the trip for the Hybrid due to the added battery weight.

Would a 9% Parallel Hybrid (1000kW combined with 11,000kW) reduce the fuel consumption of the gas turbine? Yes, by the energy input from the battery but not from making the gas turbine smaller.

Making a gas turbine 9% smaller doesn’t change its specific fuel consumption (TSFC). The issue is smaller gas turbines run into a problem of increased relative tip clearances for compressors and turbines. The losses due to these clearances increase with a reduction in the size of the gas turbine (the axial stage dimensions get smaller and this makes the fit more tricky. This is why small gas turbines use less efficient radial stages for the smallest diameter compressor stages at the end of the high-pressure compressor). We would have a gas turbine with, at best, the same TSFC as the original core.

Any gain in efficiency comes from assistance with gas turbine transients from running the motor torque back trough the gearbox and using the motor as an engine starter. But these effects can’t compensate for the 9% losses caused by the added constant weight of the battery. Once again we have a Hybrid that increases the energy consumption compared to the aircraft it shall replace.

There is a deeper discussion if the precharge energy from the electric grid is generated more efficiently than our core power (it isn’t today) but we don’t have to go to any level of sophistication in this discussion. The evidence of fundamental efficiency problems with anything battery driven is too obvious.

Every time we try to go the route of increasing the efficiency of our airliners with energy from a battery, the weight of the battery kills the idea.

It shouldn’t replace or assist the power of the gas turbine at takeoff, climb or cruise, however. Because then our battery size increases, and everything capsizes.

So we can conclude;

This thesis remains until our certifiable battery systems have at least a magnitude of improvement in their energy density.

37 Comments on “Bjorn’s Corner: Why e in ePlane shall stand for environment, Part 14. Parallel Hybrid.”