18 December 2015, © Leeham Co:Part of the discussion following last week’s article around quad or twin engine airliner designs was about engine efficiency and specifically around the engine’s thermal efficiency as a function of Pressure Ratio, PR.

I have previously written about turbofan efficiency in a Corner. The article was focused around propulsive efficiency. Now we will have a look at the other part of overall engine efficiency, the thermal efficiency or the efficiency of the core.

In our Fundamentals of Aircraft performance Part 2 we covered the basics of engine efficiency. Here a short recap:

The low fuel consumption from modern turbofans comes from a high efficiency. This can be divided in the efficiency to generate shaft horse power to drive the fan from the stored energy in the fuel, thermal efficiency, and the engine’s efficiency to transfer that horse power to effective thrust driving the aircraft forward, propulsive efficiency. Thermal efficiency comes from burning the fuel under very high pressure (compression ratio in a car, pressure ratio in turbofans) and turbines that are effective in converting the gas energy into shaft energy. Propulsive efficiency comes from moving a large air mass with low overspeed, the lower the overspeed the better.

I then covered some of the fundamentals of propulsive efficiency in the previous Corner: how a low fan pressure ratio gives a low over-speed of air and that this in turn requires a High ByPass Ratio (BPR) fan to regain thrust lost when the air travels slower out the back of the engine.

Now to the question: Does a higher PR increase the thermal efficiency of the engine (everything else being equal)? The short answer is Yes.

The longer answer is that this depends on several other factors as well. A higher PR (caused by spinning the engine faster) can actually decrease the thermal efficiency if it increases the mismatch in the engine of component efficiencies and is past the optimum pressure ratio for the turbine entry temperature used, Figure 1. 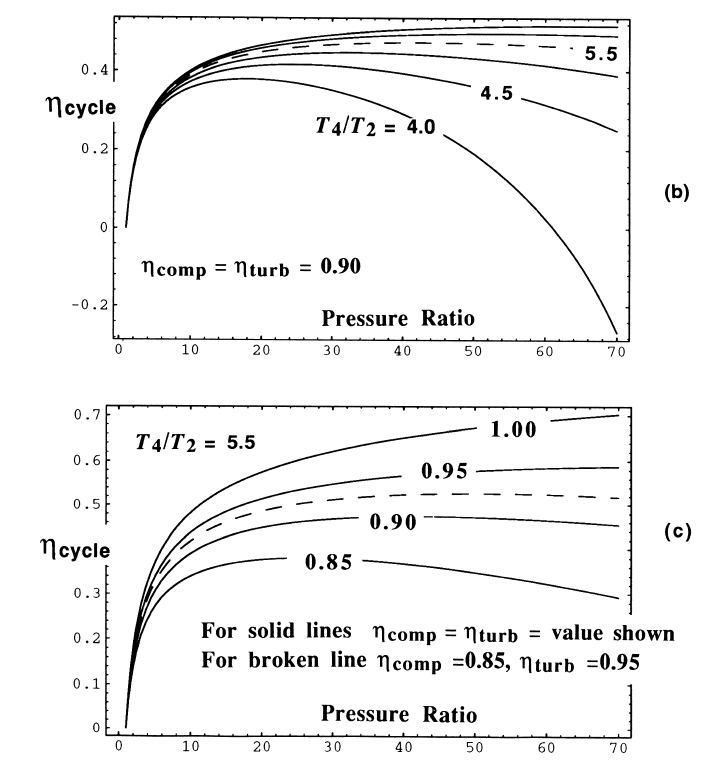 We can see that there is no point in going over a PR of 40 as we then lose efficiency. For older engines which has lower turbine entry temps (has to do with material technology and cooling sophistication) and less efficient compressor and turbine designs (no 3D fluid dynamic design tools) the optimal pressure ratio is to find more towards 30.

It shall be pointed out that the optimum pressure ratio is sought for cruise. For take-off and climb, a pressure ratio on the high side of the curves is OK, as the cruise is the phase which determines the fuel efficiency of a longer range aircraft. We can also understand why short range engines can be optimized with slightly lower cruise PR. The climb is a significant part of the overall efficiency and the whole design point is moved a bit to lower PR (everything else being equal).

The above assumes that the efficiency of the compressors and turbines are constant over the RPM range of interest. In a real engine this is not the case. A compressor/turbine designer can optimize the efficiency over a certain range of operation but then its efficiency falls off either side of this peek. This means the curves are more peaky in real life. Within margin the designer can place this peek within the RPM range. This is the adaptation of the engine to the aircraft and its operational profile; the tuning of the SFC bucket (the area of the RPM and flight conditions where the engine has its lowest SFC).

To summarize: The engine designer has for a certain generation of engines given T4 levels and compressor/turbine efficiencies that can be achieved. He then combines these with an adapted pressure range in the engine to get an overall optimum for fuel efficiency but also reliability (a higher PR increases the temperature at the end of the compressor to critical levels for the materials one wants to use). As different aircraft have different operational profiles, engines need to be adapted to the aircraft they are deployed on.