Emissions of a Hydrogen aircraft

In Part 9 of the series, we wrote the emission from a hydrogen-fueled Turbofan or Turboprop take care of the CO2 problem (no CO2 emissions), it lowers NOx emissions and increases the emission of water, H2O, into the atmosphere.

Figure 2 gives a more detailed view of the emissions from a carbon fueled and hydrogen-fueled airliner. 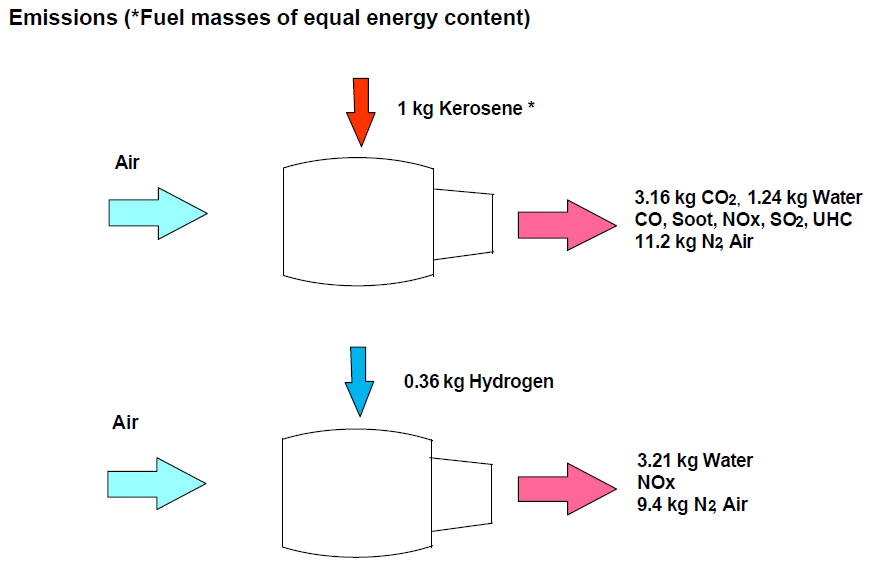 Today’s airliner that burns 1 kg of jet fuel emits 3.16kg of CO2, 1.24kg H20, Carbon Monoxide, Soot, Sulphuric Acid, 11.2kg of Nitrogen and air. This compares with no CO2, 2.6 times more water, one fifth the amount of NOx, and 9.4kg Nitrogen and air from a hydrogen-fueled engine (both burn the same amount of energy, producing the same thrust). A hydrogen-based airliner is a clear improvement in terms of emissions.

It’s rather contrails (ice crystals that form from water vapor condensation on nuclei in the turbofan exhaust) that are contributing to an increase in the greenhouse effect. Though hydrogen-fueled engines put out more water vapor, the ice crystals formed when the conditions create contrails are larger. This changes the effects of the contrails so they are thinner and contribute less to the greenhouse effect than the same amount of water vapor from a carbon fueled engine.

The combined effect of the increase in water vapor and the formation of contrails, considering the different types of ice crystals formed, is a reduction in the greenhouse effect from hydrogen-fueled airliners by around 20%.

I have taken these results from both the Airbus Cryoplane study (from 2000) and the EU’s study, released in May 2020. Both documents say these results are according to the best knowledge but this subject needs more research.

To summarize these and other studies, hydrogen-fueled airliners, as Airbus’ ZEROe concepts in Figure 2, would:

The above assumes the same efficiency aircraft and engines, transporting the same amount of passengers the same distance, fueled by Jet A1 kerosene alternatively hydrogen.

This assumes both aircraft fly the same trajectory, meaning the hydrogen airliner is not adapting it’s mission profile to avoid contrail creation (for instance, change flight level to one that does not produce contrails in areas where conditions predict contrail creation).

74 Comments on “Bjorn’s Corner: The challenges of Hydrogen. Part 11. Emissions”