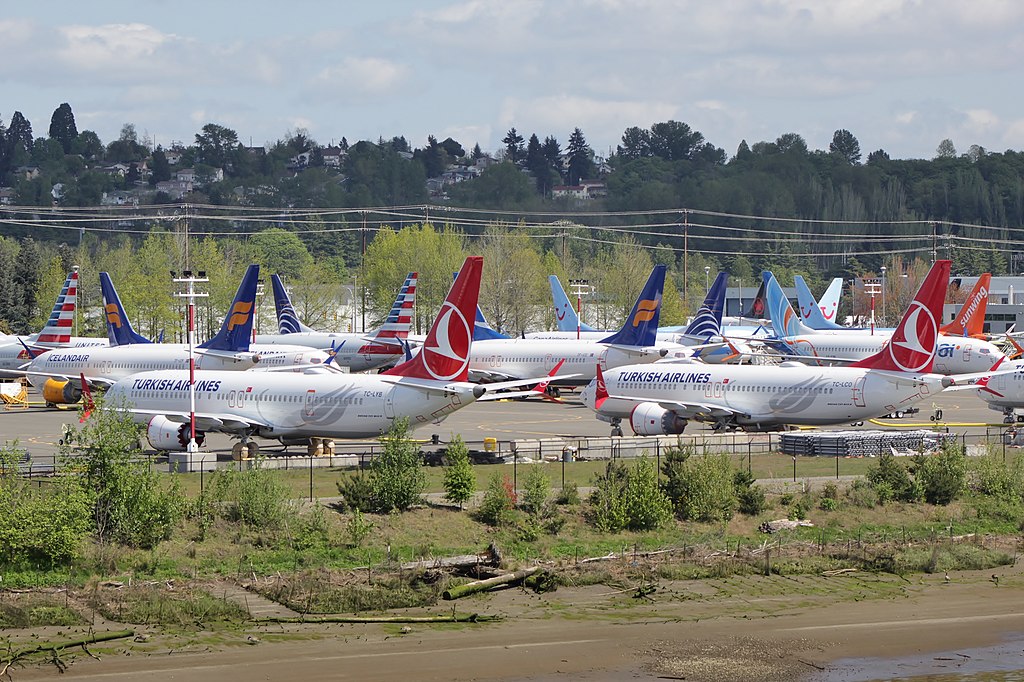 Boeing delivered 387 737 MAX 8 and 9 to customers before FAA’s grounding. Seven of these were not flown to its customers. The remaining 380 are stored around the world, typically at airfields suitable for storage with a dry climate. Examples are Victorville, CA (Southwest MAX storage, at the border of the Mojave desert), Tulsa, Oklahoma (American Airlines’ MAX storage), and Goodyear Arizona (United’s MAX store).

Boeing has produced 450 additional MAX 8 and 9 stored at Moses Lake, WA, Victorville, San Antonio, TX, and its airfields in the Seattle area.

These aircraft have been in storage for up to 20 months now. During this time, the airlines have jogged the aircraft systems twice a month, with Boeing’s service representatives present every four weeks.

Storing aircraft for months or years is nothing new. The winter season has reduced demand for aircraft, and many airlines store part of their fleet over the winters. Conserving aircraft and de-conserving them is an established routine.

Yet the MAX return to service is de-conservation of another scale. Boeing has practiced the de-conservation steps 400 times during the grounding when supporting ferry flights. Boeing will also have special MAX service representatives teams that support airlines that take aircraft into operations with onsite support for the first months.

De-conservation, rework, and checks before operations

The rework of a 737 MAX wiring for the trim systems takes about 400 working hours. Special teams are set up at facilities around the world to perform this work.

After the rework of the wiring the aircraft de-conservation is finished, engines are run to burn off conservation oil, and systems are brought back to serviceable levels. For the pitot system, this will often involve cleaning as insects can have clogged the pitot lines.

Then follows software updates to the Flight Control Computers and the Cockpit Display Systems. Engine control runs are performed where key engine data is verified. Then the flight control system is checked, and all systems are tested with the Built-In-Test (BITE).

After cleaning and preparation for flight, the aircraft are test flown. The proper operation of all systems is verified. The airplane is flown to a test protocol, visiting the different corners of the flight envelope. It’s verified the aircraft performs to specification.

The above takes about 10 days once the rewiring is done. When declared ready for delivery (new aircraft) or re-entry to service (delivered aircraft) the operations acceptance starts. For new aircraft is contains:

The delivery procedure takes six to seven days. This phase is shorter for delivered aircraft as there is no airworthiness inspection by the FAA, just a check that the de-storing procedure is correctly done.

It will take years

Boeing expects to deliver about half of the 450 undelivered aircraft during 2021 and the other half during 2022. Some of the undelivered aircraft are White-tails. The original airline customer doesn’t exist anymore and cannot/will not accept the aircraft. This means remarketing and possible configuration change before the plane is back in the air.

We can expect it will take until early 2023 for the complete fleet of grounded 737 MAX to fly again.

45 Comments on “Restoring operations of the 737 MAX”