Will a gas turbine APU burning H2 be the best choice for auxiliary power as well? 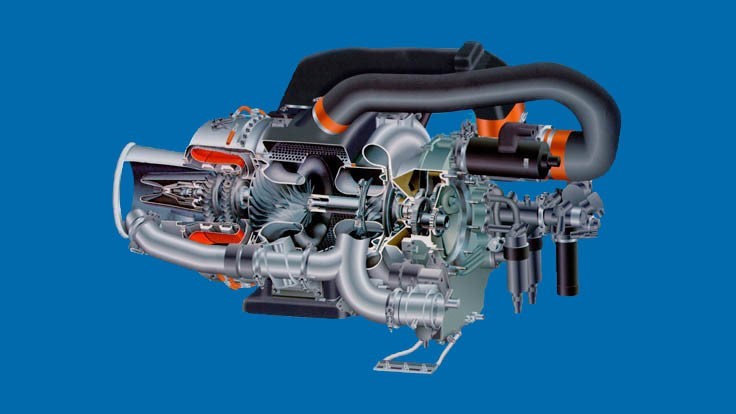 We found the fuel cell as a shaft power source for driving a fan/propfan/propeller ran into complications both for a 165 seater turbofan aircraft and the 80 seater turboprop airliner. The output from a fuel cell is electric power, and we need shaft power.

You must add electric motors, and these must be fed with the correct alternating current, forcing conversion electronics at the fuel cell and motors. It ended up three times heavier than a hydrogen-burning gas turbine core without offering higher efficiency.

APUs also deliver bleed air for engine start and air to the ECS (Environmental Control System = aircraft air conditioning) at the gate. Bleed air is an inefficient form of power, bleed from the engine’s compressors during flight and the APU during stops. It’s too hot coming from the engines to distribute as-is and passes a pre-cooler in the pylons, ejecting about one-third of the energy to bypass air to get the air temperature down to around 200°C. Thus a third of the engine bleed air energy goes to waste before it’s distributed in the aircraft.

An APU also drives an electro-hydraulic pump through its generator to power brakes during towing and any movables needing maneuvering for service.

A modern aircraft design would change the architecture of the aircraft to a “more electric design”. Here the inefficient bleed air is replaced with electric power, and hydraulics is made local to where it’s needed (using electro-hydrostatic actuators). Such a design can reap the benefits of fuel cells replacing the APU.

In addition, the engine-based auxiliary gearbox can be skipped and replaced with starter-generators in the engines as described here. The ECS would use electric compressors and the wings electric de-icing like on the Boeing 787. Control surfaces that need hydraulic power use electric-powered self-contained actuators, as do the brakes.

We now have a design where a noisy and inefficient APU (about half the efficiency of an engine core) is replaced with quiet and efficient fuel cells. The APU sits at the aircraft’s tail for sound reasons. It’s very noisy and shall be placed as for from boarding and deplaning passengers as possible.

A fuel cell is quiet and can be placed where the primary consumers are, in the wing root area where the ESC, main landing gear, slat, flaps, spoilers, and the wings’ de-icing come together. This moves weights forward in the aircraft, which is a bonus for a tail tank architecture hydrogen aircraft.

Figure 2 shows a ballpark power and weight table for our 165 seater. 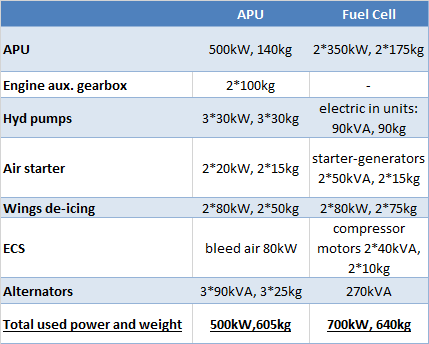 It’s not a detailed comparison as the figures are first-order approximations (there are a lot of “what counts to what” issues at play).

The purpose is not to make an exact comparison; it’s to check if we have a gross imbalance between today’s technology, the carbon or hydrogen-fueled APU, and an alternative based on fuel cells. In this spirit, we put the piping weight of air, hydraulics, and electrics for the APU alternative equal to a more elaborate electric distribution system for the fuel cell alternative.

We can see the fuel cell alternative is a bit heavier, but it’s also about twice as efficient as an APU. APUs are designed to be small and light, rather than efficient. With a dual fuel cell setup, we have enough redundancy to let the fuel cells be sole power to the aircraft’s systems, contributing to an efficient architecture, as we can then replace the engine auxiliary gearboxes with low power starter-generators. The efficiency is increased as fuel cells produce H20 and O2 that we can use as onboard water and emergency oxygen.

In all, the fuel cell is an attractive alternative for the auxiliary power function of a future hydrogen airliner.

← Airbus 2020, prudent navigation of a challenging environment
Differentiation in the marketplace and the time for the open rotor →