March 26, 2021, ©. Leeham News: This week, we look at combining the propulsion and hydrogen tank in an integrated nacelle as Airbus proposes in Figure 1.

Airbus calls it its “pod” solution. What are the advantages, and what challenges does it present? 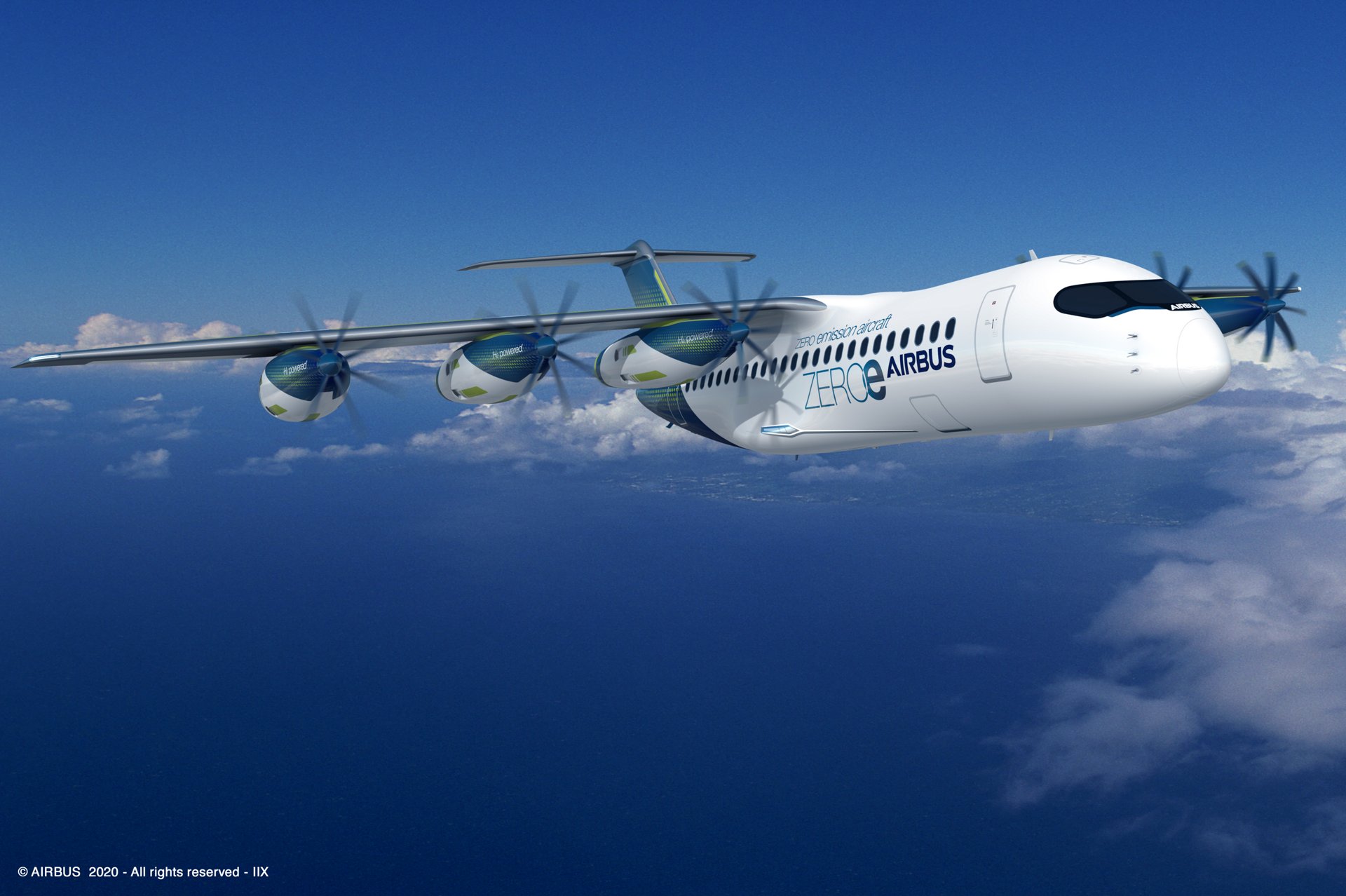 Combine hydrogen tank and propulsion in a pod

Airbus describes its pod solution as a serial fuel cell solution, where the pod contains:

Does it work? Can a typical turboprop use the pods as a propulsion solution?

Let’s do a reality check of the type we did before. The turboprop is described as a sub-100 seater with six pods.

We use the propulsion values from an ATR 72-600 80 seater to get our base data for the check. The gas turbine engines develop 4MW for takeoff, and the fuel needed on a maximum range route of 800nm is 2,000kg with 500kg reserves, occupying a volume of 3.2m3.

For a carbon fuel to LH2 transfer, we have 2,500kg fuel with an assumed 500kg weight for tank sealing, pumps, valves, and tubes versus 850kg LH2 and 2,400kg tanks. As these are in the pods, their pumps/valves/tubes can be set at 250kg. This includes a filling tube to all the pods.

The carbon fuel total is 3t versus an LH2 total of 3.5t. Weight-wise we are in an acceptable range.

Volume-wise we have 3.2m3 versus 12.6m3 plus the tank walls space, say 15m3 in total. It’s a five times increase, but it can be handled. The nacelles of a DH 8-400 are around 8m3 each, and while large, they don’t cause problems for the aircraft (they house the main landing gear, thus the size).

A six pod, four pod, or even two pod solution is doable from an LH2 tank aspect.

It’s more problematic when we check the proposed fuel cell propulsion. Let’s first conclude, if we convert the Pratt&Whitney PW127 turboprop engines to hydrogen, it works. The PW127s weigh 500kg each and occupy the forward part of a gas turbine + LH2 tank pod.

The fuel cell solution runs into the same problem we saw last time we calculated a turboprop using a serial fuel cell concept. The fuel cells for the 4MW propulsion weigh 2,100kg, the motors 300kg, and the inverters 200kg. We have a total of 2.6t instead of 1t.

An added weight of 1.6t for the propulsion adds to the 500kg for the LH2 tankage. A weight increase of 2.1t instead of 0.5t is problematic for an aircraft type with an empty weight in the 13 tonnes bracket. From a volume perspective, it works. The fuel cells with motors, inverters, etc., occupy around 1m3.

The Airbus pod concept has several attractions (Airbus has applied for a patent for the pod). It stores the LH2 close to the propulsive motors, and it offers the LH2 tanks a round shape.

Placing the weight of the LH2 with tanks on the wings where the aerodynamic lift attacks is advantageous; it lowers the wing’s bending moment at the wing roots.

The aerodynamic drag increase of an enlarged engine nacelle is not dramatic. As long as the speeds are far from compressive flow (and they are for a turboprop), the air curves around objects with ease (the idea that frontal area is a significant drag cause is false, it’s not as long as the speed is below M0.6). The dominant drag increase comes from the increase in wetted area from the pods, not their shape (air friction drag is the dominant drag of an airliner).

← The A350, Part 11: Can a standard A350-1000 fly the project Sunrise route?
Airbus trails Boeing in US in-service airplanes but leads with backlog →