March 4, 2022, ©. Leeham News: This is a summary of the article Part 9P. Parallel Hybrid, the Deeper Discussion.

We look into the Pratt & Whitney, Collins Aerospace, and De Havilland project to create a Parallel Hybrid propulsion alternative for the Dash 8 turboprops.

The project “targets a 30% reduction in fuel burn and CO2 emissions, compared to a modern regional turboprop airliner” according to the Pratt & Whitney press release. 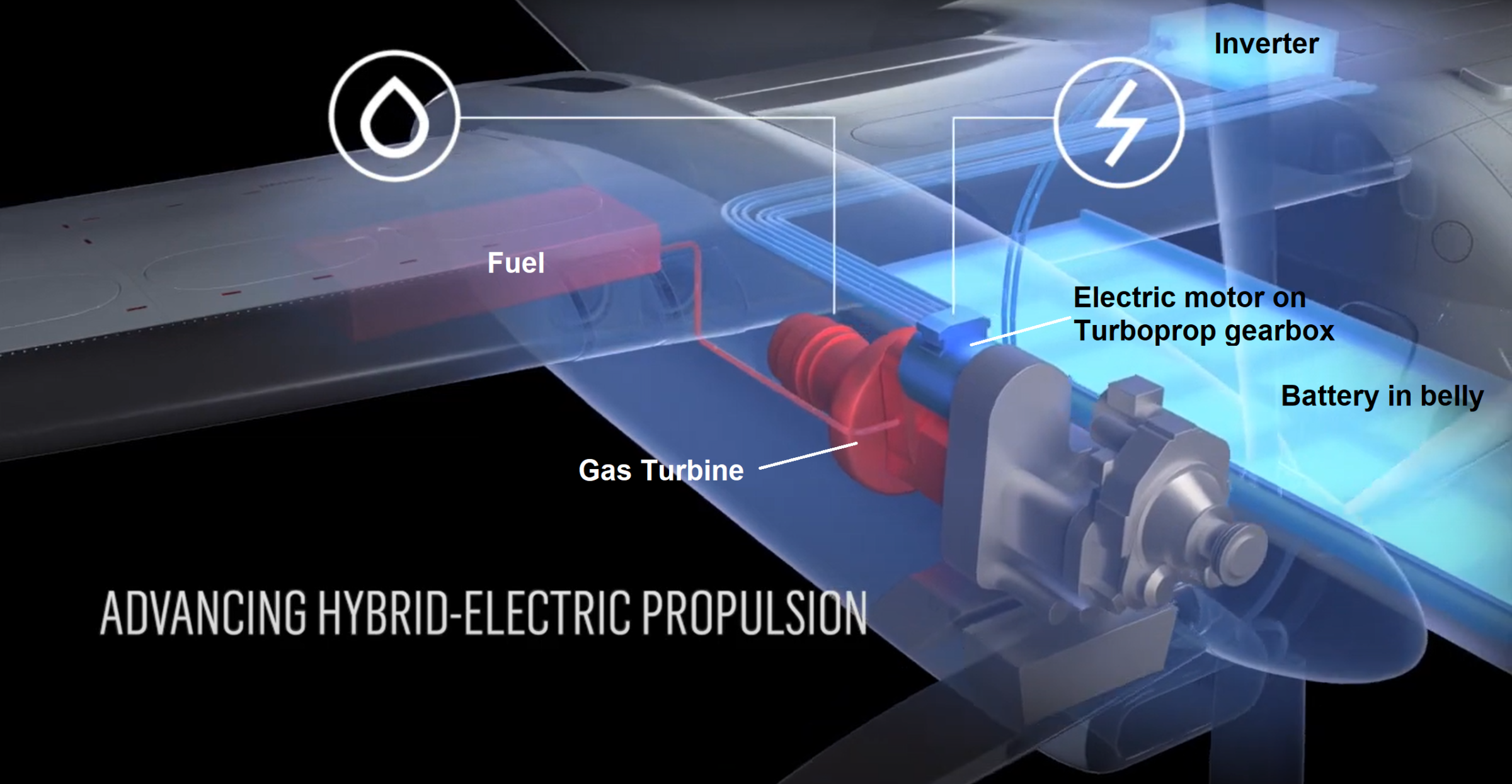 The Deeper Discussion article looks at the consequences of installing the different components seen in Figure 1 in the different De Havilland Canada Dash 8 models -400, -300, and -200.

A Parallel Hybrid architecture complements the turboprop gas turbine with an electric motor that adds power to the propeller gearbox for takeoff and climb (Figure 2). The cruise, descent, and landing are made on the gas turbine.

Figure 2. The block schematic for our Parallel Hybrid compared with other configurations. Source: Leeham Co.

The result of the analysis is sobering. The Hybrid propulsion system with its battery weighs between two to four times as much as the turboprop system it shall replace. The consequences are significant losses of payload (the -400 goes from an 82 seater to a 42 seater), range, and operational flexibility.

The gains in fuel consumption from the electric boost of the takeoff and climb phase from Grid electricity are lost if we need to recharge the batteries before the approach at the destination (we need to do this, otherwise the gas turbines must be sized for the full Go Around and Climb power).

As the recharging is done at the efficiency of the gas turbine with losses in the reversed electric motor (now functioning as a generator) and the following inverter, the recharging cost us within 22% of the fuel we saved in the first phase of the flight. Our total save of fuel, and thus emissions, are below five percent for the flight.

For the energy costs, we have a loss. When we add the cost of Grid electricity to the cost of fuel, all gains from the Takeoff and Climb boost are gone.

In the end, we have a heavier, more complex system, with significantly increased operating costs. The higher energy costs are paired with higher maintenance costs as the propulsion system now contains more parts and the batteries have to be replaced twice a year.

The results are: emissions gains of less than five percent, increased operating costs for energy and maintenance, and payload capacity reduced by over 50% (DH8-400).

Hybrids works for cars as these are very inefficient and waste the energy invested in the forward speed at the next stoplight. Hybrids can recover some of the brake energy and, therefore, are more efficient than standard cars in stop-and-go traffic.

For air vehicles, hybrids are, in general, too heavy and complex. When the requirements for flight safety and the diversion to an alternate are added, their weaknesses get exposed. Batteries filled from the Grid have to be filled up in flight, and this kills any gains with the onboarding of Grid energy before taxi.