May 20, 2022, ©. Leeham News: Last week, we looked at the principal parts of a Fuel Cell-based propulsion system. We need a fuel cell that converts hydrogen to electric power and then an inverter and electric motor that drives the fan, Figure 1.

The fuel cell system is the complicated and heavy part of this setup. Let’s look at how we size such a system. 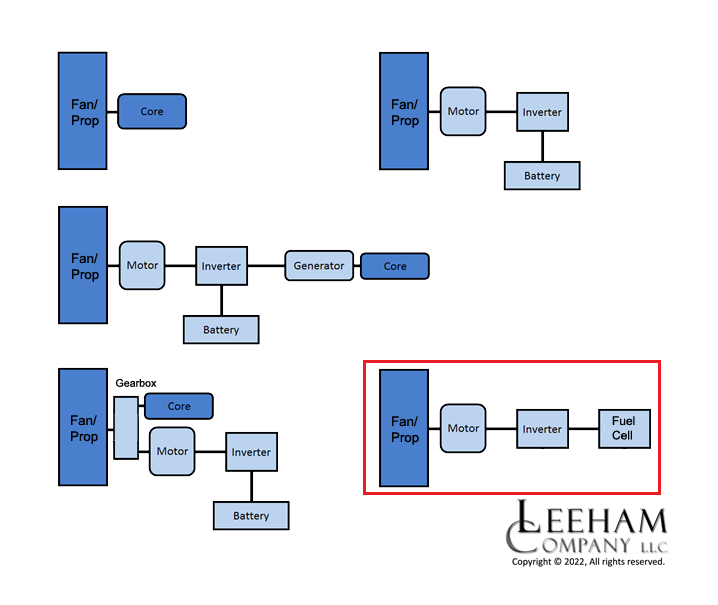 From our aircraft performance specification, we know what thrust values our propulsion system shall deliver at different phases of flight. We have three important power ratings:

But as we will see, the heaviest and bulkiest part of a fuel cell system is the heat management part, Figure 2. (The heat management is the blue part and parts of the red components). It will also create drag with its large ram-air heat exchangers. 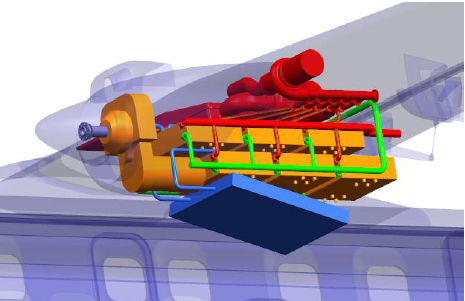 Here we must be wise so that the system can handle 2*2MW=4MW during 5 minutes, but not longer. We can design the system so that its internal heat capacity handles this transient heat level. In the case of one engine being inoperative, this becomes 1*2 MW for 10 minutes which shall be no problem.

For the climb, maximum continuous, and cruise power levels, we must have a fuel cell system that is in balance heat-wise. It means the system shall be able to handle 2*1.4MW (which is more than 1*2 MW continuous power) during the climb, which can last up to half an hour.

The above time limits for takeoff help the thermal management system, as the lowest cooling for the heat exchangers are the low speed of takeoff (around 100kts), and the highest temperatures with reduced air density, up to 40°C at 6,000ft (the typical hot and high airport). It results in the lowest cooling from the ram air through the heat exchangers.

At higher speed (typical climb speed for a 70 seater turboprop is 170kts) and the lower air temperatures at higher flight levels, the cooling situation is considerably improved (Standard temperature at 8,000ft is 0°C and at FL250 it’s -35°C).

So the trick to a fuel cell system that is as light as possible and which has the lowest cooling drag is to size it for the long-term power levels and to rely on its internal heat capacity to handle transients. We also need to use the cool sink of the liquid hydrogen to the maximum.

We size a fuel cell system based on the above mission values in the next Corner.

← Impact of Russian Airspace Closure on the World’s longest flight
Pontifications: Airbus delays for A220 tied to supply chain issues →