June 27, 2022, © Leeham News: Boeing dominated the jet freighter market from the dawn of the jet age. It aims to keep its dominance.

But for the first time since the collapse of McDonnell Douglas in 1997, Boeing is being credibly challenged by Airbus and P2F conversions. Airbus is selling the A350F. EFW, which is a joint venture between Airbus and ST Aerospace, and IAI Bedek offer freighter conversions for the A330. The A350F is Airbus’ first credible challenge to Boeing’s dominance in the widebody freighter section. (The A300-600RF was a niche aircraft. A310 combis and the A330-200F were unsuccessful.)

EFW, Precision Conversions, and nominally at least two others offer conversions for the A320/321. There are more than 100 A330 P2F and at least five dozen A320/321 P2F orders, marking the first challenge to Boeing’s dominance in narrowbody freighters converted by the aftermarket.

Boeing has been testing the market for months on whether to launch a conversion program for the 777-300ER. Boeing Global Services announced in 2018 at the Farnborough Air Show that it was launching a -300ER P2F program, but never followed through. If Boeing proceeds this time, it faces competition from IAI Bedek, Mammoth Freighters, and Kansas Modification Center, each of which already has firm orders for about 65 conversions.

Boeing offered new-build freighters of combis for the 707, 727, 737, 747, 757, 767, and 777. A freighter version for the 777X was launched this year. The only new airplane program it doesn’t offer a freighter for is the 787. However, when designing this airplane, Boeing “protected” the ability to offer a freighter version. Systems were routed around so that a forward cargo door could be designed into the airplane at a future date. Boeing is studying the possibility. If Boeing launches a New Midmarket Airplane (NMA), which remains a possibility, the prospect of an NMA freighter is high.

Brian Hermesmeyer, Senior Director, Freighter Customer Leader, acknowledged during Boeing’s briefing in advance of the Farnborough Air Show next month that studies for the 787F and NMA-F are “natural conclusions.” A driving factor is new requirements to lower noise and emissions means the 767F can’t be produced from 2028 unless exempted. The latter is unlikely under a Democratic Administration, except as a bridge aircraft to a new solution.

If a Republican takes over the White House, an exemption is likely. But the next presidential election is in November 2024 and Boeing most likely must make a decision about a new airplane program in 2023 or 2024.

An NMA-F may be an important factor in whether to proceed with the NMA. According to the database ch-aviation, there are 733 757Fs and 767Fs in service for which an NMA-F could be a replacement. (Another 62 767Fs are in Boeing’s backlog.) The 787 is too much airplane to replace the 757s and may be too much for a portion of the 767F replacement. The NMA-F has less payload than the 767F, by LNA’s analysis, but for operators like UPS and FedEx, volume matters more than volume. (Package carrier DHL is acquiring A330P2Fs and 777P2Fs.)

Boeing and Boeing airplanes also dominate the aftermarket conversions. The company offers Boeing Converted Freighters (BCF) for the 737 and 767. IAI offers a P2F conversion program for the 767. In 2018, Stan Deal—then the CEO of Boeing Global Services—said BGS would offer a BCF for the 777-300ER. However, the plan never progressed to production. 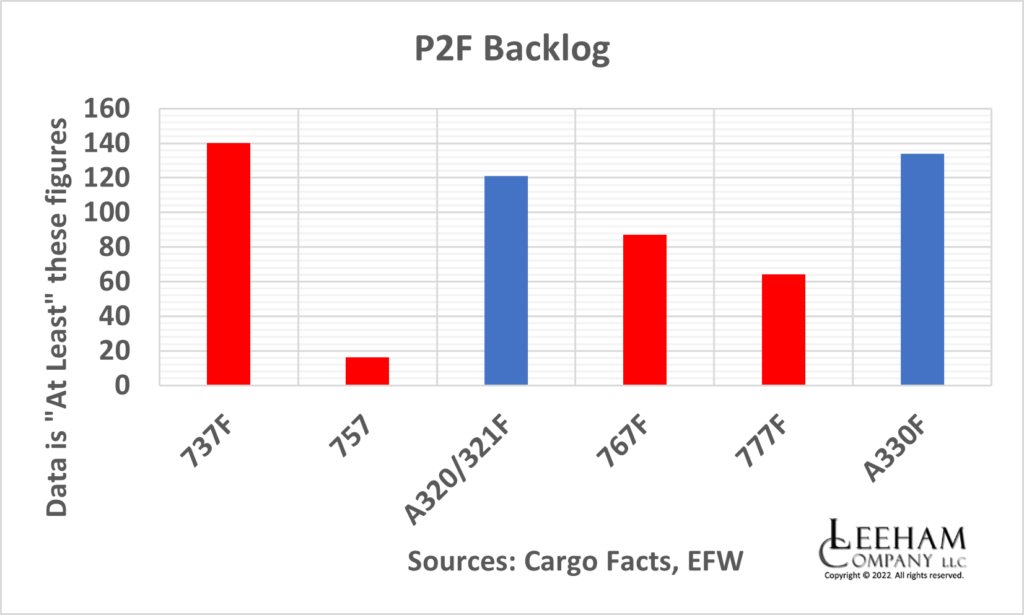 Hermesmeyer, at the air show briefing, said Boeing couldn’t close the business case then or more recently. “The Triple 7 freighter conversion is a very challenging business case for us,” he said. “That’s why we haven’t seen a Triple 7 300ER conversion. What we have done is provide data licenses to three companies. We continue to explore opportunities to do a BCF-style program of some kind, including potential industry collaborations. That’s something we continue to study, but for the time being, the licensees are going to fulfill that role.”

Nevertheless, in recent months Boeing has been testing the market on whether to offer the BCF -300ER. If Boeing proceeds, it will be the fourth to market, after IAI, Mammoth, and Kansas Mod. (Eastern Airlines says it is developing a Preighter version of the 777, but few in the industry give this credibility either for the execution or competitiveness.)

On the narrowbody front, there are several conversion houses in addition to Boeing’s own BCF program. Throughout the jet age, Boeing platforms (as well as those based on McDonnell Douglas aircraft) were active. Every 7-Series jet except the 787 was converted by third-party houses. Boeing proudly points to its dominance.

EFW, the Airbus JV, offered conversions of the A300 and for many years the A330. The former was only modestly successful and until recently, the 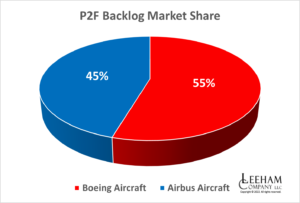 latter lagged. But with cheap A330s in the market, especially following the wholesale storing in the wake of the COVID pandemic, the A330 P2F program has taken off. EFW now has orders for more than 100 conversions. It also has more than 100 orders for conversions of the A320/321.

There are far fewer companies performing conversions on Airbus aircraft than on Boeing. One reason: the fly-by-wire design of Airbus is trickier to work around. Another is that Airbus didn’t have the foresight to “protect” the fuselage from these fly-by-wire systems, requiring rerouting. Obviously, this at long last has been overcome. One other issue (among several): the A320 family’s slightly wider fuselage than the Boeing narrowbodies makes for an oddity when it comes to containers.

Nevertheless, just as Airbus finally designed and launched a credible competitor in the A350 to Boeing’s near-exclusivity for the widebody sector, Airbus (EFW) and others are beginning to encroach on Boeing’s monopoly in the single-aisle sector. The A330 failed as a new-build freighter (the -200 was chosen, rather than the more desirable -300). But as an aftermarket conversion, the A330 (principally the -300) is making a major inroad as well.

← Exclusive: No change in Scope Clause in new United pilot contract that would have allowed E175-E2
Boeing’s ecoDemonstrator latest in 10 year effort →