We wonder what took Boeing so long to make this obvious point: France is protectionist in its defense purchases and should quit complaining about the KC-X competition in the US. See this Reuters story.

END_OF_DOCUMENT_TOKEN_TO_BE_REPLACED

Outlook for Airbus, Boeing in 2010

2009 has faded into history and 2010 is here. Last year wasn’t kind to Airbus or Boeing—though it was worse for the latter than the former. How will this year be?

We’ll get right into how we see things lining up for the two largest airframe OEMs for this year.

END_OF_DOCUMENT_TOKEN_TO_BE_REPLACED

Bill Barksdale, Boeing KC-7A7 spokesman, emailed us with a response to this column. We have posted his note in the Comments section below.

The USAF used criteria in the current Draft RFP for the KC-X competition that had been rejected by the Government Accountability Office’s review of the Boeing protest last year, an analysis by prepared by EADS North America and Northrop Grumman asserts.

This unfairly tilts the current DRFP toward the Boeing KC-767 and is the basis Northrop why said it will not submit a bid unless major changes are made with the Final RFP.

END_OF_DOCUMENT_TOKEN_TO_BE_REPLACED

Posted on December 7, 2009 by Scott Hamilton

Bloomberg quotes the CEO of Boeing Integrated Defense Systems as saying the USAF Draft RFP for the KC-X competition favors the smaller 767.

“It’s important for us to allow the customer to finalize the requirement, but if you look at the current request for proposals it would push us toward a 767-based plane,” Muilenburg said today at a conference sponsored by Credit Suisse Group AG in New York.
END_OF_DOCUMENT_TOKEN_TO_BE_REPLACED

Posted on December 3, 2009 by Scott Hamilton

Airbus has said it before but it is worth reminding people that if Northrop Grumman follows through on its statement that it will not bid the KC-30 in the KC-X competition unless significant changes are made to the Draft Request for Proposals (DRFP), Airbus won’t build an A330-200F assembly plant on its own in Mobile (AL).

We checked with Airbus immediately after Northrop’s announcement and a spokesman confirmed that the company’s position has not changed: there is no “business case” for an A330F final assembly line (FAL) without the KC-30 tanker contract.

END_OF_DOCUMENT_TOKEN_TO_BE_REPLACED

Posted on December 3, 2009 by Scott Hamilton

Northrop says no bid on tanker unless…

Update, December 2, 3:00 pm: DOD Buzz reports that Rep. John Murtha, a powerful House member, says there has to be competition for the KC-X and doesn’t rule out Congress stepping in.

This is something we forgot to mention in our Update below. We fully expect an effort on the part of some Members of Congress to renew the effort for a split buy. As we have written many times before, we can think of many strategic reasons this makes sense, let alone the political solution. But this also only makes sense if the procurement is doubled from the 12-18 per year proposed by DOD to 24-36 a year. We also believe the KC-777 is the best replacement for the aging KC-10.

There is enough strategic need to go around for everyone. That this continues to be a political football should be an embarrassment to all concerned.

The prospect that Northrop Grumman won’t submit a bid unless the Final RFP is changed to allow for the different sizes between the KC-30 and the KC-767 is very similar to what happened with the 2006 competition.

The USAF then initially did not plan an “extra credit” for larger capabilities exceeding the minimum requirements of the airplane. Northrop threatened to withdraw from that competition unless the FRFP allowed for extra credit–and prevailed.

END_OF_DOCUMENT_TOKEN_TO_BE_REPLACED

Posted on December 1, 2009 by Scott Hamilton

EADS released these photos of the KC-30 MRTT refueling fighters. The company previously released photos of refueling as viewed through the 3D controller’s panel video screen. The MRTT has now “passed gas” (as we like to say, much to the consternation of the more straight-laced crowd) through the new flying boom from the MRTT. 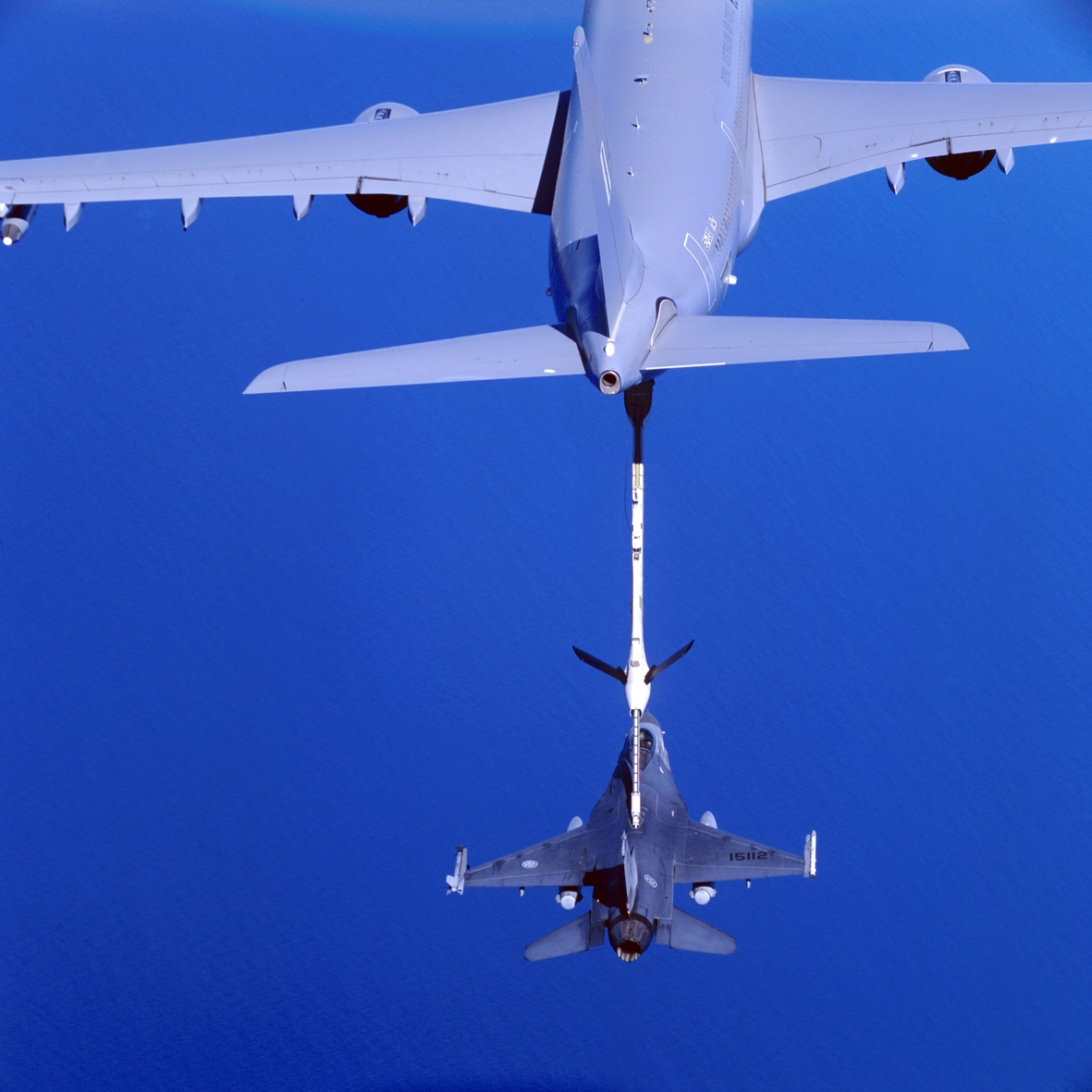 These delayed tests have been the target of much criticism from Boeing supporters, who pointed out that EADS has been delayed in meeting milestones for the Royal Australian Air Force deliveries, which are now 18 months late. About six months of the delay was due to customer change-order requests. 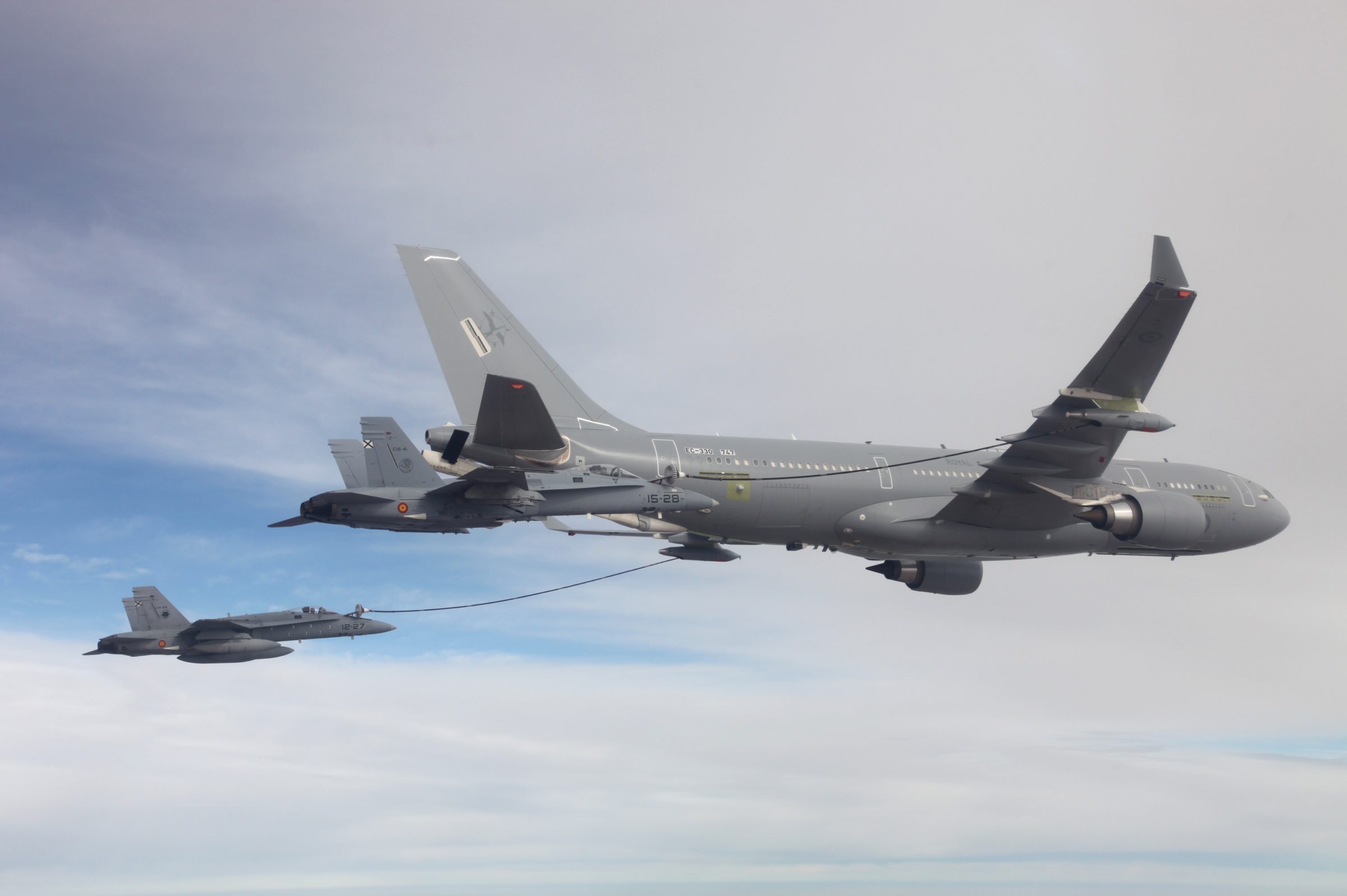 Boeing’s proposed KC-767 refueling tanker will benefit from plans to establish a surge production line for the 787 program.

The connection is not obvious, for Boeing didn’t suggest as much when it announced that Charleston (SC) will be the location for the second 787 production line. As Line 2 is being established, Boeing will put a “surge” 787 line in Everett (WA), where Line 1 is located. The surge line will be in the forward bay where the 767 line is, requiring relocating the 767 line to the aft part of the bay.

END_OF_DOCUMENT_TOKEN_TO_BE_REPLACED

Inside Defense, a subscription-only publication, today reported that a former defense procurement official believes the current KC-X tanker Draft RFP may violate the law. Here is what Inside Defense sent out in the public domain:

The Pentagon’s solicitation for the KC-X aerial refueling competition is inconsistent with the 2009 Weapon Systems Acquisition Reform Act and may violate the law, according to a former top federal procurement officer.

That critique, by Robert Burton, a former deputy administrator of the Office of Federal Procurement and Defense Department veteran, comes as a powerful lawmaker and a key architect of the recently enacted weapon systems acquisition reform law — Sen. John McCain (R-AZ) — is raising questions about whether the KC-X draft request for proposals, issued on Sept. 25, complies with the new act.

END_OF_DOCUMENT_TOKEN_TO_BE_REPLACED

Update: Defense News just published this article detailing the continuing problems Boeing has with the KC-767 Italian tanker, including the centerline hose-and-drogue problems we previously exclusively revealed in this column.

With Boeing and Northrop Grumman still in the Q&A stage with the USAF in advance of a Final Request for Proposals in the KC-X competition, we predict that Boeing will offer the KC-767 and not the KC-777.

Posted on November 8, 2009 by Scott Hamilton