END_OF_DOCUMENT_TOKEN_TO_BE_REPLACED

US Airways CEO Doug Parker spoke today on the effort to merge with American Airlines and of industry conditions.

This is a running tally of the comments and Q&A.

END_OF_DOCUMENT_TOKEN_TO_BE_REPLACED

Odds and Ends: 737 MAX development cost; another range boost for A330

737 MAX: We did this story last week on the development cost of the Boeing 737 MAX.

Fill ‘er up: Here’s a scary story about a goof in aerial refueling of a Boeing 707-based JSTARS.

END_OF_DOCUMENT_TOKEN_TO_BE_REPLACED

New York magazine has a good article that starts with US Airways 1549 and continues for five URL links discussing a variety of pilot-emergency handlings. It’s a great piece and the starting URL link is here.

Posted on February 3, 2009 by Scott Hamilton

Fortunately we can laugh about this one. 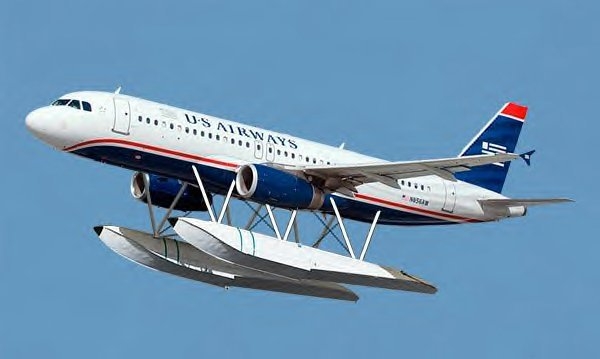 More information continues to emerge over the remarkable saga of US Airways flight 1549. Readers can Google the news stories and get plenty; we linked to New York Times pieces at the end of this column, below the jump. A good resource is Flight International, which always excels at accident reporting.

Here are some more of our thoughts, none of which has made it into the media so far as we know.

This isn’t the first time an airliner was brought down by birds. Way back around 1961-62, an Eastern Airlines Lockheed Electra crashed on take-off from Boston’s Logan Airport after hitting a flock of starlings so thick that all four turbo-prop engines failed. This happened right at lift-off. All aboard were killed, if memory serves correctly.

Did the Airbus flight envelope protection system help US 1549’s pilots control the airplane as it descended to the Hudson River? The system is designed to prevent stalls, and it’s believed the captain properly had a nose-up attitude in order to hit the water with the tail of the plane and minimize impact to the front of the aircraft. The maneuver was tricky to say the least without engine power. Did the computer system help prevent a crash? Update, 8:00 PM PST January 19: The Wall Street Journal, in an article dated January 20 and posted on its website January 19, confirms that the flight envelope system was operating and contributed to the safe landing of the airplane.

Was this a crash, like the media reported? In fact, this was a controlled water landing and, yup, the aircraft was destroyed–but was it a crash in the classic sense of the word? Even the flight attendants described the contact with the water like a “hard landing.”

Speaking of over-wrought hand-wringing, Fox News’ Sean Hannity was worse than usual. This dip claimed the accident was the fault of US Sen. Charles Schumer (D-NY), the environmentalists and liberals because of laws protecting Canadian geese around airports. This one is over the top even for this right-wing wack job.

Speaking of wack jobs, KIRO Radio (Seattle) conservative talk show host Dori Monson had one call into his program as he was doing a superb job interviewing pilots about the US Airways incident. This caller wanted President Bush to invade Canada because the birds thought to have struck the A320 were Canadian geese. Dori, a bit of a wack job himself on occasion, exceled at his coverage and knows the ridiculous when he sees it. He so wanted to talk to this lady, but she hung up before he got to her. (Dori’s screener got her subject matter.)

END_OF_DOCUMENT_TOKEN_TO_BE_REPLACED

US Airways received an award to fly from Philadelphia to China in 2009 and there were wide reports that the company was looking for Airbus A340s to serve as interim lift until the A350 could be delivered beginning in 2014.

Even one official of the company said so at the annual media day today. But in private conversation with CFO Derek Kerr, he told us it ain’t gonna happen. Kerr said he has no interest in the A340 and the airline will use the A330-200, with load restrictions when necessary, to serve the route until the A350 can be delivered.