No plateau on 737NG: Boeing

“There is no plateau in interest on the 737NG,” says Boeing’s Beverly Wyse, VP and GM of the stalwart program.

“Even though there are a lot of challenges in the industry, the growth, particularly in the single aisle market in emerging markets and Low Cost Carriers, continues to give us a lot of confidence the demand is out there. Even with the struggles in Europe, there seems to be a little tension between replacement demand and growth demand. We don’t see any pullback in the demand on the 737 at our current production rates or a weakness in demand as we transition to the MAX.”

Wyse gave this assessment during a briefing to the media in advance of the Farnborough Air Show. The briefings were embargoed until July 5.

“Basically we are full all the way through to the middle of 2016. We do have some capacity left in 2016 and 2017 prior to the introduction of the MAX,” she said. “We do have some NGs out in 2018 but that capacity is filling up. We still have customers coming in for NG and MAX four or five or six years out.”

She predicted there will be a two-three year transition period of NG and MAX overlap, though she prefers two years. Wyse acknowledged that the 737-based BBJ and P-8A Poseidon could further extend production of the NG even if passenger models are discontinued.

Boeing is still about a year away from firm configuration on the MAX.

Boeing contends that the MAX will be more efficient than the Airbu A320neo, mimicking the advantage it claims for the NG over the A320 Current Engine Option (CEO). 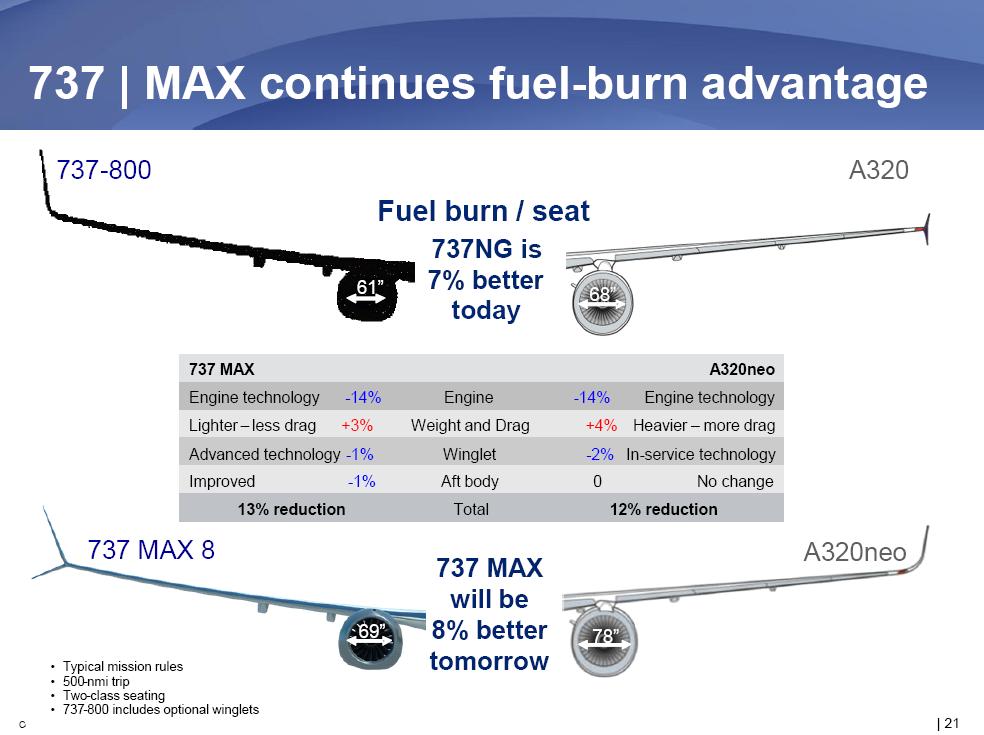 Airbus, of course, disputes this analysis and the assumptions. Furthermore, the Boeing comparison above is against the NEO with the CFM LEAP-1A engine (the MAX will use the LEAP-1B). The A320neo is also equipped with the Pratt & Whitney Geared Turbo Fan, which Airbus’ John Leahy says has a 1.5% better fuel burn than the LEAP-1A and purportedly a much larger advantage over the MAX and the LEAP-1B. 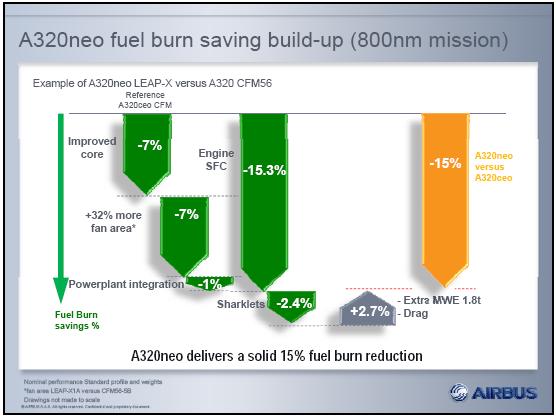 Note that Airbus uses 800nm vs Boeing’s 500nm and a reduced seat count for the 737 (157 vs 162) in the above and below slides. Note other differences between the Airbus and Boeing analyses. Boeing gives its LEAP-1B engine 14% fuel burn improvement (pre-installation), and the same for the LEAP-1A for the A320, despite the -1A having a larger fan. One the other hand, Airbus allows only 10.5% SFC improvement for the Boeing, largely on the basis of the differences in fan diameter and expectation that the -1B’s core won’t be as efficient. 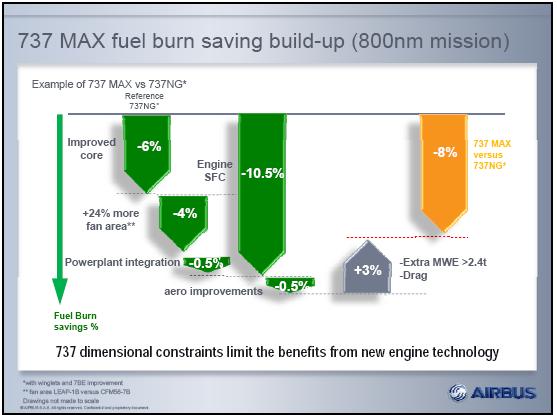 Boeing also credits slightly less gain on the A320 sharklets than does Airbus.

Part of Boeing’s calculation revolves around maintenance costs. Boeing claims the A320 is 23%-27% more costly to maintain and that improvements to the MAX will widen this gap. 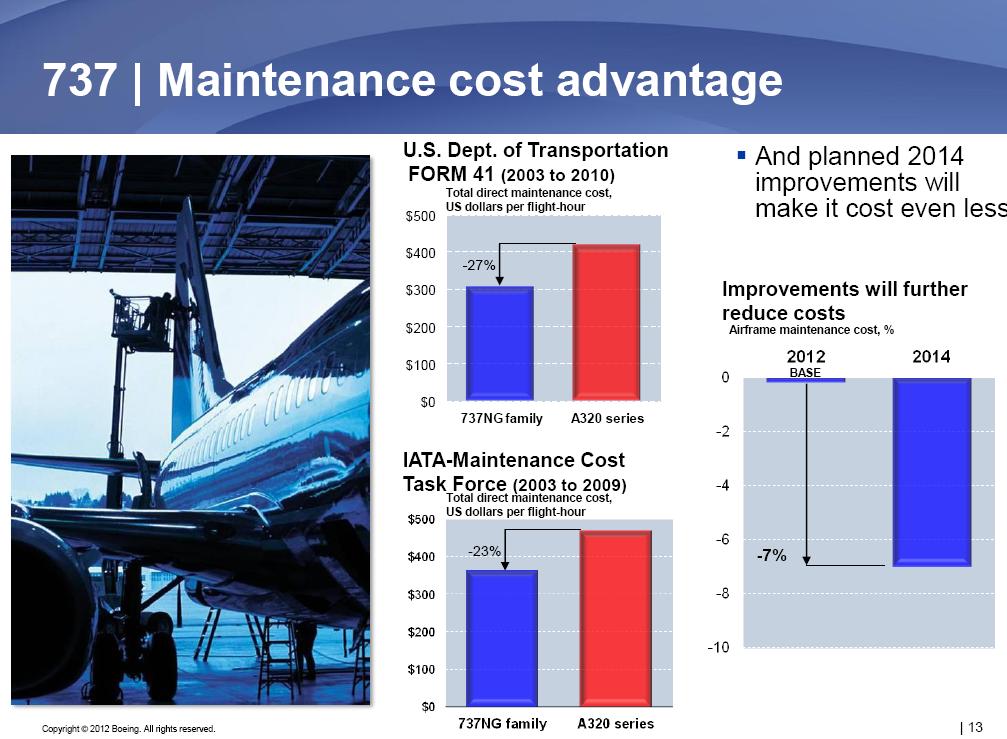 Airbus, in an interview we did following the ISTAT Barcelona meeting last September, called Boeing’s reliance on US DOT Form 41 data (top chart) an earthy substance. Form 41 data, Airbus says, can be manipulated by the airlines to mask true costs. (Our affiliate, AirInsight, largely declines to use DOT 41 data for that very reason.) The IATA data (bottom chart) is old.

Regardless of the veracity of the data, Boeing is taking steps to reduce the maintenance costs of the MAX (right-hand chart). And extending the Time Between Overhauls (TBO) or other maintenance schedules is something that will bring indisputable gains for the customers.

“We are in the process of taking a tremendous data base [on maintenance] over time and going through and reducing an airline’s required scheduled maintenance,” Wyse said. “On a periodic basis, an airline is required to take the airplane out of service for a series of checks on the structures, on the systems and on the interiors and undertake a certain amount of replacement depending on what they found. Because the aircraft has found itself statistically to perform so well that we are able to extend significantly so many of those maintenance checks, we are striving for an additional 7% improvement in scheduled maintenance that the airline will see. That also translates into reducing the out-of-service time that an aircraft will see for A check, C check and D check. We’re just in the process of completing that right now (for airframe, for systems, and the interiors, for all of them).

“We can make a statistical argument with the FAA that the checks don’t need to be performed as frequently.”