ExIm fight, again: Republicans and the conservative Heritage Foundation are once again attempting to kill the US ExIm Bank, which providing financing support for Boeing airplanes.

This isn’t a sexy topic for our readers, but it’s an important issue we’ve written about many times. While the Republicans and Heritage call this corporate welfare (of which we’re generally disdainful), we disagree in this instance. It’s a matter of competitiveness.

Loren Thompson, with whom we’ve often disagreed, and whose institute is partly funded by Boeing, takes on the effort to kill ExIm in this column. His underlying facts are valid, though his tiresome shot at Airbus subsidies and Boeing’s innocence is laughable once more. The WTO found Boeing received illegal subsidies, too, and of course we just witnessed Boeing getting the largest subsidy in corporate history from Washington (State, that is)–all of which Thompson ignores.

But this National Review magazine (a conservative one) fails in its taking Thompson to task to even mention Airbus, the principal thrust of Thompson’s piece. This is as silly as Thompson’s continued Airbus bashing.

The reason we support ExIm’s continued existence has nothing to do with who gets what subsidies; it has everything to do with the fact that Europe’s export credit agencies fund Airbus airplanes and Boeing needs to have ExIm to compete. (We’d be less harsh about Thompson if he would stick to this topic rather than beating the subsidy drum with highly selective facts on an issue for which he was paid by Boeing to issue a study during the WTO dispute.)

National Review’s critique of Thompson totally ignores the Airbus export credit support challenge. There may be merit to many practices about ExIm to criticize, but these critics need to focus on the ECA competitive advantage for Airbus should ExIm go away. Boeing’s right on this one.

A350 interior: The big Interiors Show is underway this week at Hamburg and the world gets its first look at the Airbus A350 XWB interior. USA Today has a series of photos. So does CNN.

Airbus also talked about the prospect of jamming in (our term, not Airbus’) 10 abreast in the A350. This is, of course, ironic because Airbus is in the midst of a campaign about the 18-inch seating for its nine abreast configuration. While we certainly agree that 18 inches are far more comfortable than the 17+ inch seat bottom in the Boeing 777 (at 10 abreast), we note the economic advantage Boeing has at 10 abreast to the nine abreast A350 and think this has as much to do with Airbus’ campaign as any passenger comfort.

What’s the economic difference? Our colleague in Europe did the analysis. He writes:

You gain 8% with 10 abreast as you burn a little more fuel with the heavier cabin.

C-17 production ending early: It’s the last of the McDonnell Douglas/Douglas Aircraft Co. heritage: the MDC-designed C-17 production will end next summer, about three months earlier than previously announced. This also will end aircraft production at the former MDC plant in Long Beach (CA), where the then-Douglas Aircraft Co. first produced the DC-8 through the MD-95 and the C-17. Boeing ended production of the MD-88, MD-90 and MD-11 after the two companies merged. It kept the MD-95 alive for a time as the Boeing 717, ending this production with just 156 built. There had been a prospect of building the 777X there, but Seattle won when IAM 751 ratified a new contract. There were those who always thought Long Beach, and other locations, were nothing more than a stalking horse to beat 751 into submission.

That’s no bull: For those who still think there was a fire on Malaysian Airlines flight MH370 that occurred so quickly no distress call could be made, consider this story.

MH370: The Wall Street Journal published a rendering that illustrates what tracking and recording systems may be turned off in flight. 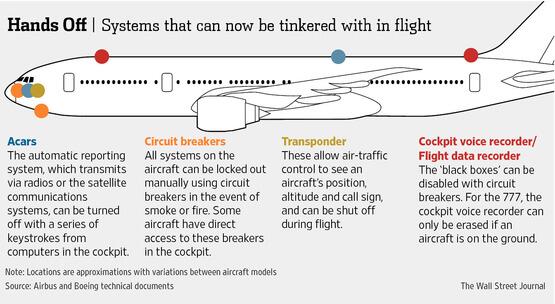