Embraer’s big bet on its largest airplane yet

Embraer is days away from the roll-out of its biggest airplane project yet and one that has the potential to make its biggest inroads yet into the global defense market: the KC-390. 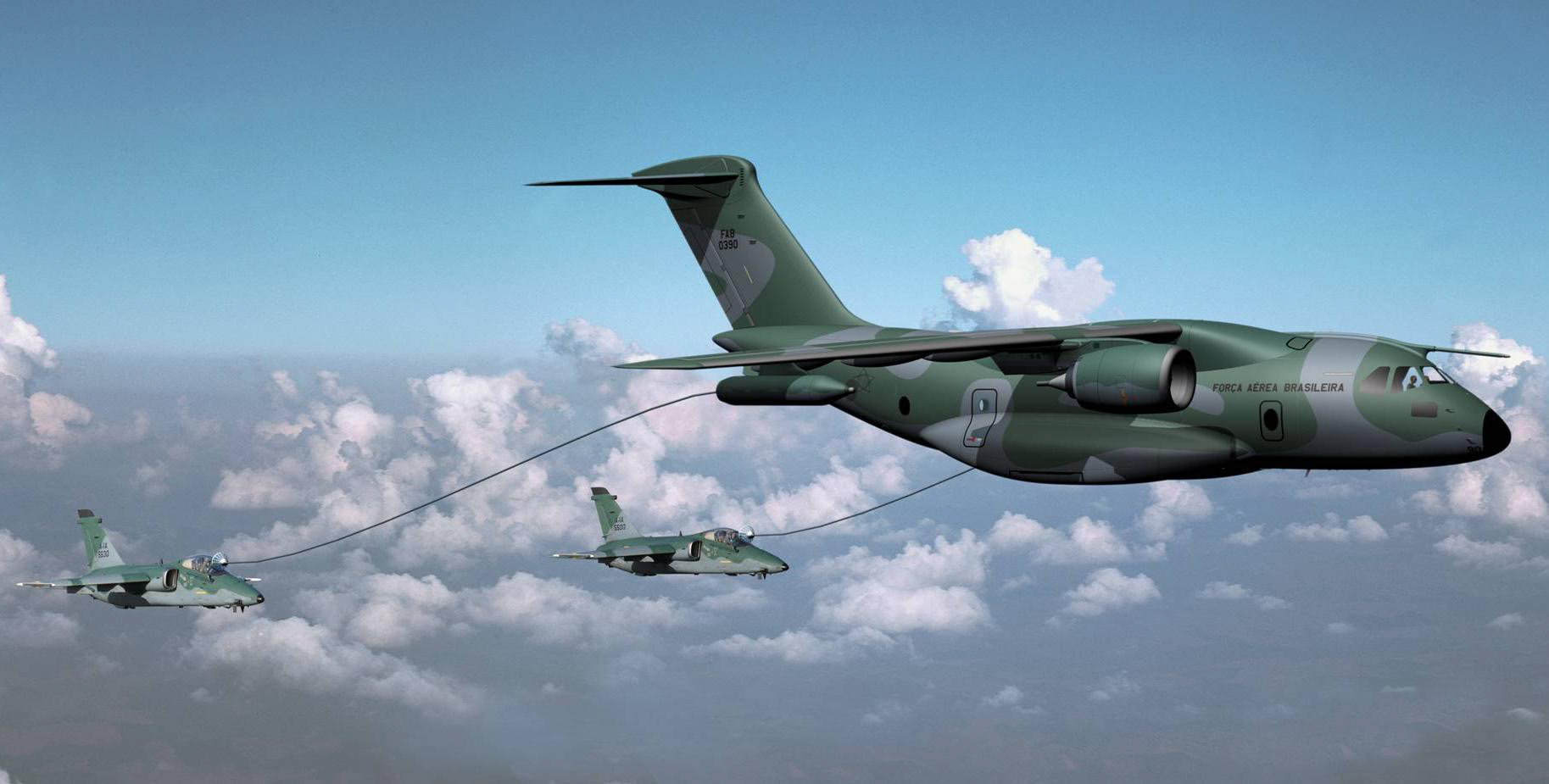 The airplane, with a fuselage cross-section the size of the Boeing 767, challenges the Lockheed Martin C-130, a venerable aircraft that has been updated throughout the decades since it first entered service in 1956. Despite this modernization, Embraer believes the time has come for a modern design and a multi-mission capability that far surpasses that of the C-130, with higher productivity of a jet aircraft vs a four-engine turbo-prop.

The Embraer KC-390 is the largest airplane developed by what has become the world’s number three airplane marker, after Boeing and Airbus. The South American company is best known today for its E-Jets and corporate jets, but has been active in the defense market since its inception in 1969 with a variety of training, single-engine support airplanes, derivatives of its commercial Embraer Regional Jets (ERJs) into surveillance aircraft and ground attack aircraft (Alenia / Embraer AMX).

The KC-390 is an entirely new design, with new structures and a manufacturing process that expands Embraer’s overall knowledge basis that eventually could be applied toward its entire enterprise.

Alexandre De Pol Fernandes, Program manager KC-390, told Leeham News and Comment (LNC) that the airplane, which was contracted with an order for 28 in 2009, will replace aging C-130s and the de Havilland DHC-5 Buffalo. The Brazilian government is underwriting the development. Brazil, which by land mass is the fifth largest country in the world (after Russia, Canada, the US and China), and the fifth largest by population (China, India, US, Indonesia). The vast distances and demographics of the population result in a need for air transport for humanitarian needs, infrastructure, search-and-rescue as well as military. The C-130 is aging and needs to be replaced. The government plans to do so with the KC-390 on a one-for-one basis. The productivity and reliability of the new airplane compared with the C-130 is self-evident. A KC-390 can fly a typical Brazilian mission of 1,540nm (Rio de Janiero to Manaus) with a common 18 tonne payload in 3:35 hrs; the slower C-130 takes six hours. 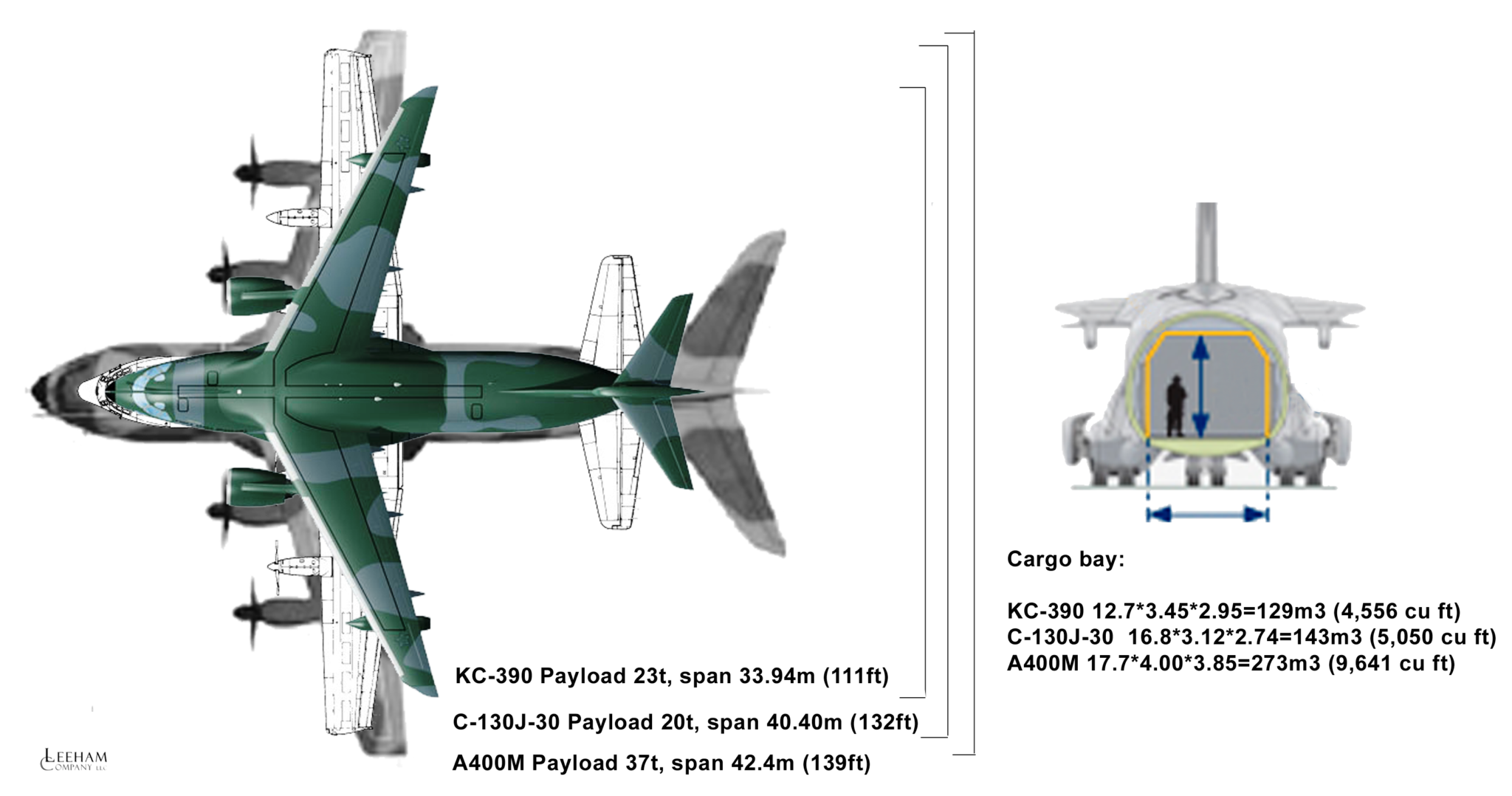 KC-390 has virtually the same payload capability as the C-130. The flat cargo bay area is shorter than the Super Hercules but this is compensated by a ramp area which is considerably longer (5.8m versus 3.1m) and at shallower angle. The KC-390 can carry seven pallets or 80 troops, or 66 paratroopers, or 74 litters plus attendants and medical support equipment, or three Humvees, or one Blackhawk chopper or one LAV25 combat vehicle.

While the number of planes ordered by Brazil is 28, small by commonly thought of Western standards (the USAF plans to buy 179 Boeing KC-46A tankers),  Fernandes points out that the Brazilian Air Force overall is small. A single US aircraft carrier carries more fighters than the Brazilian AF has. Still, there are an additional 32 KC-390s ordered by Chile, Portugal and others. Embraer sees a potential global demand of 728 airplanes from 77 countries, excluding the US, Europe, Russia and China. EMB assumes the US and Europe will likely opt for locally developed airplanes, and Russia and China present all kinds of political and legal issues, including ITAR compliance for US technology on the KC-390.

The aircraft is built in aluminum in a high wing two-engine layout, using the IAE V2500-E5 turbofan at 29.000 lbf thrust, originally developed for Airbus A320. Landing gear is designed to operate from gravel air strips.

Embraer has used its considerable knowledge of digital Fly-By-Wire (FBW) to give an aircraft a very modern and easy to operate control system. This in turn give the pilots a low workload for basic flying. This is essential so that they can then concentrate on the difficult missions the aircraft is designed for. Embraer has done all control laws with normal flying mode which contains protection from stall, over-speed etc. EMB has also designed all the autopilot modes. All flight law software is programmed by Embraer’s FBW development team.

We tested the KC-390 in the company’s flight control law simulator which was similar to the cockpit mock-up pictured below. The difference to this mock-up was that the simulator had outside synthetic vision, real Rockwell Collins Pro Line Fusion displays and functional flight controls. The difference to a full flight simulator was the missing Head-Up-Displays (HUDs) and there was no motion system moving the cockpit to simulate g-forces. 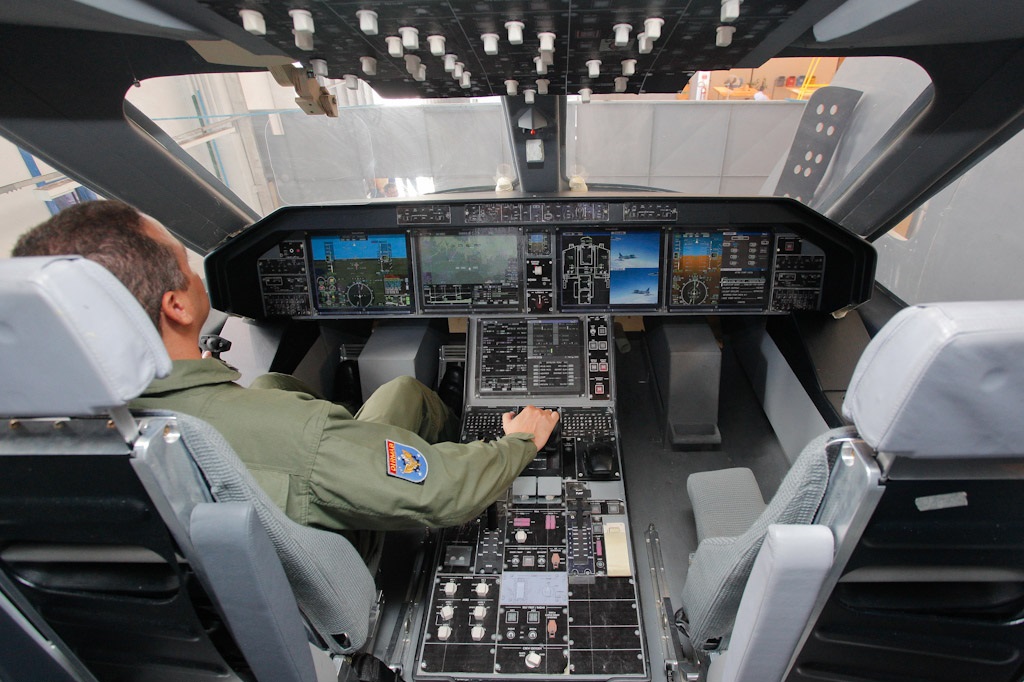 We tested normal take off and landing and then performed a take off where one engine went inoperative after lift-off. With one engine climb established, we completed the circuit and landed on one engine. Flight laws are similar to the Airbus FBW but with two distinctions: throttles are back-driven and the side-sticks are electrically inter-connected, meaning a instructor can see on his side-stick and feel what the trainee is doing with his side-stick. The FBW goes in and trims out the yaw imbalance after the loss of an engine after a slight delay. The trim delay is deliberate so that the pilot is fully aware that he has lost an engine and which side is affected. It was easy to fly the KC-390 with all engines operative or when one engine was inoperative.

Embraer is designing the KC-390 to have a mission reliability of 95%. Service strategy is similar to the company’s E-jets with A checks every 600FH or 12 months and C checks at 6000FH, 3000 Flight Cycles or 60 months, whichever comes first. A C check shall take 10 days to perform.