Two reports were issued in recent weeks, one arguing Asia is not over-ordered and the other taking a much deeper dive into the entire Asian market.

Lessor CIT Aerospace concludes not only is Asia not over-ordered but China is vastly under-ordered.

The Centre for Asia-Pacific Aviation (CAPA) issued a 72 page study that examines Southeast Asia, India and China. CAPA concludes the LCC market is only in its infancy in China, India continues to be a financial disaster and Asian airlines are struggling for profitability.

CIT is one of the world’s largest lessors, with a sizable speculative order book comprised of narrow- and wide-bodies from Airbus, Boeing and Embraer. In its four-page report, CIT writes:

CIT acknowledges that a consolidation is inevitable and will “struggle” in the short term with excess capacity. But GDP growth will drive orders.

Tony Fernandes, CEO of AirAsia Group, told us a few years ago that the geography also drives demand. Asia has few highways, lots of mountains and thousands of islands, making air travel the most feasible method of transportation.

The CAPA study, Market Analysis: Asia Pacific, begins on the front cover with the bold statement that “Asia’s full service airlines could become endangered unless they adopt new strategies for sustainability.”

Ten years ago, there were no LCCs; since then, that Asian airline industry has transformed “beyond recognition.”

Legacy carriers are struggling, with LCCs proliferating. Many have yet to achieve meaningful profitability, if at all, and some long-haul LCCs have been formed and are eating into legacy operations.

Liberalization across Asia is feeding the creation of LCCs.

“Only in this new and more relaxed regulatory atmosphere have the new pan-Asia LCCs been able to emerge and expand,” CAPA notes. “In China…there will soon be a host of…LCCs entering the market.” This is why most of the Asian order book is from LCCs, and it’s not limited to short-haul carriers. Most wide-body orders now are from long-haul LCCs, CAPA says. AirAsia X is a major Airbus A330/A350 customer. Scott and JetStar are Boeing 787 customers.

“The long-haul, low-cost model is, with the main exception of Norwegian, unique to Asia. It has prospered on north-south sectors of up to eight hours,” CAPA says. With more efficient planes entering service, longer ranges become more viable. 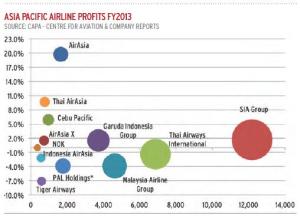 Profits remain elusive for many of Asia’s legacy and low cost carriers. Profit margin is on the left; the airline company’s size is represented by the size of the bubble. Source: CAPA. Click to enlarge.

However, profitability remains elusive. Although AirAsia’s 2013 profit margin was around 20%, this year numbers are down and the airline has deferred a handful of airplanes. JetStar has deferred, Lion Air’s LCC subsidiary faced challenges and even some of AirAsia’s affiliates are struggling. AirAsia’s initial entry into Japan fell flat, with ANA buying out AirAsia’s interests.

In Japan, we note that Skymark’s grandiose ambitions, including the now-aborted order for six Airbus A380s, have brought this carrier to the brink of collapse. A major order from a Japanese lessor, announced in advance of this week’s Zhuhai Air Show, was exclusively for the airplane size in the heart of the LCC sector. Boeing announced a new order from SMBC Aviation Capital for 80 737-8s. This is incremental and not from the Unidentifieds and it brings the MAX orders to just over 2,800. 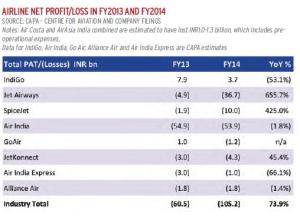 India is notoriously hostile toward airlines and profitability. Air India’s disarray is well known. But aside from Indigo, which has hundreds of A320s on order, the other airlines are losing money on a big scale, and even Indigo’s profits fell 53% YOY, according to the CAPA analysis.

CAPA believes India will have “significant” over-capacity in the next 12-18 months.

China continues to grow as a major force. Airbus and Boeing agree, in their 20-year forecasts, that China will emerge as the world’s leading market for airliner demand.

The Chinese market now accounts for about one quarter of Airbus and Boeing aircraft deliveries, according to an analysis by Flight Global. This is second to the US and it’s expected to surpass the US in the future.

But China has been slow to allow LCCs. This is changing. Honeywell, the supplier for avionics and other systems, believes that China’s move toward open skies at the end of 2013 provides great opportunities for the LCC market. Honeywell is a supplier on the COMAC C919.