Nov. 25, 2014: In our article series around the performance of a modern airliner we have now come to the climb after takeoff.

We started with cruise as this was simplest because the aircraft is flying in steady state, then we looked at the modern turbofan and how this is affected by both altitude and speed. We then examined how this affects the takeoff and today we continue with the climb after takeoff.

Before we start, let’s sum up a few points we need for today:

Last time we presented a very generic drag versus speed diagram for an aircraft, Figure 1. 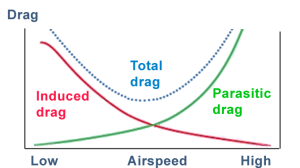 Figure 1. Drag as a function of speed for an aircraft flying at the same altitude. Source: Leeham Co. Click on image to enlarge.

It tells us that at low speed such as directly after lift-off induced drag is our primary problem. As we increase speed induced drag reduces and parasitic drag shoots up as the friction drag increases with speed.

Last time we covered the takeoff where we learned that the takeoff distance or really “runway length requirement” for an airliner is longer than the actual distance to get the aircraft in the air. This is because what is stated is the safe takeoff distance we need should one engine go bang and we have to either stay down (we haven’t lifted off yet) or we continue the takeoff past a 10m (35 ft) obstacle.

For this part we assume that our takeoff was normal and that we continue with the climb from the point of our obstacle. In our climb speed diagram, Figure 2,  we are on the green curve just after “Takeoff”, increasing speed towards point a, our initial climb speed. 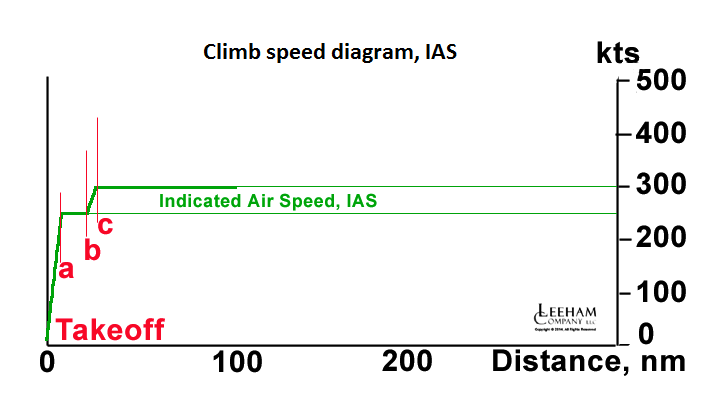 You read the speeds of the right hand axle in the diagram. It might look complicated but is not, we will go through it in steps and explain why these speeds are used. The first we have done even before reaching this point is retracted our landing gear. As our speed increases we start to retract our start flap and slat, this normally happens when we have reached 15-25 kts over our safety speed, V2. V2 or the safety speed is the minimum speed we need to be able to keep should we lose one engine, our climb angle must still be positive with a minimum angle of 2.4% (FAA certification rule). Our example aircraft, the 737 MAX 8, has a safety speed of around 155kts. With a normal takeoff we would have reached about 180kts when retracting the high lift, it would probably be just before 1500ft which is the normal point where the climb phase starts in flight planning software.

The initial climb is done with 250kts Indicated Air Speed (IAS) ( a to b in the figure) in order to keep all aircraft leaving the airport from running into each other.  Once at 10.000 ft or FL100 it is normal that we are leaving the TerMinal control Area (TMA) and we are free to pick our own speed. Our cruise Mach at our initial cruise altitude is M 0.78 which would mean that a climb Mach of around 0.76 would be appropriate (to minimize drag) but it is uneconomical to speed up to this Mach at FL100. We therefore accelerate to 300kts indicated airspeed, b to c, and hold that speed while we climb to 31,000 ft or FL 310, our initial cruise altitude.

As we climb our Mach meter (Figure 3, with Mach scale to the left) shows that the Mach is increasing all the time (c to d), when we start at 300kt and FL100 it shows M 0.54 and as we pass FL200, M 0.65. Finally as we pass FL280 our M has reached 0.76 (d) which is our recommended climb Mach. We therefore continue the flying on Mach and keep 0.76 until reaching our cruise flight level, d to e. The lines are there to show how the curves follow in sync, we take them out for the final version of the diagram. 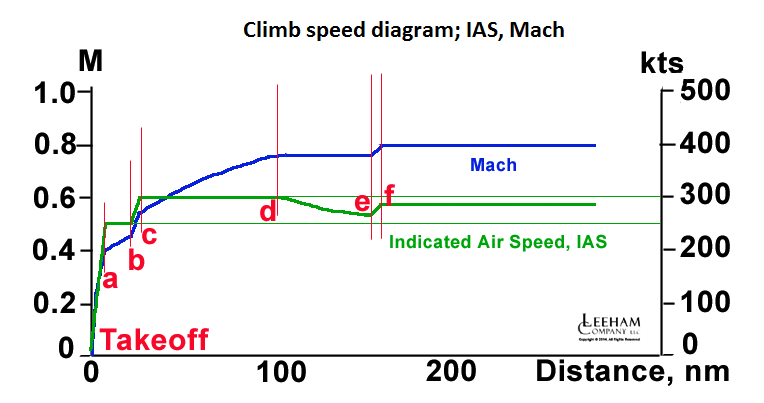 We now see that our IAS decays, d to e, until we reach our cruise altitude. This is natural as we fly on constant climb Mach and the speed of sound gets slower as the air gets thinner, consequently our IAS gets lower as we fly slower versus the air. Once at cruise altitude we speed up to our cruise Mach of 0.78, e to f, and our Indicated Air Speed settles at 290kts.

Why IAS and Mach?

Why this focus on these two types of aircraft speed? Because they tell us a lot about how the aircraft flies, one during slow flight the other for fast.

Indicated Airspeed is a good representation of the air’s dynamic pressure on the aircraft and therefore how much lift we can generate from our wing should we need it. At our safety speed of 155 kts after takeoff we are around 30kts from the speed where the downwash from the wings no longer work. Should we lower the speed to that region the wing is then trying to curve the downwash stronger then it can follow and it breaks loose from the wing surface, we get low speed buffet and ultimately stall. As we go higher our IAS reduces as we stay below a critical Mach and should we go to high it would once again approach our low speed buffet limit and we can have a high altitude stall.

Our Mach is important to know when we fly fast and high. If we fly beyond M 0.78 our regions of supersonic flow on the wing’s top side start to grow. Eventually these will be so large that their shockwaves makes the airstream break loose from our wing, we get high speed buffet.

The gradual decrease of IAS when flying at constant Mach causes an aircraft that flies very high to ultimately fly in a speed corridor where both are close to each other. This is called the coffins corner because the aircraft is bounded on both sides. An airliner have ample margins to both low speed and high speed buffet at its normal cruise altitudes but an extreme high-flyer like an U2 does not. It is flying with just a few kts to each buffet boundary at its cruise altitude of 70,000 ft. 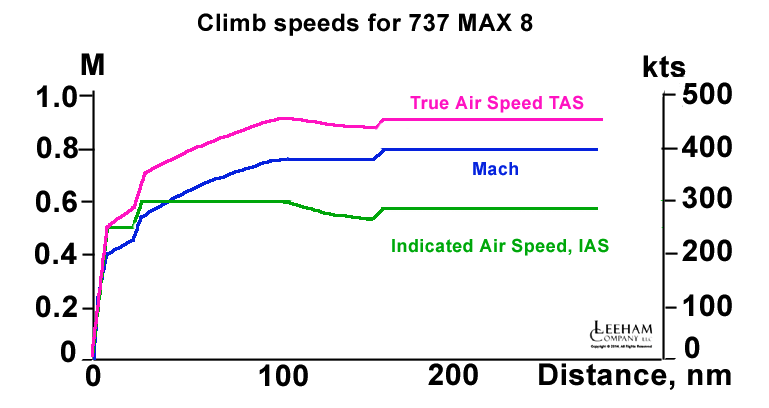 Figure 3 has the True Air Speed included and we have taken away all notations to only show the speeds. Now compare the Indicated Air Speed and True Air Speed. We see that they follow each other for low altitudes (we are at 1500ft when we start to fly with 250kts IAS) but then the TAS shoots up with about the same profile as the Mach as we approach our initial cruise altitude. We can also see that at cruise we are doing 450 kts or 450 nautical miles per hour relative to the wind and with no wind relative to the ground. This means a 1500nm trip like between New York and Houston would take around 3.3 hours with our MAX 8.

Figure 4 shows our models estimation of the drag for our 737 MAX 8 as it climbs from the safety speed altitude all the way to our initial cruise altitude of 31,000 ft and then ultimately to highest cruise altitude, 41.000 ft. 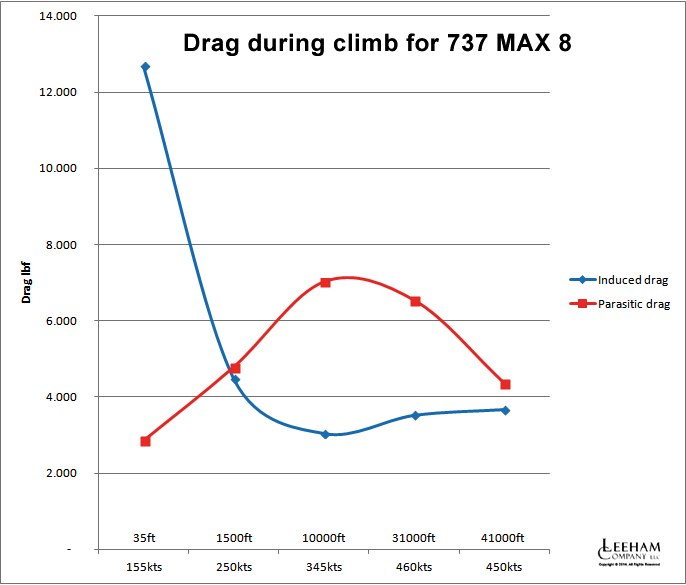 One can clearly see that the induced drag follows the principal curve we showed in Figure 1 until the air gets thin after 10.000 ft and it starts to increase again as we said in Part 3.  The parasitic drag increases with airspeed but as we get to higher altitudes (passed 10,000 ft) the skin friction diminishes enough that it start to go down and meets induced drag at the maximum flight level. We shall remember that the curve in Figure 1 was for an aircraft that flew at different speed on constant altitude, here we are going from sea level to 12 km in our diagram.

In this part we introduced 2 themes:

In our next article we will look at descent from cruise, approach and landing. After having gone through the different phases of a typical flight we will then take a closer look at some phases explaining e.g. why cruise is a bit more complicated than just flying steady state. But that is for later.