Odds and Ends: Storm Warnings; Boeing photos now available to everyone; CSeries; Movin’ on up 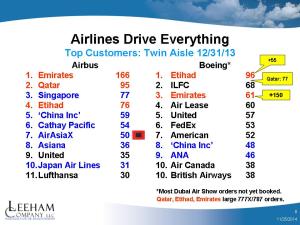 In 2013, we compiled the Top  Customers for Single-Aisle and Twin-Aisle Airplanes for Airbus and Boeing. Here’s our 2013 Storm Warning Flag list. The name comes from the flag, which signals Storm Warnings. This list was compiled before the 777X orders announced at Dubai were firmed up, so the yellow boxes show what the Top 10 Boeing rankings would be had they been. We considered the quantity of orders, the current operations, financial status and other factors in placing a carrier on our Storm Warning Flag list. The Wide-body list also illustrates the growing importance of the Middle Eastern airlines (consider that this was a year ago). The wide-body list is pretty stable. 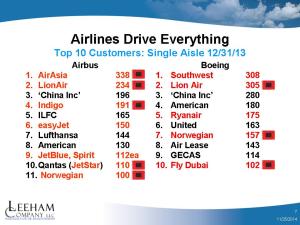 Red denotes low cost carriers. Since this list, AirAsia has deferred some A320s and so has JetBlue, though for very different reasons. Ryanair placed a large 737 MAX order this year. Source: Airbus, Boeing. Click to enlarge.

On the other hand, the narrow-body list shows far more Storm Warning Flags. This list shows the growing importance of low-fare carriers. The red are LCCs. Once more, this list is a year old and does not reflect the large number of orders placed this year, many of which have yet to be firmed up (such as India’s Indigo order for 250 A320neos and Ryanair’s large 737 MAX order). The same criteria applied to wide-bodied airlines applies here: over-ordering for the size of the airline, financial stability, etc.

We will update these lists after the end of this year.

Boeing photos: Boeing has a huge photo archive and now anyone may purchase photos at Boeing Images. For the enthusiast to the collector, the few images we perused are only the tip of the iceberg, so-to-speak.

Boeing is offering these for sale, including framing and if for Christmas, there is a deadline to place your order. This falls into the “way cool” category. Not only are there the expected legacy-Boeing photos, subjects from the various merged companies, commercial and military, airplane and space, are all there. We happen to be partial to the piston commercial airliners and here’s a direct link.

There are also short videos.

CSeries: Our interview with Bombardier’s CSeries VP and GM, Rob Dewar, and the program update, is now open to all readers.

“Though no decision has been made as it relates to our upcoming Airbus neo order, our preference moving forward is for larger A320 and A321 aircraft,” a spokesman replied.

The A319neos are scheduled for delivery in 2017. We doubt the airline will take these, but rather will be likely to up-gauge.

18 Comments on “Odds and Ends: Storm Warnings; Boeing photos now available to everyone; CSeries; Movin’ on up”