Feb. 13, 2015, c. Leeham Co.: The appointment of Alain Bellemare as president and chief executive officer of Bombardier is viewed positively by the largest and most influential customer for the slow-selling CSeries, Lufthansa Airlines Group. 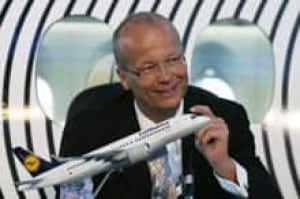 Lufthansa has a firm order for 30 CSeries and options for 30 more. The Group’s subsidiary, Swiss, is to get the firm orders. The market anticipates that the Group could eventually exercise options for its other subsidiaries.

Nico Buchholz, executive vice president for fleet management for the Group, told Leeham News and Comment today that he has worked with Bellemare as a supplier-customer for years in his previous position as an executive of Pratt & Whitney.

“He knows what it takes to do deals on engines and aircraft due to his previous experience,” Buchholz said. PW provides the Geared Turbo Fan engines for both airplanes and for the CSeries. “He knows what needs to be done. I think Alain will have ability to get deals done [for CSeries].

Bombardier has firm orders and commitments for nearly 600 CSeries. It reports 243 firm orders, but many of these are soft. Republic Airways Holdings has orders and options for 80, but a changing business plan makes it unlikely Republic will ultimately take delivery, market sources say, and Republic’s CEO has indicated as much. A large order has been placed by Russia’s Ilyushin Finance Corp., but the international political standing of Russia and sanctions placed on the country, including by Canada, cast a spell over these. Several other customers are start-up airlines or those with dodgy finances.

This makes Lufthansa Group a company that the industry is watching closely for its orders. Lufthansa has previously said Swiss won’t be the launch operator and Bombardier, while claiming there is one, so far refuses to disclose who it is.

BBD has also come under intense scrutiny for slow sales of the CSeries, which has led to a revolving door in its Aerospace division leadership and sales and marketing. This casts further doubt over the CSeries program, which coupled with two years of delays and a stubbornness on pricing and financial terms and conditions, combined to stall sales. Other factors outside Bombardier’s control also have adversely affected sales.

Questioned further Buchholz said he believes Bellemare would not have taken the new job if he didn’t receive assurances that he would be able to obtain the freedom to address the market adequately to sell the CSeries. Pierre Beaudoin, grandson of Bombardier’s founder, relinquished the CEO title and moved up to executive chairman with the recruitment of Bellemare. This is reminiscent of Bill Ford giving up the CEO title at the Ford Motor Co. and bringing in Alan Mulally from Boeing to save Ford.

Several people give Beaudoin lots of credit for doing what needed to be done.

“Our perspective is that we get someone with new ideas, somebody who knows the industry from the OEM, airline and supplier side,” Buchholz told LNC. “This is positive. Obviously he has a lot of things to do. There are some areas in his team which need attention. From a customer perspective I think Pierre did the right thing.”

It is widely thought that sales, marketing and communications are priorities that need Bellemare’s attention.

Bellemare, who assumed his duties today, said in the Thursday earnings call that included his appointment, will spend the next days and weeks diving into the company. BBD has an investors’ day next month at which analysts—and the industry—will be closely watching for Bellemare’s first moves to turn the ailing company around.

The Paris Air Show in June is a mere four months away. The stakeholders will be watching whether Bombardier will have any orders or at least commitments for the CSeries or even whether the airplane will make an appearance. Beaudoin dodged this issue on the earnings call.

While orders for the CSeries at or before the show are possible, one that would move the market seems unlikely, according to one well-placed observer. Time is too short to make a big score beyond perhaps a Letter of Intent or Memorandum of Understanding. Landing a firm, binding contract for a large order from a major customer is probably too complex to complete by then.

But Bellemare’s first 100 days, an often used unofficial benchmark for turnaround situations, will be closely watched. How Bellemare addresses the personnel and structural issues at BBD as a company and Aerospace in particular will be key indicators of the company this year and beyond.

← PNAA Conference: Airbus says A320 cancellations not as bad as numbers suggest
Playing number games with the A380 →