Playing number games with the A380

Airbus’ latest forecast now is for around 1,500 VLAs, including freighters.

Slow sales hang over the prospect of developing an A380neo. We concluded last year that Airbus had to proceed with the neo in order to spur sales. The commercial viability is a matter of great debate, but Airbus Commercial CEO Fabrice Bregier said last month Airbus will produce a neo, and even stretch the airplane.

Aviation consultant Richard Aboulafia, a critic of the A380 from the get-go, thinks Airbus would be nuts to launch a neo. At the Pacific Northwest Aerospace Alliance conference last week in Lynnwood (WA), in the heart of Boeing country, Aboulafia renewed his decades-long criticism of the airplane. 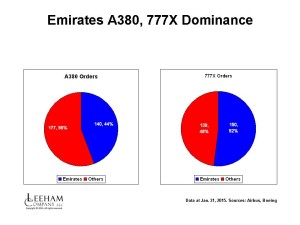 Aboulafia, in criticizing the market for the A380, eliminated the 140 orders from Emirates Airlines and 20 orders from lessor Amedeo to show that there were 157 orders.

Simon Pickup of Airbus, speaking the following day, put these orders back into discussion in support of Airbus.

We subsequently asked Aboulafia his rationale for eliminating the Emirates orders, which represent 44% of the order book.

“Emirates is a great customer, for both the A380 and 777X,” Aboulafia replied by e-mail. “I was trying to get people thinking about the A380neo launch decision, from the perspective of top Airbus management and the board.

“The first point is that aside from Emirates, there has been almost no commercial interest in this plane in recent years. And you don’t launch a plane for one customer,” he wrote.

“More than that, most of the 60% of the order book that isn’t Emirates comes from orders placed many years ago, and all the trends over the past 12 years, again, suggest no interest by non-Emirates customers. And many of these are defunct orders. In fact, the real backlog, aside from Emirates, is just 35 planes or so (remove Virgin [Atlantic], for example). And if they launch the neo, some of these 35 surviving non-Emirates orders will convert, giving Airbus a real problem with a production downturn. Airbus will also face a big problem with unwanted used planes, particularly if Emirates retires its planes at 12 years of age and replaces them with neos. If they don’t launch the neo, then Emirates might be forced to keep its current planes for longer, removing the problem of unwanted used jets.

“With this backdrop, launching the A380neo would be madness. The greatest irony…I don’t think they’ll launch it, because I have faith in the quality of their leadership.”

In a January interview with Airbus chief operating officer-customers, John Leahy outlined the strategy of dealing with used A380s, the first of which will come from Singapore Airlines. In September, Tim Clark, Emirates’ president and chief operating officer, told us he’ll just scrap his A380s as they reach 12 years.

We pointed out to Aboulafia that the Boeing 787 was launched with one customer, ANA (for 50) and by the end of the first year of sales, there were orders for just 54 787s.

“With the 787,” Aboulafia replied, “there was a demonstrated market that was many decades long. The A380 both in terms of market and product was a complete leap of faith. The Neo by contrast falls under the heading of madness.”

Emirates has a greater dominance of orders for the Boeing 777X than it does for the A380. Emirates orders 150 of the 289 “Xs”. Qatar Airways ordered 50 and Etihad 25, making Middle Eastern carriers comprise 225 of the orders. These were announced at the 2013 Dubai Air Show. Emirates and Qatar firmed their contracts last year, and Japan’s ANA placed an order for 20 in July. Other than the additional ANA order, there were no 777X orders last year.

We believe that if there is a future for the A380, it rests with the neo. Our Market Intelligence continues to tell us that Airbus will proceed and Rolls-Royce will be the engine source. Entry-into-service would be around 2020-21.

Aboulafia may be proved wrong about whether Airbus launches the program, but he has a valid point about the prospect of a production gap.