Feb. 26, 2015: As part of the invitation to cover Airbus group press conference in Munich on Feb. 27 where the annual results are presented, Airbus offered the journalists joining from South of France to fly there in one of the A350 test aircraft, the cabin test specimen MSN002. They did not have to ask twice, Figure 1. 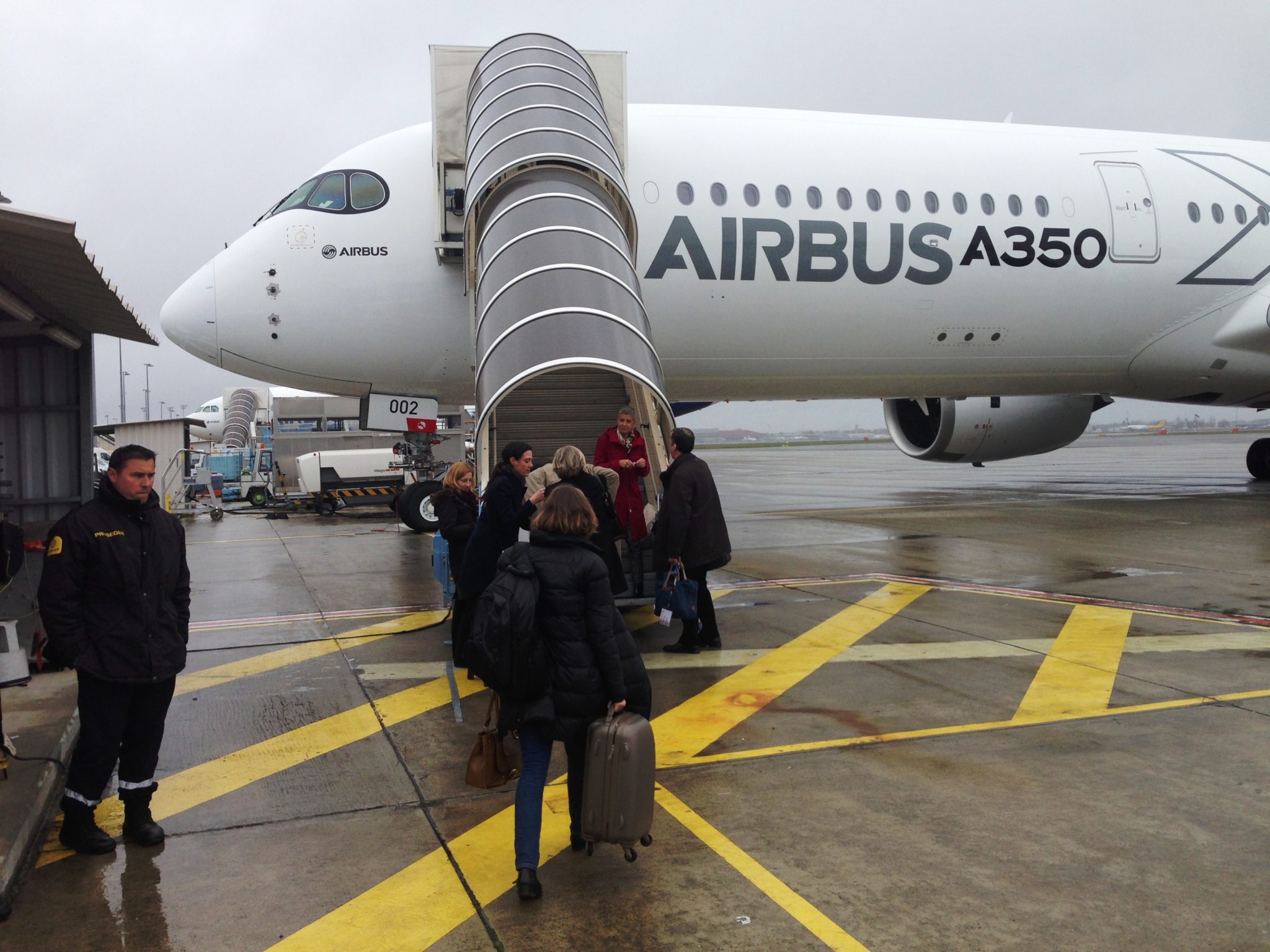 The flight was done as a combined transportation of media from Toulouse and Paris to Munich and test flight for the cabin area. It was also the first time A350 landed on Charles De Gaulle (CDG) and Munich airports, which added to the excitement. The aircraft still carried full test equipment and there were measurement probes on windows and different parts of the cabin.

The crew was the normal test crew reinforced with Airbus cabin personnel who cared for the attending journalists. The advantage of this was there was plenty of time to talk to the test engineers and pilots both in flight and while waiting for joining media at CDG. Here the story of the development workday for test people where the actual aircraft has just entered service with the first customer. But first how it was to fly:

Flying A350 as passenger

We had the chance to fly A350 both in business and economy class and to check out cockpit + crew facilities. Business class is equipped with 42 Sogerma Solstys lie flat seats, staked in an effective four abreast configuration at 41-45 inch pitch dependent on cabin position. Economy had 210 B/E Aerospace Pinnacle seats with 18 inch seat width and 31-33 inch pitch. This makes for 252 seats, but there is at least three triplets taken in the rear cabin for the flight test engineers station, Figure 2, so it is not a representative seat density for the aircraft. 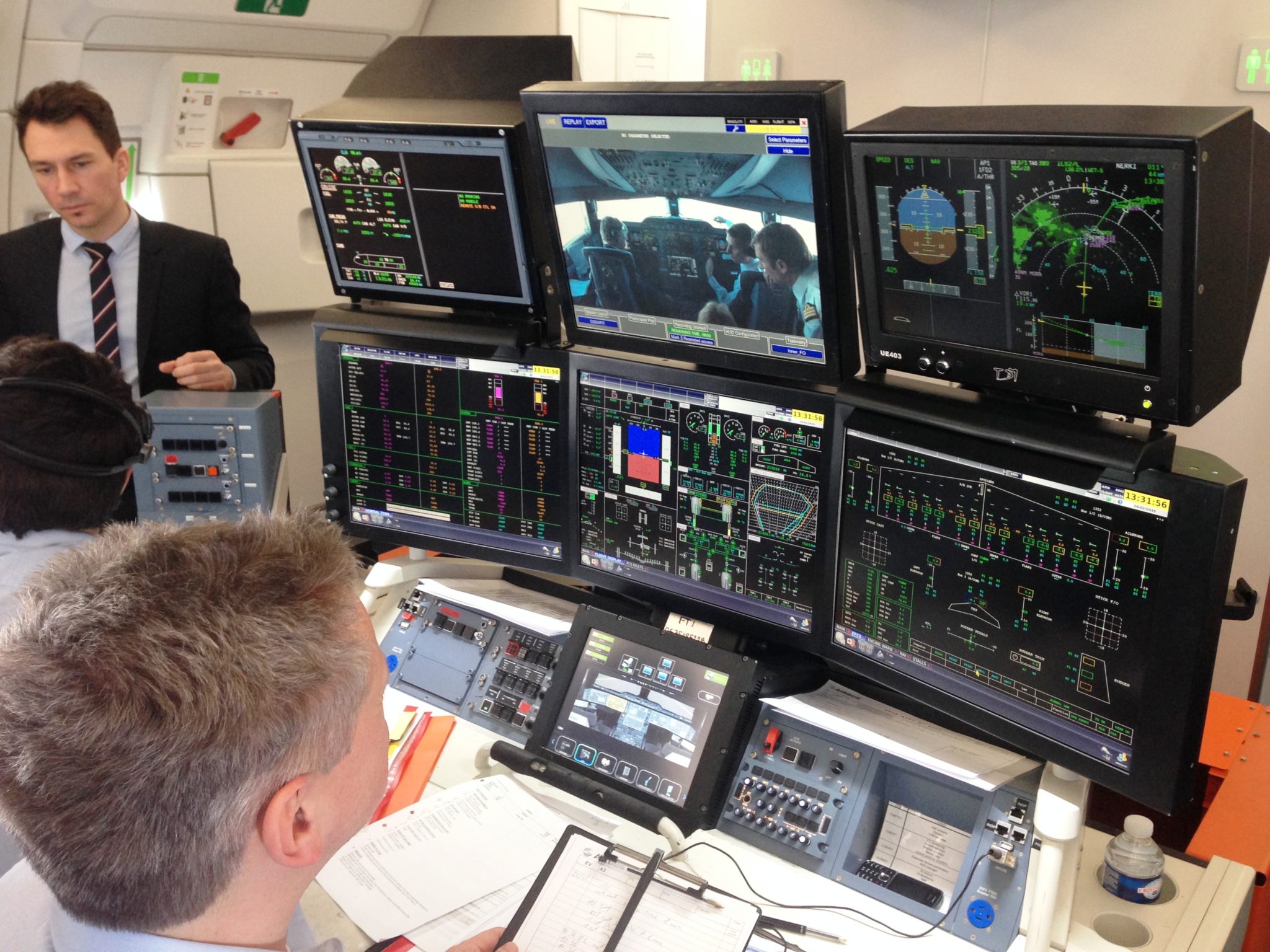 The overall impression is that of space both in business and economy class. It is not so much the space in the seats (even though there is ample space there). This is very much dictated by chosen seats from Airbus A350 catalog and how these are placed by the operator. It is more the general feeling of space in the aircraft cabin as such. The flown A350-900 is only 5%-7% larger in passenger capacity than A330/340 in the 300 versions but has the feel in the cabin of a considerably larger aircraft.

It has to do with the space above the seat rows, the roof sits higher and the overhead bins are less intrusive as on the A330/340 generation. I have not flown the Boeing 787 Dreamliner so refrain from any such comparison. The space in the seat in Business class was ample but that is a seat and configuration decision for the airlines. Space in economy is more a combination of airline standards (chosen seat and pitch) and aircraft capability (seat width). Once again the feeling was of adequate space seat wise (I am 1m85 or 6foot 2inch) and a roomy cabin ambiance.

Sound level was low but not exceptionally so. I sat just at the front of the engines when in business in a window seat and then mid wing position in economy, once again window seat. At the later there was some wing turbulence rumble noise.  The cabin ambiance was more like sitting in a nine abreast 777 than a larger replacement for A330/340.

When flying 777 I have a problem with cabin draft in several seat positions, not so in A350. I know I am ultra sensitive to this and others might not notice it, but the A350 seemed well done in terms of air circulation concept and air speeds (Boeing has the chance to surprise for 777X). All cabin sections in A350 have a cabin altitude of 6000ft as standard as has Boeing’s Dreamliner and as will the 777X. The premium cabins have higher cabin humidity as option. This raises the cruise humidity from around 5% to around 17%. As a consequence, extra de-humidifiers are required to take care of generated condensations in the fuselage insulation and other areas. Economy cabin does not have the extra humidity option.

Flying the A350 as cabin crew

While we have no competence to evaluate the working environment for A350’s cabin crew, we could do a detailed check of some important features: the cabin crew rest and the facilities for offering child families and wheel-chaired persons access to adapted lavatories.

The cabin crew rest is placed in the crown of the aft cabin with entry from the aft galley, Figure 3. 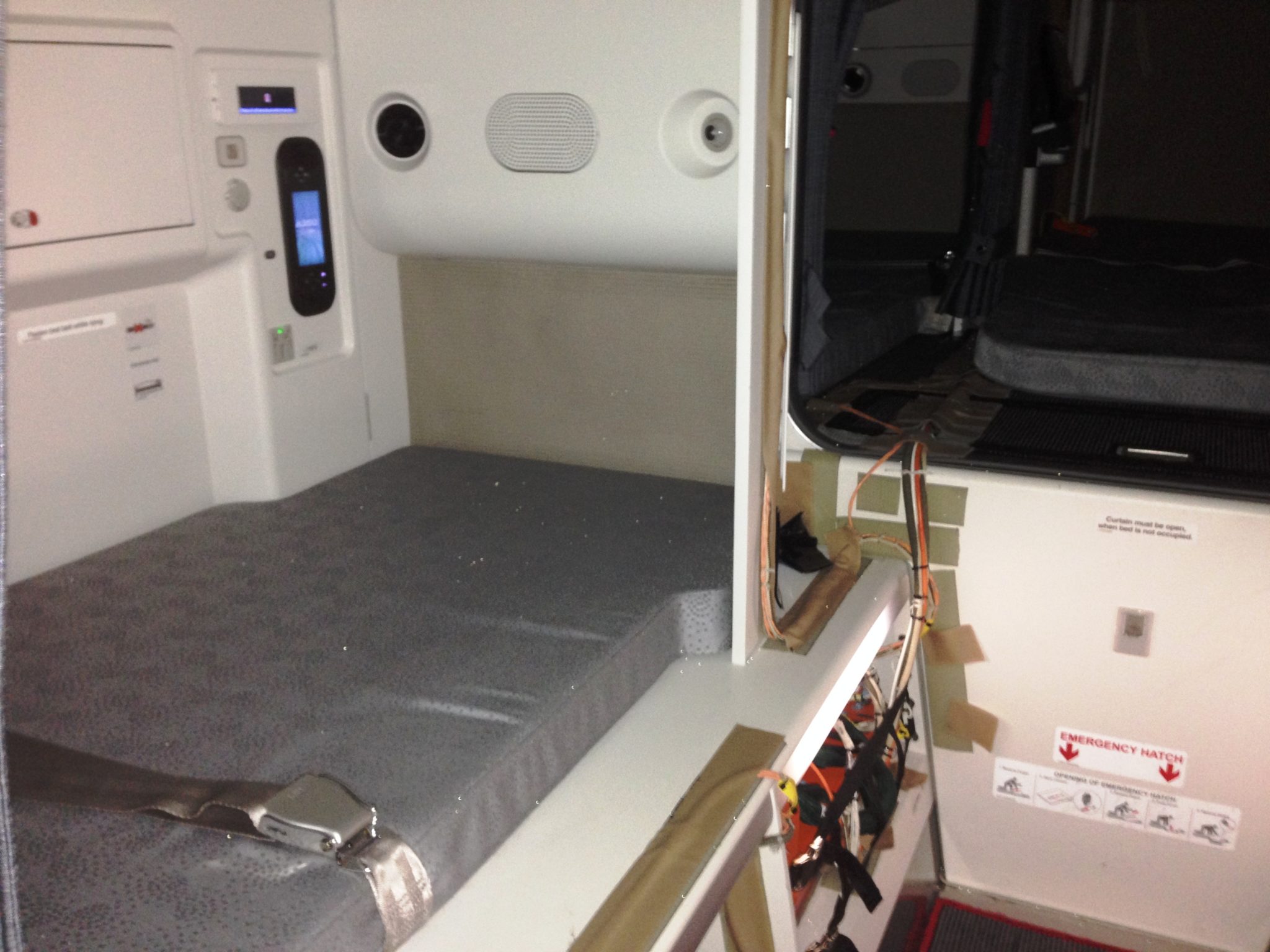 In this aircraft was the larger variant with eight bunks, three in front, two to the side and three aft of the entry area. We tried the aft ones and they were plenty large, over two meters in lengths and spacious. Sound level during flight was quite low for such an area. We were in the space with one of the cabin test engineers and feedback from cabin crews had been good but there were still detail things to improve (see below).

We could also check out a multiple use middle double lav. 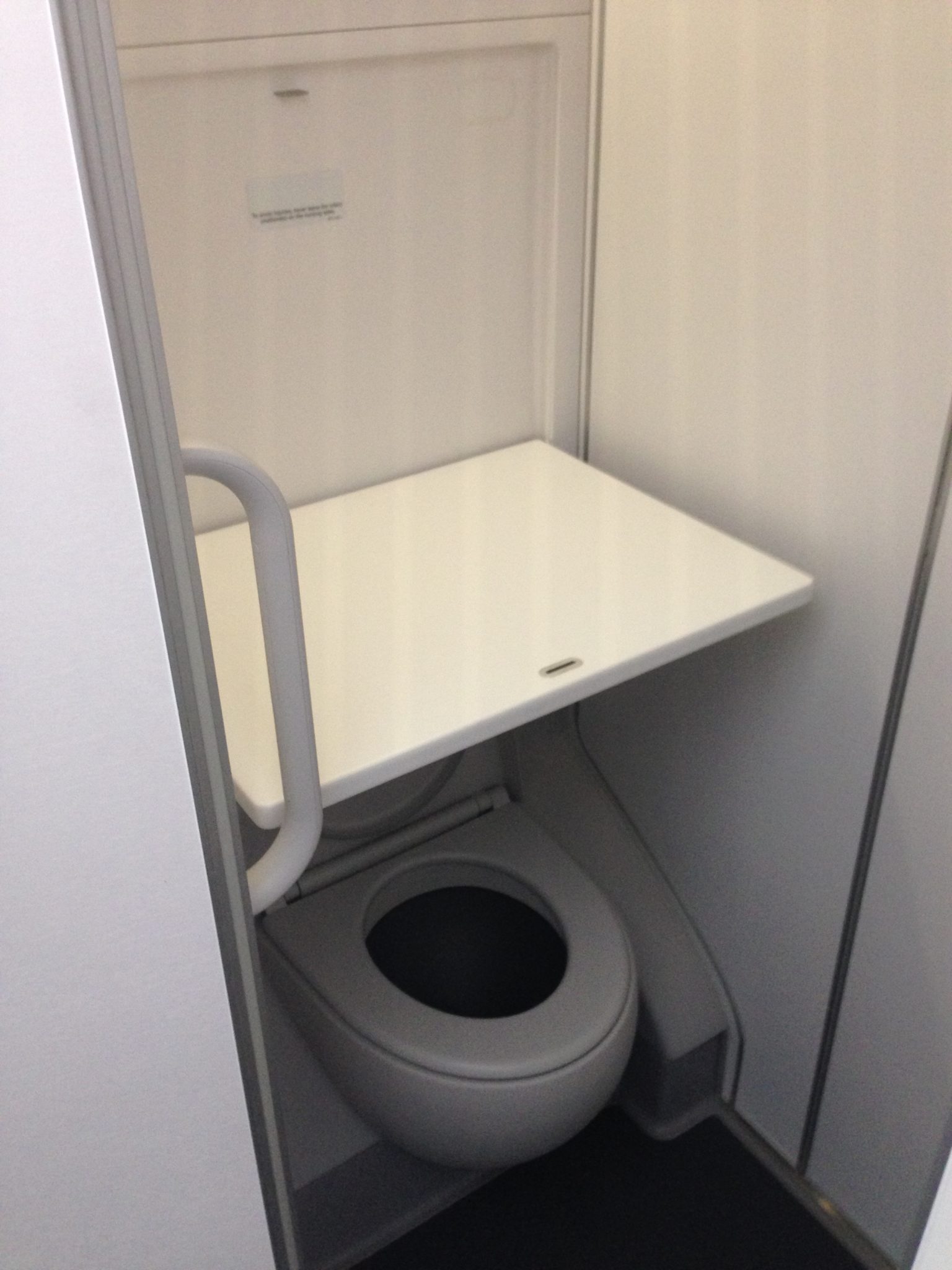 Figure 4 show left lav with child care shelf lowered and Figure 5 show the same lavatory forming the second part of a PRM (Passenger with Reduced Mobility) lavatory, the wall between the two lavs has been folded away. 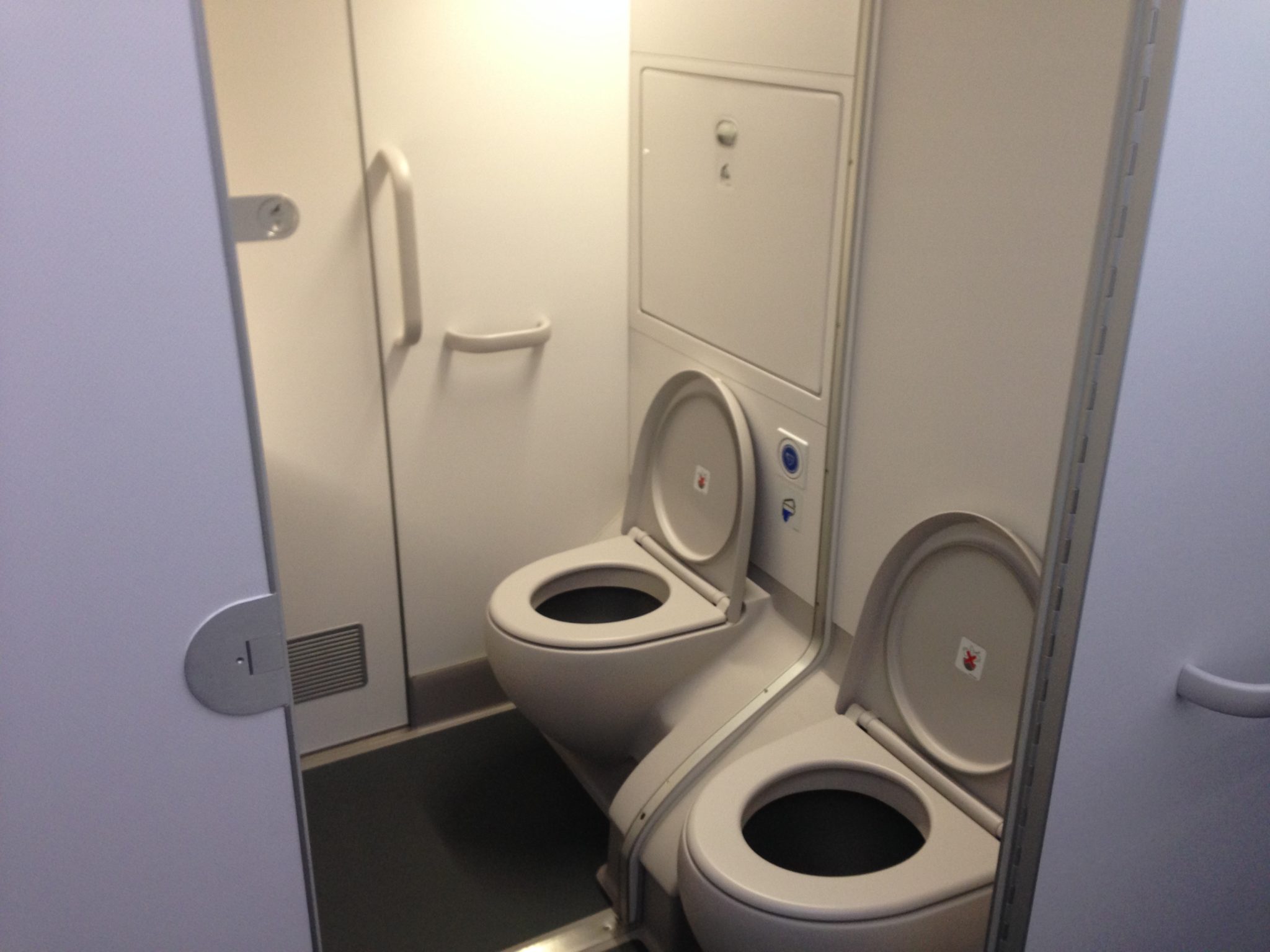 Figure 5. Same lavs from other side, now the wall has been folded away to form a PRM lav. Source: Leeham Co.

Flying the A350 as flight crew

At the stop in Paris I had the chance to talk with the pilots and to check out their work space. A350 is a good work environment for the pilots. We are going to focus on the ambiance in the flight crew work area for this article; piloting the aircraft will be for a later article.

The cockpit is roomy with two pilots seats, a third seat in the middle and a fourth clap seat to the left of the cockpit door. Directly outside the cockpit door is the entry to the overhead pilots rest. It has bunks for two pilots and a resting chair facing forward. Opposite of the rest area entrance is a lavatory and the whole area can be balked off with a privacy door. On long flights an integrated cockpit area can therefore be created including rest area, lavatory and cockpit as on space, ideal for keeping a flight crew fresh on the 15 hours flights A350 is designed for.

We spoke at length to the flight test engineers, Jaime Angoloti and Jens von Essen, both responsible for the cabin tests on MSN002. They had been working MSN002 since Februray 2014 and said that different to the A380 (which one of them also had done), they received a functioning cabin that mainly had problems in the software interface areas like between IFE suppliers and the aircraft’s functions like safety and in flight announcements. Equipment could jam another resulting in freezes and everything had to be reset. This is all controlled in software where equipment computers all talk to each other on the aircraft’s Ethernet network.

The interfaces were not mature and robust enough initially and required improvements. The cabin is presently on software release 4.2.2 and Qatar Airways as first customer has a software release which is three major versions higher than the initial release for MSN002. So things work satisfactorily now but as each airline demands modifications and adaptations, such work will not stop for quite some time.

Other than this there has mainly been detailed functional improvement requests and tests of different ideas how to lower weight or improve space utilization. There have been articles in the press about major changes to the cabin area for A350 to gain weight. We could find no evidence of such sweeping changes. Rather the work is as described by the engineers; right now the temperatures in an aft compartment around the cargo area where measured to see if the temperature kept above freezing when the insulation was reduced with 20kg. If results are positive this will go into the pipeline of continuous improvement suggestions and be decided in due course if it will form part of a future build standard. A similar test has been conducted for the cockpit area.

Other examples of improvements requested by testing airline crews were a better sleeping angle of the aft bunks in the cabin crew rest. The aircraft flies with the fuselage at 2.8° nose up and therefore the floor of the crew rest has an angle. For forward facing bunks this is OK but not for the rear which face backwards. Mattresses of these bunks are angled 3° to give a level feeling but in practical test crews has said it is not enough (I climbed in there to check, one feels like lying head down). 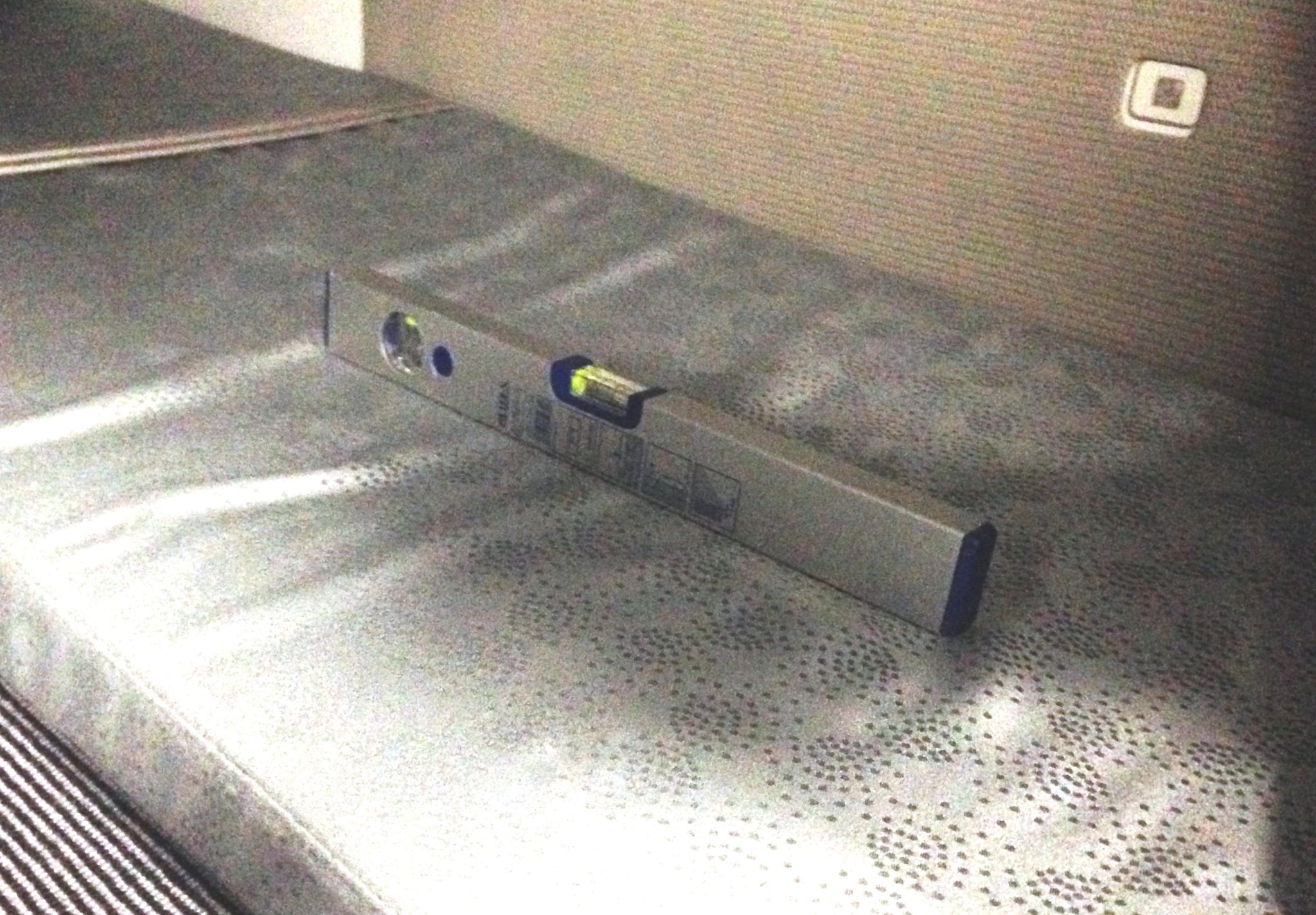 Now there are new measurements done of the actual angle (Figure 4) and then the mattresses will get a larger angle. Also the safety placard lights and IFE remotes are to strongly lit for a sleeping crew member, shall be dimmed further. This might seem trivial but is gives a good idea of the issues at hand and the kind of tests that remains to be done for A350.

Overall the feeling is of an aircraft that came together well. Work right now is to hone it from good (for where it is in its useful life) to really good. This will take continued efforts by test crews and there is also the up and coming -1000 to take through its paces. After that there is a bit of quandary as to what all the thousands of cabin experts at Airbus shall do.

There are no major cabin changes foreseen for A320neo and A330neo, the only hope is that any A380neo project requires cabin changes. 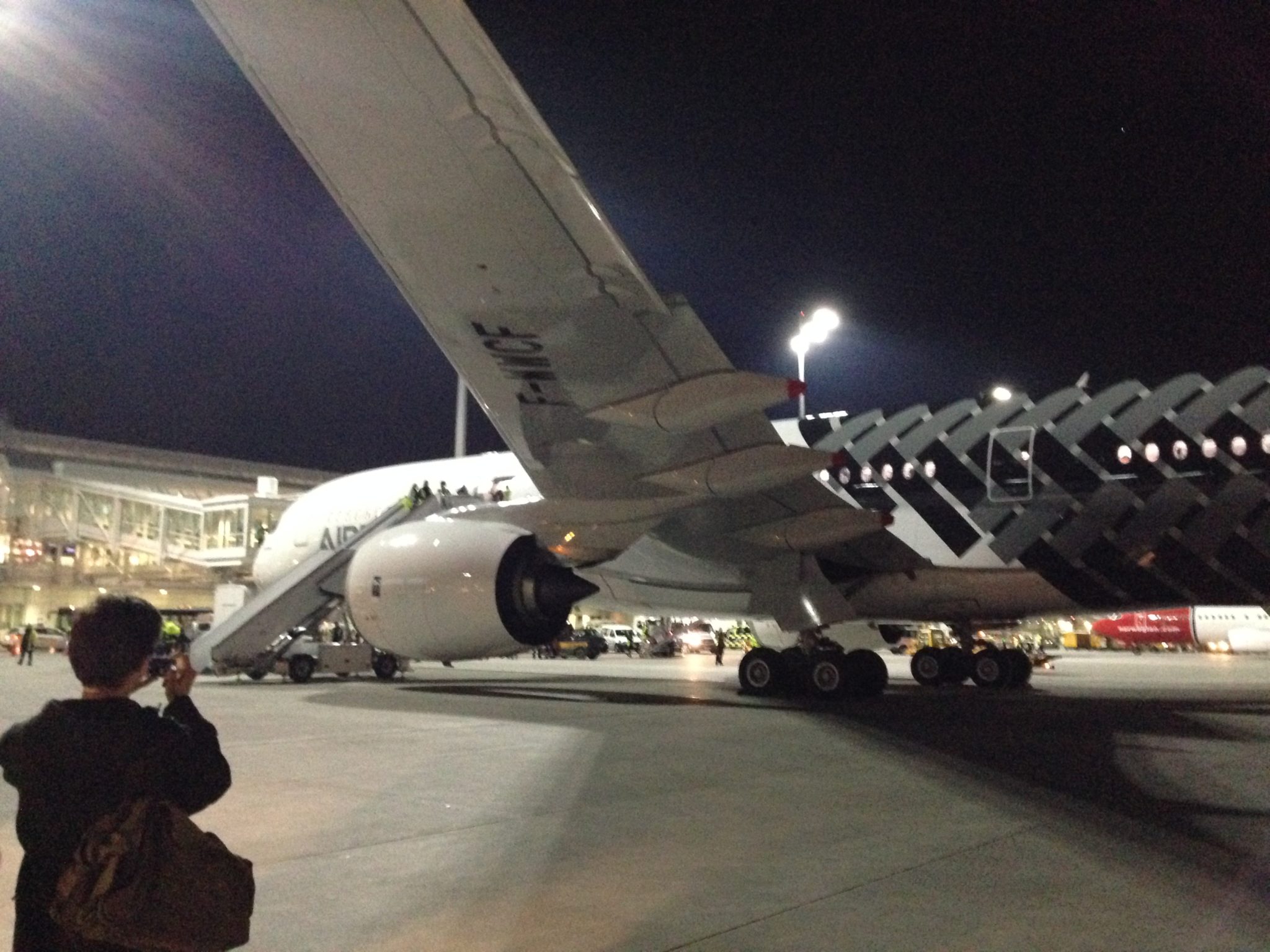 12 Comments on “Trip report: flying the A350 to Airbus Group annual press conference”