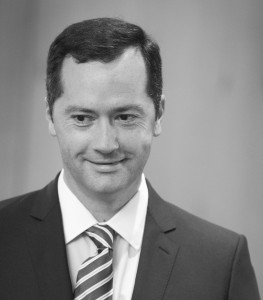 Airbus, as half owner, has the power to block the plan–and it has, saying that because ATR has 85%-90% of the market, a new airplane isn’t needed.

Despite this huge market share, ATR CEO Patrick de Castelbajac says ATR doesn’t “own” the market. The need for a larger, 90-seat turbo-prop mirrors an industry trend toward up-gauging and the ATR 72 has been stretched probably as far as it can go, says de Castelbajac.

But if Airbus isn’t on board, development of a new airplane isn’t possible, he says.

“With Airbus owning 50% there is no way we can build a 90-seater without Airbus on board,” says the ATR chief.

With Airbus saying “no,” ATR continues to look for ways to improve the ATR 72. It’s certified for 74 passengers and ATR is seeking certification for 78 using slim-line seats, a path taken by Bombardier for the Q400, now certified for 86 seats with the slim-line option.

sense, but de Castelbajac says this could result in design creep.

“There’s no technical non-starter,” he says. “We are talking with Pratt and another engine manufacturer to see how it could be done. Our aircraft is not burning much fuel to begin with. We’re looking at the engines and propellers, the entire propulsion system. But if you do that you may have to change the wing. You want to change the bleed. I’m trying to calm down engineers, everyone wants to get excited.”

Everyone, it seems, except ATR’s own chief financial officer, who de Castelbajac says isn’t excited in part because of today’s low fuel prices.

“Fuel prices being where it is now it makes the business case less attractive,” he says. “I have to get my finance people excited.” De Castelbajac doesn’t see fuel prices staying down extended time.

Another issue working against a 90-seat design: de Castelbajac says the ATR 72 is already an advanced design.

“The ATR 72 flew after the A320, it’s a modern aircraft, it’s got a glass cockpit and the cabin redone a couple of years ago. There’s no imminent need to do it. My predecessor wanted to launch next generation of turboprop but the fact is we are doing very well with 72 and we’re still selling 10 or more 42s per year. Airbus doesn’t see competition coming to bite us.”

“Fabrice sees a need to continue to improve the platform, cabin, avionics, incremental improvements, which of course is much easier to do than go for an all new aircraft,” de Castelbajac says.

ATR may not “own” the market, but it does have an overwhelming majority of between 85%-90% of the backlog at any given time vis-à-vis Bombardier and the Q400.

De Castelbajac believes the Q400 fills too narrow a niche: the high-speed sector above the baseline 300 mi turbo-prop routes and below the pure jet markets. Routes that are 300nm, about an hour, are the heart-of-the market for which the Q400 is not well suited, he says.

But new competition may be coming. India and Indonesia governments have announced programs to develop 80-90 seat turbo-props. Each country has burgeoning requirements for small airplanes serving small cities. But developing airplanes that can be exported requires certification from Europe’s EASA and the USA’s Federal Aviation Administration, tasks that are tough to meet. De Castelbajac isn’t concerned about these projects any time soon.

On the other hand, Embraer, should it choose to reenter the passenger turbo-prop market, has the ability, skills, funding and market knowledge to become a serious competitor. But de Castelbajac thinks Embraer’s next family of airplanes will be larger than its E-Jets, not a down-sizing to turbo-props.

ATR’s greatest market penetration is in Asia. It has very little in North America, where only about 80 ATRs are operating, with about half as cargo feeders for FedEx.

“One of the reasons we’ve failed to come back into the [US] market is the [union] scope clause, which doesn’t encourage airlines and pilots to go for turbo-props,” de Castelbajac says. Also, on the ATR, passengers board aircraft in the rear of the aircraft. “In many airports in small countries, [this] is an advantage but it is a disadvantage in US.”

Still, he sees thin routes supporting only 50 seat aircraft as a continuing need in the US, and for this the ATR 42 is “the best option.”

“I will focus on the way back into the US market,” he says.

Another, much broader objective is promoting safety among the small airlines and developing regions in which the ATR operates. Operations and training are bigger issues than the airplane.

“We are focusing on support to airlines on this,” de Castelbajac says “That’s the key to us. As soon as pilots get a couple of thousand hours they go to larger airlines. Operations are tough. There are short runways and not necessarily good ATCs. We are working with airlines, authorities to improve safety.”