March 12, 2015: Boeing is showing some airlines a concept it calls the 737-8ERX, a long range version of the 737-8 MAX, in response to the Airbus A321LR, Leeham News and Comment has learned. Sources within Boeing confirmed the concept but Boeing Corporate Communications did not make someone available for an interview. A spokesman said in an email, “Boeing studies many advanced concepts, innovations and technology. However, just because Boeing studies a particular concept or technology does not necessarily mean that we will be introducing that airplane or concept in the near future. Boeing makes decisions based on market and customer demand.” 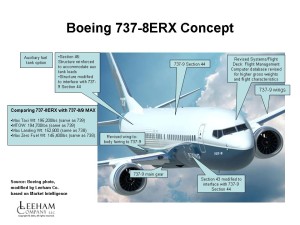 Figure 1. The Boeing 737-8ERX concept. Boeing photo, modified by Leeham Co., based on information from Market Intelligence. Click on image to enlarge.

In our article series around A321LR we concluded that Boeings 737 MAX 9 was not a good base from which to launch a long range 737, it could not be stretched in take off weight due to rotation limitations. Better would be to upgrade the take-off weight of MAX 8 for longer range, it can carry the extra fuel tanks needed and is not rotation limited in the same way.

As happened with the A321neoLR (we pointed to the possibility of the concept and Airbus was indeed working on it) Boeing now shows selected airlines a higher gross weight 737 MAX 8, Figure 1. In contrast to Airbus, which beefed up the A321neo to form the A321LR, Boeing is apparently using a concept they developed for the Navy 737 derivative, P8 Poseidon. They grab in their LEGO box of 737 components to form the 737-8ERX with minimal additional development.

Boeing’s 737 MAX, like the Airbus A320neo family, are limited in how far they can fly by the fuel their slender wings can hold. Airbus therefore adds up to three additional center tanks (ACT) to give A321LR a range of 3900nm. Boeing’s 737 also needs additional center tanks to be placed in the cargo bays to fly further. This extra fuel cost weight and to avoid that passenger seats have to be blocked with full tanks the max gross weight has to be increased in parallel with installing extra tanks.

Increasing max takeoff weight (MTOW) of an aircraft touches many components. If the extra weight is restricted to cater for more fuel, it requires “only” the beefing up of wings, landing gear and fuselage center section. For A321LR there was no stronger such parts to use. For 737-8 there was. Boeing proposes increasing the MTOW of the -8 to the -9 values and then uses its wings, landing gear and center section to cater for the increased weight.

Figure 2 shows the center section 44 for 737 MAX 8 and 9 where the latter has thicker gauge materials. 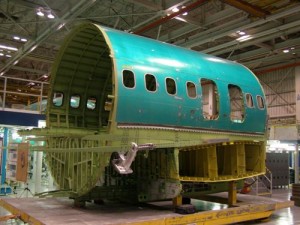 To this is bolted lightly modified front and rear sections of the -8, modified for interfacing a -9 center section and carrying the extra center tanks in their cargo area.

As the aircraft will take-off and fly with higher weights, it will have revised software in the Flight Management Computer to account for higher weights and modified flight characteristics. By using the MTOW from the -9 the extra fuel can be filled without weight becoming a limit. Combining that with max landing and max zero fuel weight from the -8 minimizes the changes needed in the -8 parts. Empty weight will land between that of -8 and -9. As the -8`s fuselage length enables ample take-off rotation, the 737-8ERX will use less runway then 737 MAX 9. 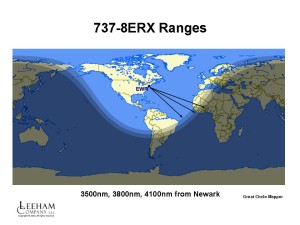 Figure 3. The 4,100nm range is based on our assumptions in our proprietary modeling. The shorter ranges use stronger headwinds and other assumptions. Source: Leeham Co., Great Circle Mapper. Click on image to enlarge.

We have entered the values for an -8ERX in our performance model. Out comes a range of around 4,000nm when using two extra tanks and a configuration with 150 seats in Business, Premium economy and Economy. A major point for Boeing will be the retained family commonality for all MAX variants, with the long range ERX not breaking with this tradition.

Entry-into-service is discussed as 2020-21, up to two years after the A321LR. This is late and will limit the ERX’s market capture in the single aisle long range market. The ERX also carriers significantly fewer passengers than the A321LR. In our previous analysis, using the cabin configuration of 169 seats for United Airlines on its Boeing 757, we concluded the A321LR would seat 164 and the 737-8 would seat 136.

We also calculated the seating for 737-8 if using a cabin configuration used by low cost carrier Norwegian Air Shuttle for its 787-8 based long range network. The ERX would then seat 168 passengers versus 787-8 291 (Norwegian’s configuration gains seats by not including lie flat or steep recliner seats). In this comparison the 737 MAX 8 had 15% lower Direct Operating Cost, an ERX variant would be close to such figures.

The low slung 737 limits what Boeing can do to answer the A321LR move by Airbus. We concluded at the time that the most promising alternative for Boeing would be a higher gross weight variant of 737 MAX 8. This is now tested on airlines which has a need for a long range single aisle alternative.

While limited in its passenger capacity our modeling shows highly competitive economics for the seats flown by a Boeing 737-8ERX.

← Redefining the 757 replacement: Requirement for the 225/5000 Sector, Part 5.
Washington State: tie jobs-for-tax breaks like other states do →