June 15, 2015, C. Leeham Co: We have previously written about the interview with Emirates Airline President and COO, Tim Clark, where he says that in the present competition for Emirates’ medium haul 330 seaters, one can see that the extreme hot conditions for Dubai International Airport can cause trouble for aircraft which are dimensioned for normal airport conditions. This will hit a dedicated medium-haul aircraft like the Boeing 787-10 harder than a long-haul aircraft turned medium-haul like the Airbus A350-900.

The latter is designed to take-off with higher weights and has therefore a larger wing and stronger engines; it has more margins in a medium-haul mission. We looked at how the engines react to hot conditions last week and will now look at the airframes.

The result of losing thrust during the take-off roll and initial climb is that speed margins of the airframe shrinks until they go negative, whereby the remedy is to lower the aircraft’s take-off weight.

We will now look at what happens with a practical example which we ran through our aircraft performance model. The engines performance were modeled with GasTurb.

Our airline like to start from Dubai International Airport with a load consisting of passengers + bags and cargo, in all, 50 tonnes. It is a typical hot day at Dubai, where we plan the take-off with 45°C (113F) temperature at the runway. Our great circle distance to Madrid is 3055nm, Figure 1. 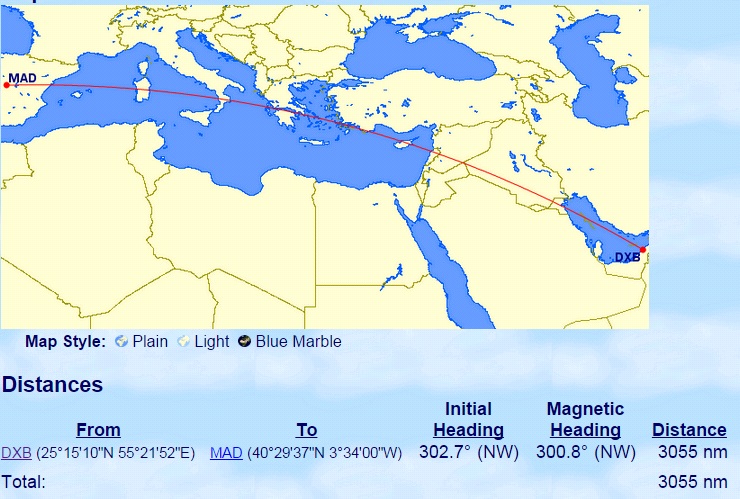 We are flying west so we must plan with prevailing winds and there is not perfect weather around Madrid, in all we need 3,800nm still air distance for our planning. We don’t take into account any flight paths to divert over war zones in this example.

We now look at how the aircraft cope with 45°C and our payload. The engines of the 787-10 delivers an average of around 60.000lbf thrust during the ground roll at these temperatures; the engines of the A350-900 deliver around 65.000lbf.

Once airborne, this reduces due to speed to 55.000lbf and 60.000lbf. For the 787-10, which has a higher wing loading and shorter span, this means we will reach the runway limit of 12.000 ft and break energy absorption limits at a take-off weight of around 230 tonnes. To fly 50 tonnes of payload to Madrid, we need a take-off weight of 240 tonnes, i.e., we are below the limit of what the aircraft can do on a summer day from Dubai. Solution is to off-load 7 tonnes of cargo.

For the A350-900 the situation is a bit different. The large wing with a low wing-loading enables us to lift off at 255 tonnes. For the trip we would have needed a take-off weight of 245 tonnes. It means there is 10 tonnes margin for longer trips, more payload or more difficult weather/winds.

The example has shown a glimpse of the planning scenario an airline like Emirates has with its extreme weather conditions and why they might come to other conclusions than airlines with more normal planning scenarios. If we did not have the take-off weight restriction on the 787-10, it can take more cargo than an A350-900. It has four more LD3 positions and a higher maximum payload limit. The question for Emirates is how often this can be used.