Pontifications: Steady as she goes at Boeing–for now

July 27, 2015, © Leeham Co. Dennis Muilenburg, who became the chief executive officer at The Boeing Co. the Tuesday after the Paris Air Show ended (and at which Jim McNerney was front-and-center in his role as CEO), was on the company earnings call for the first time in this role last Wednesday.

If anyone was expecting, or hoping for, dramatic announcements or policy changes, they were disappointed.

With this Muilenburg’s first earning call, it was McNerney’s last. Predictably, it was a love fest between the out-going and the incoming. Muilenburg and McNerney swooned over how well they worked together and praised each other’s work, accomplishments and vision. The discussion wouldn’t be any other way, absent a scandal of some kind (remember Phil Condit resigning over the air force tanker lease deal, Harry Stonecipher over zippergate). Despite the buzz on Wall Street and elsewhere of the relationship strains between the two men, those days really don’t matter now. What does matter is what comes next under Muilenburg.

For now, it’s publicly steady as she goes. Profits are up. Free Cash Flow is up. The learning curve on the 787 is coming down. The rate of growth of the deferred production costs should slow in the fourth quarter.

Yes, there are a few risks and uncertainties–these can’t be helped in a $100bn business that by its very nature flies in turbulent skies. But, according to the earnings call, everything overall is just peachy.

The typically softball questions from the Wall Street analysts didn’t illicit much in the way of news. The new media questions permitted were much more probing. Jon Ostrower of The Wall Street Journal attempted to pin McNerney down on the $835m pre-tax charge announced two days before the earnings call against the KC-46A tanker program. In an interview earlier with Aviation Week, Ostrower asked, didn’t McNerney say the previous tanker charge would be the only one? McNerney pivoted and slid safely home, saying further assessments in future quarters subsequent to that interview proved another charge was needed.

Steve Wilhelm of The Puget Sound Business Journal (Seattle) noted that hard feelings still exist with IAM 751, Boeing’s touch labor union, over the January 2014 vote in Washington State to give contract concessions in exchange for the 777X assembly site in Everett. What was Muilenburg’s view toward the unions and of the prospect of the IAM trying to organize the non-union 787 plant in Charleston? 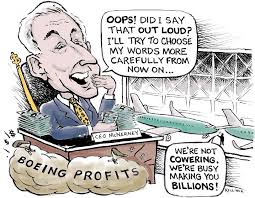 Cartoon from IAM 751. No more “cowering” under CEO Dennis Muilenburg? Click on image to enlarge.

Muilenburg proved equally adept as McNerney. He values employees, union and non-union alike, Muilenburg said. What else could he say, really? That he was going to try to make them “cower” more than McNerney? (Recall that McNerney only last January said he would be around for some time to come and employees would still be “cowering,” a remark he subsequently dismissed as a poor joke.)

If he does value the employees in Puget Sound, as of two weeks ago when I last checked, he still hadn’t talked with union leadership at SPEEA, the engineers union. They have no clue what to expect of Muilenburg, SPEEA told me. As for IAM 751, its spokesman told me Friday, “We’d welcome a dialogue. We think it would be good for our membership. But at this point, we’re not aware of Mr. Muilenburg holding any shop-floor meetings with our members here in Puget Sound, and to date he has not reached out to anyone in District 751 leadership.”

Wall Street analysts didn’t expect any dramatic announcements on the earnings call today, nor any immediate departure from established policies. But the same analysts believe that Muilenburg has about two fiscal quarters to clear the decks from the McNerney era before beginning to put his, Muilenburg’s, stamp on The Boeing Co. The earnings call included the first definitive statement that the 777 Classic production rate will be reviewed (next year)–until now McNerney and Greg Smith, the CFO of The Boeing Co., danced around the prospect of rate cuts and saying one 777X equals two or three 777 Classics. Finally it looks like Boeing is going to own up that production rates of the Classic will have to come down.

Left unsaid is what happens with the 747-8 program. There are still production gaps, even at rate 1/mo from next March, and the Volga-Dnepr MOU for 20 747-8Fs announced at the Air Show has much less to it than meets the eye–a few firm orders and the rest options, over a seven year period–or three per year if spread out evenly and all options were exercised.

Last week I had two conversations that turned up virtually identical forecasts. One was with a Boeing customer, the other with someone who has close ties within Boeing Commercial Airplanes. Neither knows the other.

Each outlined this scenario:

Boeing’s negotiations with SPEEA are going to be tricky for Muilenburg. Does he become a kinder, gentler CEO than McNerney? Or does he have to take a hard line to prove his chops with the Board of Directors?

How will Boeing handle union grievances from now on? If you listen to the unions (which are hardly disinterested), Boeing over-reacts and takes a hard line on every union complaint.

If Muilenburg has a two-quarter Honeymoon with analysts, here are some things to watch for:

← Qantas 32: cockpit resource management at work
Options for Singapore Airlines to operate direct flights to the US, part 3. →

10 Comments on “Pontifications: Steady as she goes at Boeing–for now”