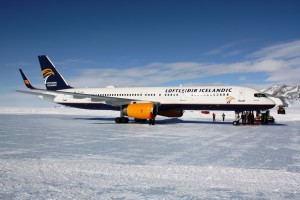 Icelandic, a sister company to Icelandair and crewed by Icelandair, operated a Boeing 757-200 into the Union Glacier station last week, Nov. 17, on a proving run. The first passenger flight was yesterday. The 757 was configured for 52J/10Y seats; there were 50 passengers. The flight originated in Puntas Arenas, Chile.

The flight was operated for a group of companies that run a camp on the glacier for scientists, mountain climbers going for Antarctica’s highest mountain, Mt Vinson or going to the South Pole one way or another through Adventure Network International (ANI.).  This is a trial operation that may lead to further flights in the coming year during the “Antarctic summer.”

The aircraft landed on a 10,000 ft blue ice runway. Ilyushin IL-76 aircraft have previously been serving the station.

It’s about a 4 1/2 hour flight from Punta Arenas to Union Glacier. Image via Google images.

This is the first (to our knowledge) operation by an airline, operating an off-the shelf airliner to Antarctica (RNZAF uses a 757-200 to McMurdo and Pegasus, Privatair has flown a BBJ to Troll, and Skytraders of Australia operate an A319CJ to Wilkins for the Australian Government). Icelandic’s 757 is Reg. # TF-FIN.

Icelandic/Icelandair has been preparing for the operation for seven months.