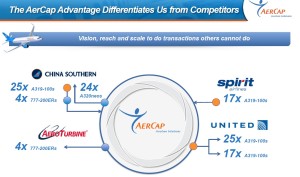 It made news in aviation circles when, early this year, mega-lessor AerCap said it will lease 25 A319s currently operated by China Southern Airlines to United Airlines in the coming years.

What was completely missed until last week was a reveal in September that 17 more A319s, these operated by Spirit Airlines are also on their way to UAL. As with the China Southern planes, these are also owned by AerCap.

Unknown to anyone but the principals, of course, is what the lease rates will be. In general–and not related specifically to the United deal–people remark that Bombardier’s biggest competition for the CS300 is “$100,000” (per month) A319s and Boeing 737-700s.

Indeed, AerCap is placing 27 737-700s with Southwest Airlines that have been operated by Aerolineas Argentinas, Transaero, China Eastern Airlines and China Southern. Southwest has a long history of opportunistically acquiring used -700s (and before this era airplane, 737-300s) at the right price, whether by purchase or lease. (I’m not suggesting BBD had any chance of selling the CS300 to Southwest, but rather to illustrate the point.

56 Comments on “Pontifications: Looking to year-end”