Bloomberg News published a story yesterday saying the fate of the 747 program rests with Air Bridge Cargo, which announced an MOU for 20 747-8Fs at last summer’s Paris Air Show.

But as LNC reported shortly after the MOU was announced–once we had the opportunity to look behind the hype–it was clear that the news was hardly anything to count on.

This remains the case despite Bloomberg’s story. 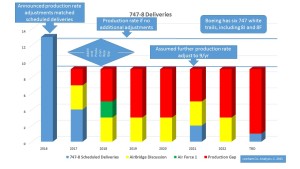 There are six white tail 747-8s, according to the Bloomberg piece, including two passenger models for TransAero. There is a third that had been intended for Lufthansa, and there are a couple of VIP models that have been stored which may or may not be considered part of the white tails count Bloomberg tallies. One known white tail freighter is the Seahawks-colored airplane that has been flying around this year. The two 747-8Fs that Air Bridge leased from Boeing Capital Corp. this year are planes that were built for Asiana Airlines, which declined to take delivery.

According to the article, Air Bridge Cargo plans to take three 747-8Fs next year on lease. These will likely be either white tails or new builds in the production. In Figure 1, we’ve included the Air Bridge three in the solid blue bar for 2016.

Air Bridge told Bloomberg it would then take “two or three” 747-8Fs per year through 2022. These are assumed to be three per year (otherwise the math doesn’t work) and allocated through 2022. This is represented by the yellow bar.

Boeing’s current production rate for the 747-8 is 16yr, reducing to 1/mo (effectively 12/yr) in March next year. At this rate, Boeing has a large production gap from the scheduled deliveries (blue) in 2017 and beyond. There are no scheduled deliveries in 2018-2020. The US Air Force plans to replace two 747-200s for Air Force One, taking delivery of at least one in 2018. We’ve assigned both of these to 2018 (green). There is one To Be Determined delivery.

We’ve assumed Boeing will take the production rate down further to 0.75/mo (9/yr) in 2017 because the production rate gap at 12/yr is similar to big a bridge to build. Even at 9/yr, and including the Air Bridge plans–of these actually firm up–there remains a gap in 2017 and increasing gaps thereafter.