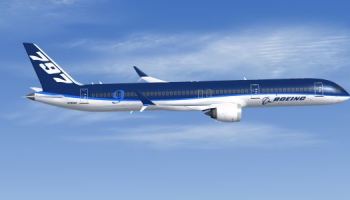 Enthusiast concept of Boeing Middle of the Market airplane. via Google images.

March 30, 2016, © Leeham Co.: Boeing is unlikely to develop a Middle of the Market airplane for a sector that could be a “mirage,” write two aerospace analysts.

Buckingham Research, in a note issued yesterday, did a “deep dive” into the MOM potential and concluded there isn’t a big enough market to support development of a new airplane. Buckingham recently upgraded Boeing stock to Neutral (Hold) from a Sell.

Bernstein Research, in a note published March 15, ventured that the MOM demand could be a “Mirage of the Market.” Bernstein is a Buy on the stock.

Goldman Sachs remains in the camp that Boeing may well proceed with development of a MOM airplane, at the cost of billions of dollars. Goldman concludes Boeing is in a lose-lose situation with the MOM. Goldman is a Sell.

“After a deep dive analysis, we think BA could decide against developing a new MOM airplane,” writes Buckingham, “either a clean sheet design or derivative because: 1) the business case for a new MOM airplane doesn’t appear compelling – we don’t think BA will be able to achieve the program gross margin necessary to justify the investment; 2) the market may not be large enough for a new MOM airplane if Airbus responds with a competing A321 derivative; and 3) the cash flow headwinds from a new airplane development program could constrain BA’s capital deployment strategy that’s focused on returning cash to shareholders through dividends and share repurchases.”

Buckingham thinks Boeing stock could trade up if the company announces it won’t pursue a MOM aircraft. Not pursuing a MOM would relieve uncertainty in the investment community over the prospect of spending billions of dollars in R&D.

Bernstein, in the March 15 note, wrote that the “The middle-of-the-market program appears to be a mirage that has taken on a life of its own, as press, analysts, and others who would like to see a new airplane have latched onto it. Panels have been convened at major conferences, even though there is not an airplane. Fuel has been added to these stories by comments that the 737MAX-9 is not competitive versus the A321neo. The problem here is that addressing the A321neo is very different than designing a clean sheet airplane that would fill the 757 space, because timing would need to be sooner and likely involve a stretch of a 737MAX-9 (not trivial, but possible) and not be a clean sheet. The true MOM airplane would be larger, with slightly longer range than today’s narrow-bodies. But, that airplane involves a number of decisions that will take time to make, which is why such an airplane should not enter the market before 2025.

“The MOM is not a complete fantasy. What is the reality? There is real work going on at Boeing to look at this space as there has been for many years,” wrote Bernstein. “Boeing Commercial Airplanes CEO, Ray Conner did say at the company’s management offsite in February that he wanted to see efforts in this area become more focused on choosing the right approach (whether or not it continues) during the next 12 months. These approaches appear to have spanned a wide range in the past. We also know that the major engine OEMs have had discussions with Boeing about different concepts. But, this is the kind of work always underway at Boeing and Airbus. Airbus has also looked at options for aircraft designs in this space.”

Goldman Sachs, in a March 29 note, writes that “Boeing has no true 757 replacement and is losing share in the segment to the A321NEO. We see a lose-lose scenario where Boeing either invests heavily and arrives late-to-market, or foregoes the segment completely.

“It would be extremely costly for Boeing to start developing a replacement today, and it would likely not enter service for another seven years,” Goldman writes. “By then we expect the majority of 757s to already have been replaced or retired. On the other hand, if Boeing elects not to develop a 757 replacement, it will almost undoubtedly lose market share long-term in this larger narrow-body category.”

Goldman notes the price war between Airbus and Boeing.

“Boeing narrowbody aircraft have lower list prices, on average, than comparable Airbus aircraft. But Boeing’s statement that it cannot compete with Airbus on price suggests substantial discounting from Airbus. Furthermore, an A321NEO at list is only 6% more than a 737 MAX 9 and only 13% more than a 737 MAX 8, making it fairly easy to envision Airbus competing via the A321NEO vs. both the MAX 8 and MAX 9 at comparable deal prices.”