Pontifications: Rockwell buying B/E Aerospace: getting out while the getting is good?

Oct. 24, 2016, © Leeham Co.: An announcement Sunday by supplier Rockwell Collins (NYSE:COL) that it will acquire B/E Aerospace (NYSE: BEAV) for $6.5bn caught analysts by surprise. The price tag rises to $8.3bn when assumption of BEAV’s debt is included.

The surprise is not so much BEAV is selling itself. A few years ago, BEAV sold of one of its division and analysts since then believed an exit strategy was underway for the principal owners of the company.

The surprise is that the buyer is Rockwell, a supplier that has little in common with BEAV. A slide from Rockwell’s own investor presentation Sunday illustrates the point.

Rockwell will have an investors’ call Monday at 0830 EDT to further explain the merger. 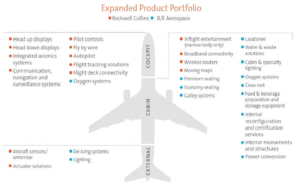 End of the cycle or cashing out?

Although as I wrote this column I hadn’t received any analyst notes commenting on the deal—these will come on Monday before and after the Rockwell call—I did speak with one analyst who thinks this is a signal the “cycle” is over.

Even after listening to his rationale, I’m unconvinced. It may be nothing more than BEAV’s principal shareholder cashing out.

Whatever the reason, it’s worth noting that the interiors business is probably becoming more difficult.

Increasing pressure on interiors suppliers from the production rate ramp-ups by Airbus and Boeing, and the new competition from the Bombardier CSeries, now entering service, cabin improvements by Embraer for its E-Jets, and (in 2-4 years), entry-into-service of the Mitsubishi MRJ90, COMAC C919 and Irkut MC-21 will add to the pressure.

Zodiac, a major supplier to Airbus and Boeing, experienced a meltdown in its business following an acquisition of a major supplier. Airbus A350s rely on Zodiac for business class seats. Famously, delays in interiors to Airbus this year resulted in delays of the airplane to customers.

As a result, Airbus kicked Zodiac out of the new A330neo program.

A year ago, Boeing experienced delivery delays for the 787 due to missing interiors.

Airbus and Boeing increasingly are selecting sole-source or reducing the number of sources for interior components: seats and galleys or lavs. Part of this is to reduce production complexity. Part of it is to reduce costs, with the favored vendor cutting prices to win the business. Part of it, as with Airbus and Zodiac, is because the airframe OEM is fed up with the performance of the supplier.

This reduces choices for airlines. It also puts pressure on the interior companies.

For companies like BEAV, the airframe OEM actions are good news and bad news.

Taking up the slack means more pressure to build the components. This might mean capital is required for expansion. With increasing production of existing airliners and adding new ones, the pressure to expand and, just as importantly, to meet delivery schedules, increases.

Getting out while the getting is good

For the shareholders of BEAV, this might be a case of getting out while the getting is good.

For the shareholders of Rockwell, the benefits are a little less obvious. Slide 3 of the Sunday investors presentation ticks off a half dozen benefits that Rockwell sees in the merger. But Rockwell sees only $160m in pre-tax cost synergies—not much for two multi-billion dollar companies.

The real potential Rockwell sees is growth beyond its current businesses and after-market business. As we know from Boeing, after-market sales and services is an increasingly important part of today’s business plans.

The investors call Monday should answer many questions. Our weekly analyst note synopsis will include parts of the subsequent notes.

7 Comments on “Pontifications: Rockwell buying B/E Aerospace: getting out while the getting is good?”