No notice in Boeing’s Seattle base

None of the local papers appeared to pick up the story. Neither of its two major unions, IAM 751 and SPEEA, appeared to notice.

The announcement was made in Tangiers with Moroccan officials in a signing ceremony with BCA CEO Ray Conner.

Ordinarily the move might have been expected to attract the attention of the unions and, in this highly charged election season, of politicians running for state and national office. But there was barely a peep, despite ample international press coverage and even a YouTube posting of the signing ceremony.

Perhaps it’s a sign of the times that global aerospace clusters are no longer as incendiary as they once were.

Suppliers from across the globe 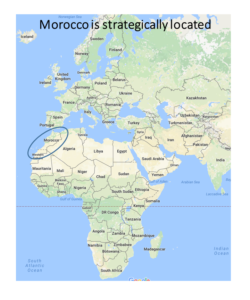 Boeing’s Washington (DC) announcement came just days before its Oct. 3 supplier forum in Seattle that focused on Morocco as a place to do business.

Under the agreement with Morocco, Boeing pledged to bring 120 suppliers there. In response to e-mail questions to Boeing this week from LNC, the company declined to go into details about the pledge, how it will be fulfilled and over what period.

“Morocco’s Government, working with Boeing, has developed an incentive package for Boeing suppliers that is designed to enable Morocco to attract more aerospace manufacturing and support Boeing’s competitiveness,” Jessica Kowal, a company spokesperson, said in a statement. “Boeing also will advise the government through a new workforce training program in Morocco.

“Boeing will share information about this opportunity and our firsthand experience working with Moroccan industry with more than 120 of our suppliers. Suppliers will be in a position to assess if the value, location and other advantages of Morocco’s aerospace industry support their business needs as well as Boeing’s requirements for our global supply chain.”

However, in LNC interviews with two people who attended the Oct. 3 meeting, they said Boeing officials revealed that the 120 companies will come from across the global supply chain, not just the US or Boeing’s cluster of suppliers in Washington State.

The intent is also for these suppliers to expand into Morocco, rather than close or shrink existing operations, the two quote Boeing officials as saying. 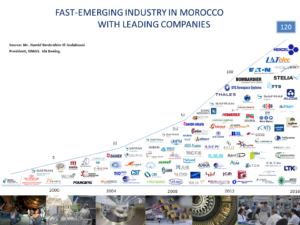 “Boeing’s experience working with Moroccan industry has been very positive.” Kowal continued. “We have 15 years of supplier-related experience in Morocco through a joint venture, MATIS Aerospace, that is currently co-owned by Boeing and Safran Electrical and Power (formerly Labinal). MATIS is a high-performing supplier making wire bundles and harnesses for three Boeing programs and other manufacturers, and its workforce has grown to more than 1,000 employees, about 80+ percent of whom are women. Other suppliers in Morocco also provide components to Boeing Commercial Airplanes programs.”

Boeing’s Current Market Outlook forecast 6.1% annual growth during the next 20 years for Africa.

“Flights between Africa and Europe continue to account for the largest share of the region’s air travel, although the market share is decreasing and is projected to continue the decline during the forecast period,” Boeing’s CMO reads. “Adding in the traffic between Africa and the Middle East and within Africa, a virtual tie for the second largest traffic flows, the top three constitute more than 86% of the total capacity, with intra-Africa being the fastest growing by net capacity.”

Boeing said Africa will need 1,150 new airplanes during the period. “While the majority of the demand will be for 810 single-aisle airplanes, the need for new widebody airplanes will also increase as air travel continues to grow among the expanding African middle class and long-distance visitors.”

While Morocco is geographically well positioned to serve this growing need, the attendees at the Oct. 3 Boeing supplier meeting said officials plan to export products globally from the country.

Supplies can be delivered to New York in seven days and the US West Coast in 30 days, one of the attendees quoted Boeing officials as saying.

Bombardier acknowledged its move to Morocco was cost-driven. The two people attending the Boeing event said officials revealed that the monthly living expenses for a typical Moroccan are $400 and even lower, at $250, for minimum wage earners there.

One of the attendees at the Boeing meeting said Moroccan officials view Turkey, Vietnam and Malaysia as the low-cost competitors, but with less stable governments or local conditions.