October 28, 2016, ©. Leeham Co: Before we go into the details on the innards of airliner turbofans, we will look at some basics. We do that so that everyone is on the same page.

A turbofan engine generates thrust by pumping air out the back of the engine. This air has a higher speed than surrounding air. Air is actually quite heavy: it weighs 1.2kg per m3 at sea level. By kicking out air at an overspeed in relation to the aircraft, thrust is generated.

In a modern turbofan, the kicking gets done by the fan to 80-90% in the modern By Pass Ratio (BPR) 8-10 engines. A single aisle engine generating 10 tonnes of thrust throws around 350kg of air per second backwards at close to sound speed in a take-off situation. To drive the fan to do that, there is a lot of shaft horse-power needed, around 30,000hp. 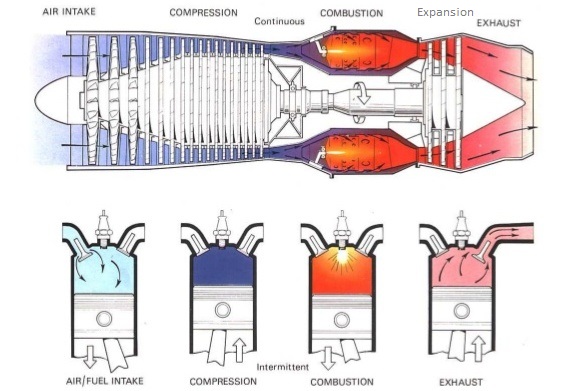 These hp are generated by the core. The thermodynamic cycle to generate all these hp in a jet engine or turbofan core (we call both a gas turbine) is like the one in a normal car engine, Figure 1, with the difference that it is a continuous cycle.

We will now go through this cycle in steps.

Air is entering in engine from ambient air via the intake. At a static take-off situation, the ram gain in the intake is zero; in fact there is a loss of a couple of percent. At speed, there will be a pressure gain from the intake.

Pressure gain (Overall Pressure Ratio, OPR) from the inlet to the end of the compressor section is around 40-55 times in modern engines. The highest in service OPR is GE Aviation’s GEnx-1B/75. It has an OPR of 58 at the end of the climb to cruise altitude, called Top of Climb (ToC). At a Static Sea Level Take-Off situation (TO SSL), the OPR for the engine is 47.

A modern petrol engine has a compression ratio of around 10. This corresponds to the airliner engines which were designed in the 1980s. The petrol engine has the problem that the fuel is injected before the compressor. As Comp rises, the fuel self-ignites (knocking).

A diesel engine and the gas turbine injects the fuel at the time of ignition. They can therefore operate with a higher Comp/OPR. Modern diesels operate with a Comp of around 16-17, this is the equivalent of the new Boeing 787 and Airbus A350 engines. The only caveat is that the diesel work with this Comp during cruise. The values I have given for turbofans are for ToC and TO situations. For cruise the compressor is spinning slower and the OPR will be more like 40.

For aircraft turbofans there is a limit somewhere over OPR 70. Several effects will make it practically impossible to reach the theoretical best OPR where the combustion of the fuel would reach the optimal efficiency. (More later.)

Another complication we will look at is that fuel which is burned at high OPR generates high levels of toxic Nitrogen Oxides, NOx. The combustor research for the last 20 years has to a large extent focused on how to decrease NOx levels in the combustion process.

The turbine section follows the combustor nozzle. In a gas turbine, the turbine section is where the energy of the combustion gas is converted into shaft hp to drive the fan and the compressor sections. The level of hp that can be extracted is dependent on the nozzle gas temperature and the efficiency of the conversion process.

The more fuel that can be injected in the combustor, the higher the gas temperature that can enter the turbines. A high turbine temperature engine core is therefore smaller for the same shaft hp generated. Turbine temperatures are today passing 1700°C/3,100°F max value for large long-range engines. For short range engines, they are typically 100-150°C/180-270°F lower.

The role of the final nozzle is to give the air exiting the core the correct speed. To generate thrust for an airliner flying at M0.85, the exit flow must have an overspeed. Therefore, the exit speed is close to M1.0.

The exit of the bypass stream of a bypass turbofan must also have a speed higher than M0.85. This is controlled by the exit of the nacelle bypass duct.

In the next Corner, we will start traversing the engine from the front, going backward while discussing the challenges and the technologies for each section in more detail.