February 3, 2017, ©. Leeham Co: In the last Corner, we went through how our airliner engine reacts to the different phases of flight, including what happens when we operate in a hot environment.

We also showed how engine manufacturers make a series of engines with different thrust ratings by de-rating the strongest version through the engine control computer.

We will now look deeper at how engines are controlled and why so-called flat-rating is important.

In Figure 2, we have added the inlet air temperature and pressure (T2, P2) and exhaust nozzle pressures P18 and P8 to our table (Figure 1 shows where these are measured). With this addition, we have the key parameters the engine manufacturer use to control the engine.

The thrust of the engine is controlled by how much fuel is injected in the combustor. This controls the temperature of the gas that enters the turbines. The energy the turbines extract from the gas is proportional to the Temperature Entering the Turbines (TET). It’s called Stator Outlet Temp, T41 in our table.

An airliner cannot function with an engine that delivers a varying thrust.  On a twin engine aircraft, this can mean different thrust levels on the two sides of the aircraft, which could cause dangerous situations.

The pilot will be able to set a thrust level and get the same thrust on both sides. This will be the case with a new engine (or fresh from overhaul) paired with one that is short of overhaul.

At the same time, as the FADEC controls the set thrust, it also makes sure that temperatures, pressures and RPMs do not go over allowed maximum values. Temperatures and pressures in the different parts of the engine are controlled so that material limits are not exceeded.

The same goes for RPM. The loads on the rotors holding the compressor and turbine blades goes up with increasing RPM. The certification documents for an engine therefore contains maximum RPMs for the engine’s low and high pressure spools.

If the air that enters the engine (T2) is colder than normal, the air temperature which enters the combustor will be lower. This means more fuel can be injected in the combustor before the maximum allowed TET is reached, creating a gas with higher energy. The engine can then develop more power over the turbines, which enables more thrust.

Structures for holding the engines depends on the maximum loads the engines can exert on the airframe. To avoid dimensioning the aircraft for a cold day (which is not the critical case for take-off), the engines are flat-rated to a maximum thrust, Figure 3. 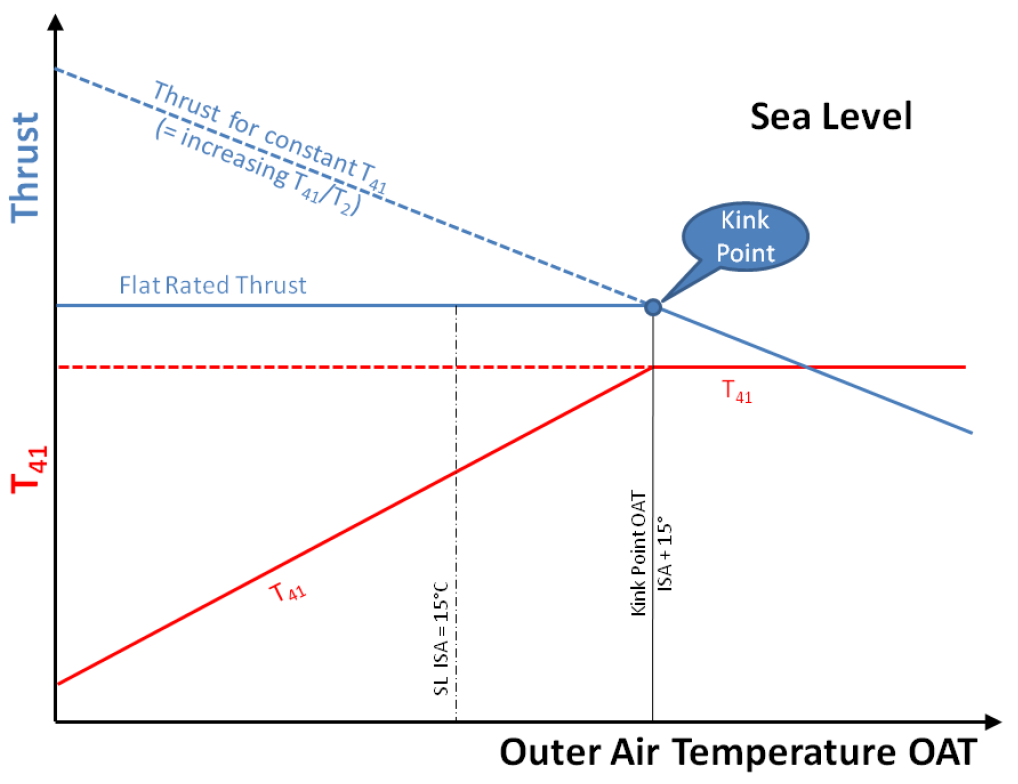 The FADEC will keep the engines take-off thrust constant at the agreed “Flat rated take-off thrust” up to an ambient temperature called the “Kink point.” This is normally 15°C over ISA, i.e. 30°C at sea level. The FADEC controls the thrust level by reducing the fuel supply to the combustor under the Kink point. The result is the turbines will run cooler (T41 showing the effect on the TET).

As we saw in Figure 2, the different phases of flight put different stress levels on the engine. An engine that would run at take-off stress levels all the time would not last long.

In the next Corner, we will look at how the FADEC brokers the aircraft’s need for thrust for different flight phases against engine longevity.