May 11, 2017, ©. Leeham Co: Airbus and Boeing had their customary presentation match at the second day of the ISTAT (International Society of Transport Aircraft Trading) conference in Hong Kong. Each OEM stuck to a theme throughout their presentations.

Boeing’s was “market leader.” As the one that delivered the most aircraft during 2016, Boeing had the right to the claim. Airbus countered with “value protection leader.” The neo success saves airlines from having to change aircraft families.

Boeing was the first on stage. Randy Tinseth, Boeing’s VP of marketing, started with promising the level of deliveries for 2017 that we saw in 2016: between 760 and 765 aircraft.

He then highlighted the 31 of March first flight of the 787-10. The next highlight will be the delivery of the first 737 MAX 8 to Malindo Air (the Lion Air daughter) later this month. Seems the disc problems for the LEAP-1B should not stop that.

The original target for the MAX 8 was delivery in 4Q2017, so second quarter is an achievement for the program. Tinseth then pointed out the revised MAX 7 and the MAX 8 both have two more seat rows than the Airbus competition.

The 737 MAX 10 was positioned as a direct competitor to the Airbus A321neo. With 5,000lb less empty weight, it should be a better performer, said Tinseth. The launch of the MAX 10 seems weeks away (Paris Air Show is the consensus).

The 787 is now a steady performer, with a 99.3% dispatch reliability. The aircraft type has enabled 140 new direct city pairs with its range and fuel efficiency.

Tinseth finished by saying the 777X had racked up a larger backlog than the Airbus A350-1000 and A380 together since its launch.

ISTAT is primarily an aircraft financing and leasing conference. The theme of preserving any investment in existing aircraft was therefore carefully chosen by Airbus VP for Leasing markets, Mark Pearman-Wright.

The A350 series is now positioned as the real long hauler. The -900ULR version is advertised with 9,700nm rnage and 19 hours endurance. What is not revealed is how many passengers are on board for such flights. Pearman-Wright also points out the A350-1000 version has been ordered by 60% of all A350-900 customers (yet with small orders; the total is 203).

He presentation was rounded off by showing ANA’s A380 livery for the Hawaiian flights. The whale of the air is finally painted as a fish (ehum,…turns out it’s a turtle). 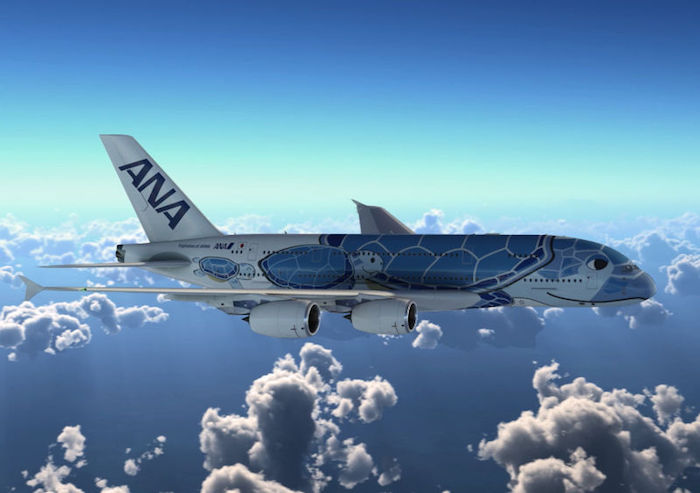 The future of the wide-body market

The debate finished with a discussion if the wide-body market sees a weakening demand. Both speakers agreed that it’s more of a timing issue than a long term weakening market.

We are not yet into the large replacement waves for wide-bodies. These start in 2022-2023. The wide-body demand will pick up when large quantities of Airbus A330 and Boeing 777 shall be replaced.