Embraer has its new E195-E2 at the show, which it is advertising heavily as a “profit hunter.” This special paint job was applied by an EMB employee, not the usual paint shop. 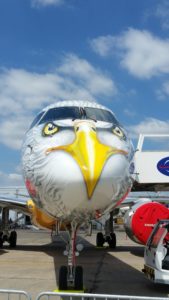 When EMB officials received price quotes from shops, the cost was unusually high because of the detail. One of Embraer’s own employees said he was a painter and could do the job. It took a little back-and-forth for officials to understand that the employee, Clodoado Quintana, was a canvass painter, an artist.

He did the job, with help from another, in his off hours.

Then officials learned the employee had never even been on an airplane.

Officials fixed that: the employee is now in Paris, enjoying his own experience of a lifetime. Here’s the video. 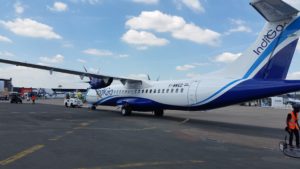 No similar story to the E195-E2. Here’s an ATR-72 being towed. Photo by Scott Hamilton. 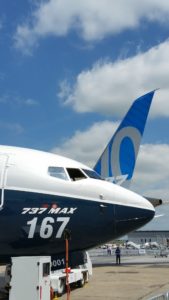 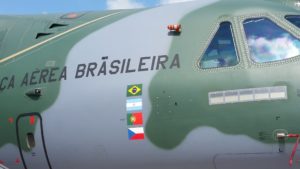 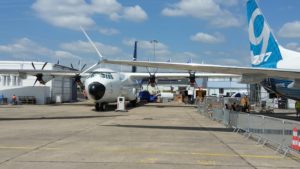 Lockheed Martin CM100, the commercial version of the venerable C-130, hiding behind the Boeing 737-9. Photo by Scott Hamilton. 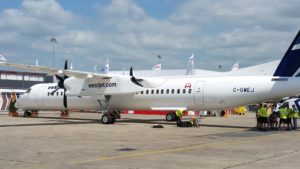 Bombardier Q400 in WestJet colors, such as they are. Photo by Scott Hamilton. 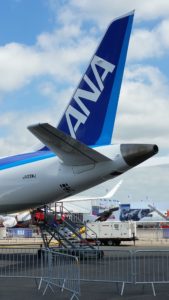 MRJ90 makes its air show debut, shown in launch customer ANA livery. The influence of the Boeing 787 is evident, and not surprising since maker Mitsubishi is a major industrial partner to Boeing on the 787. Photo by Scott Hamilton..

13 Comments on “A view around the Paris Air Show”