Is Norwegian in trouble? Part 2

July 19, 2017, © Leeham Co.: Last week we raised the question if Norwegian Air Shuttle was in trouble. The CFO, Frode Foss, left a few days earlier. Analysts were worried and the stock dived 8%.

Last Friday, the airline presented its 2Q2017 result. An optimistic report. New destinations, increasing revenue and a profit of NOK 861m ($107m). But the stock tanked further, now down 11%. What’s behind the increased worry?

The first page of the 2Q2017 report from Norwegian has several good news items amid a 7% increase in unit costs, Figure 1.

The report describes quality awards received, the delivery of new aircraft (including Boeing’s 737 MAX 8 to fly new transatlantic routes) and more cash than in a longtime. Revenue is up, net profit (EBT, Earnings Before Tax) is healthy and unit cost is only slightly up.

The airline’s headline on the report is: “Norwegian reports a pretax result of 861 million NOK and a high load factor.”  All good stuff. So what’s missing? 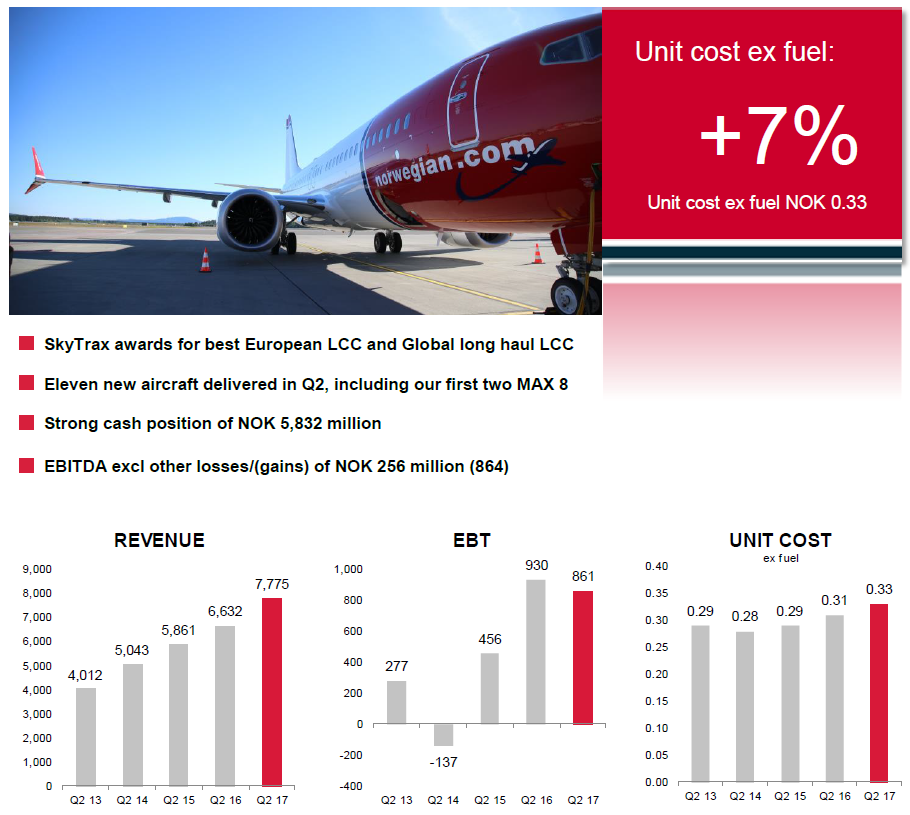 What’s missing is the operating result or EBIT (Earnings Before Interest and Taxes). The operational result for the quarter was NOK -863m, Figure 2. 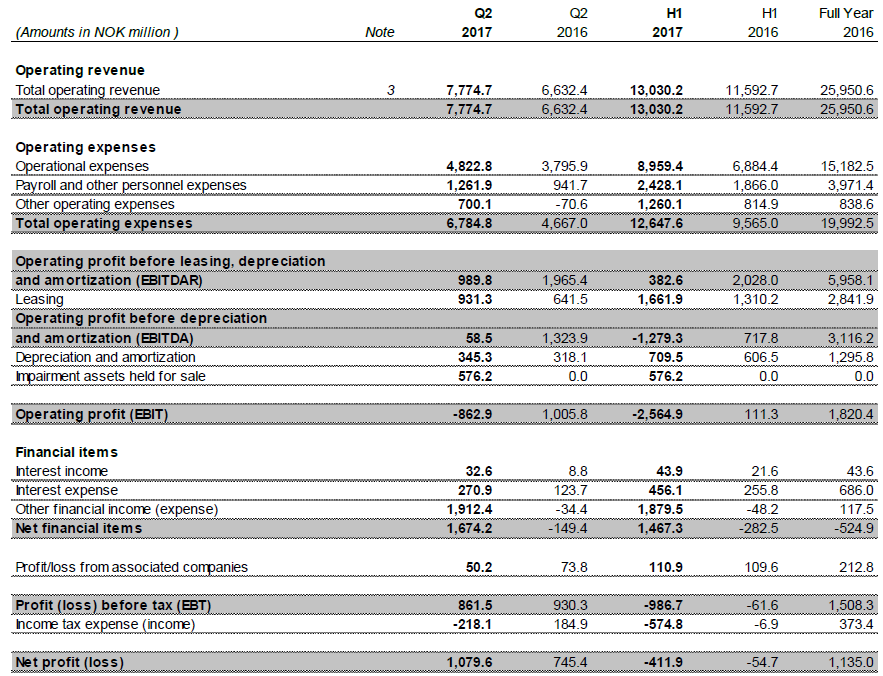 The important lines are “Financial items.” Normally this whole part is negative. The costs for financing the company’s operation and fleet is shown here. But now there is an extra line. Other financial income, NOK 1912.4m ($+237m).

This is the gain from selling the company’s table silver. In this case, it’s 2.5% of its shares in Norwegian’s external finance company, Bank Norwegian. The bank manages Norwegian’s bonus card program (Norwegian reward) and offers customers and consumers credits. The Bank was listed on the Oslo stock exchange 17 June 2016.

The bank has 900,000 customers and manages five million reward cardholders. Norwegian was the largest shareholder with 20% of shares. This is now reduced by 4.7 million shares valued at NOK 2,047m.

Without the extra cash from sale of the company’s assets, the quarterly result would have been NOK-1,100m ($-137m) and half year results NOK-2949m ($-356m)– substantial loss, clearly worse than the company’s guidance.

What forces Norwegian to sell assets to save face and keep a good liquidity? The trouble is mounting costs in several areas, Figure 3. 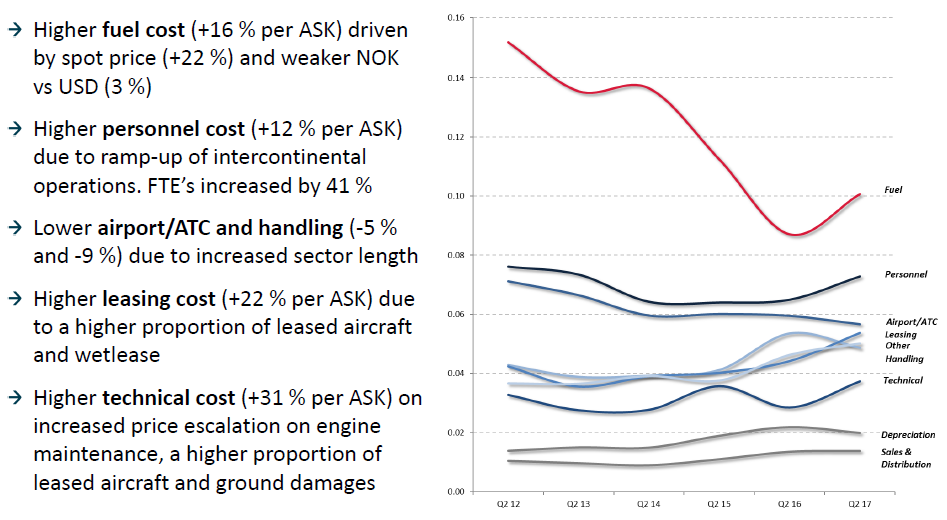 Several are natural for a fast expanding airline:

So a big portion of the mounting costs are because of costly leases of a larger portion of Norwegian’s fleet. Indirectly, this is the cost of one of the weakest balance sheets of all LCCs. To this shall be added the mounting costs for not having the most recent Airbus A320neo’s at customers, earning their leases.

Together, the costs changes increased operating expenses by 45% (Figure 4) on a revenue increase of 17%.

The result of the softening yield (ticket price for sold seat) described in last week’s article and the increasing costs, is a difference between Unit Revenue and Unit Cost of -0.07NOK for the quarter (0.36NOK-0.43NOK in Figure 5).

Norwegian’s first two quarters are weaker than the third and fourth. But it will need good further quarters to avoid selling off more of the silver.

36 Comments on “Is Norwegian in trouble? Part 2”