The aircraft is the first of five newly ordered A380. In addition, 14 of the present A380s will be upgraded to the new cabin standard. 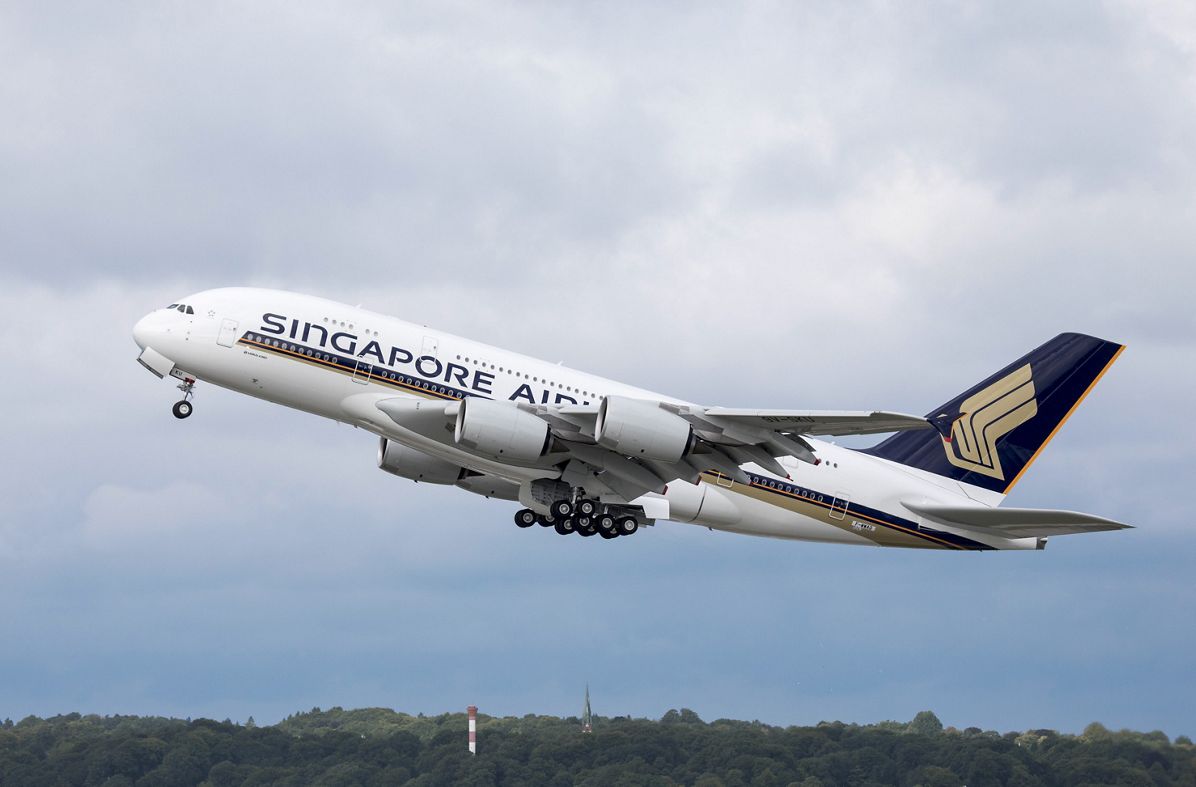 Singapore Airlines and the A380

Singapore was the first operator of the A380, accepting the first aircraft from Airbus a little over 10 years ago, in October 2007. The fleet expanded to 19 aircraft, of which the initial two are parked, having reached the end of their leases. These will be going to Hi Fly.

With the delivery of another four aircraft, the Singapore A380 fleet will stabilize at 19 aircraft after 14 A380s have gone through cabin refit.

We asked Singapore’s Executive VP of Commercial, Swee Wah Maak, about the present A380 fleet size and if any future orders would be coming.

“This is the right size fleet for us,” he said. “We use the A380 on our largest trunk routes and for the busiest departures of the day. The fleet of 19 A380 will serve us well and for the foreseeable future. The new A380s are the first with our new A380 cabin standard. Airbus and we will retrofit 14 of our present A380s to this high standard. We will spend $850m on this cabin change. It’s a significant upgrade for us, and shows how important a premium customer experience is for us on our flagship aircraft.”

After a general briefing on the A380, we were allowed to board the new A380. After our trying-out the new cabins, the aircraft would fly to Singapore and begin service on a Singapore-Sydney flight, Monday next week.

The partition of the aircraft into its four classes has improved. Where previously 443 seats fitted in four classes (12 First, 60 business, 38 Premium, 333 Economy), the new configuration (Figure 1) houses 471 seats, divided as:

Figure 1. The cabin layout of the latest Singapore Airlines A380. Source: Airbus.

We first entered the Premium economy area on the main deck. Nice seats (Figure 3), plenty of space and large IFE screens, but nothing special. 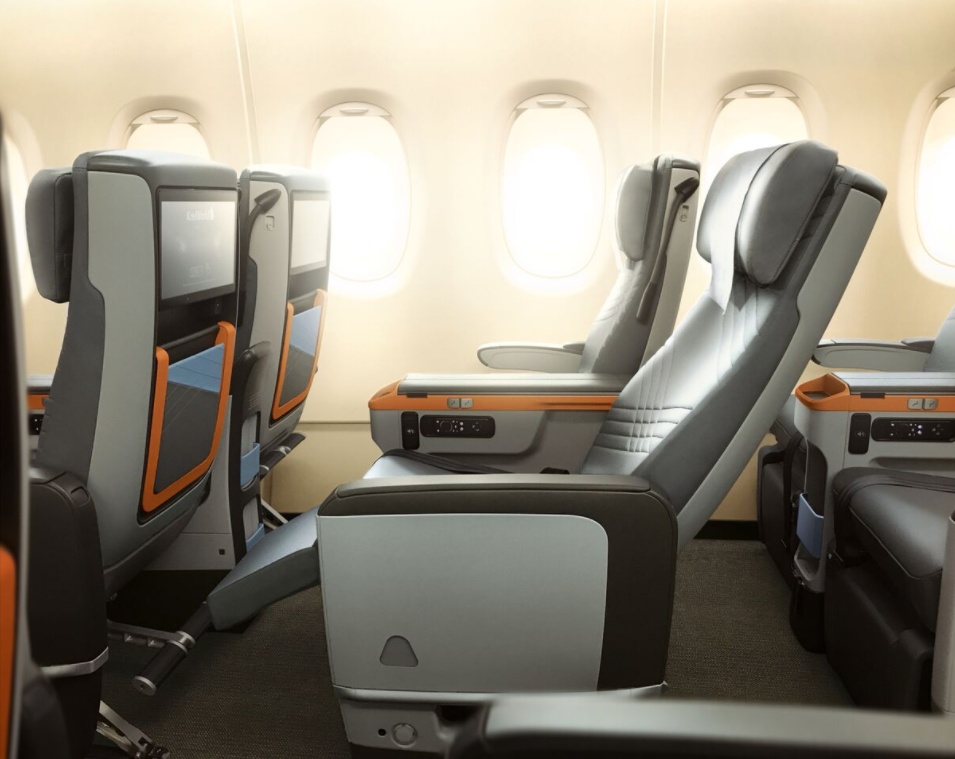 The same for the following Economy section. Plenty of space for an economy cabin and the latest seat type with large IFE screens and any imaginable charging plug. But this is standard today.

The business class can’t be labelled as standard. The seats are large, organized as mini-cabins with plenty of space. The author can be seen in a middle seat in Figure 2, enjoying the space. 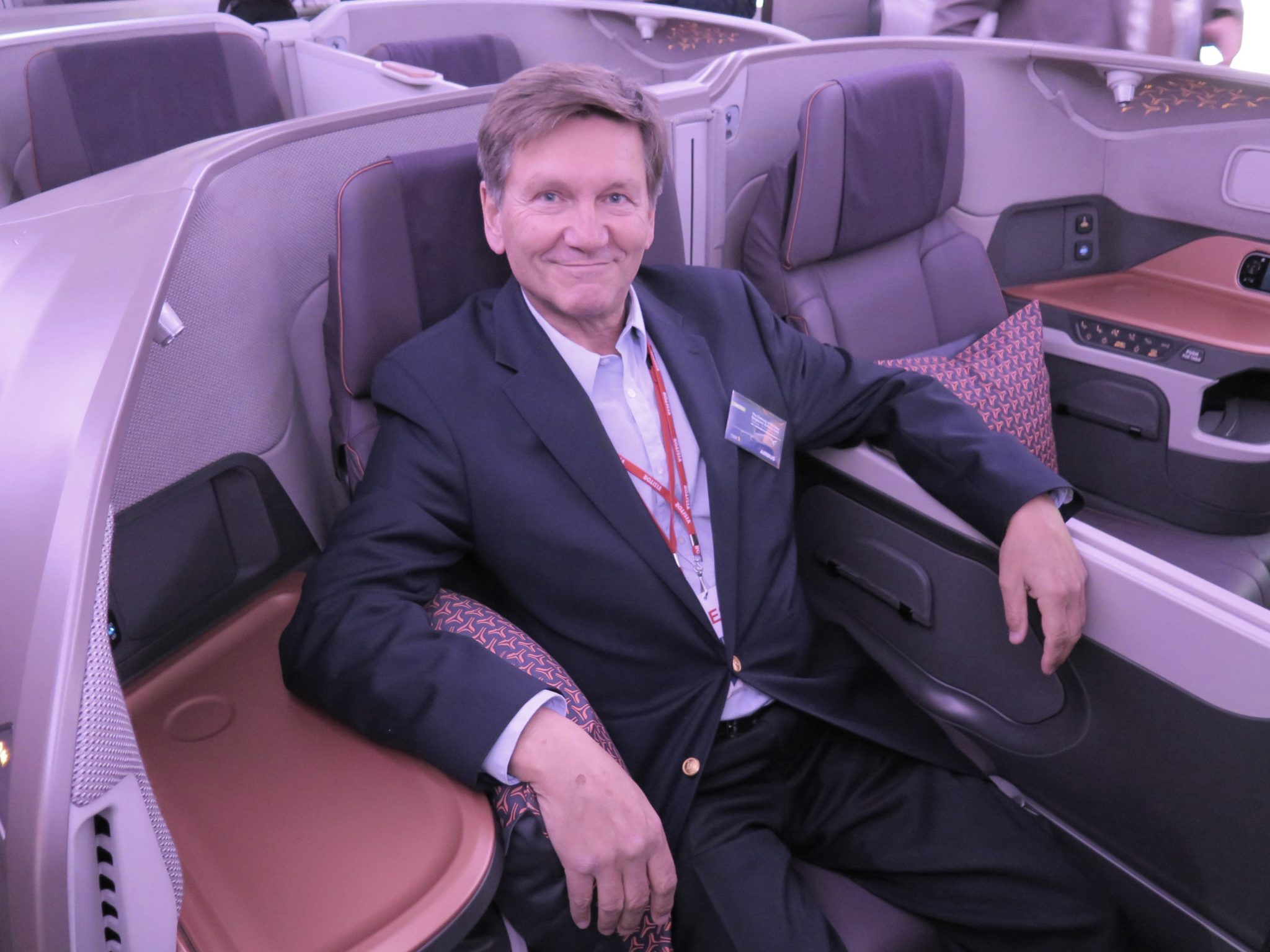 Figure 2. The new A380 Business seat made by Zodiac to JPA design. Source: LNC.

The side seats use the new cupboard-free area for the foothold when sleeping. By it, more seats can be housed on the upper deck. As the passenger sits towards the aisle, there is no headroom problem with placing the seat closer to the sloping wall of the A380 upper deck, Figure 5. 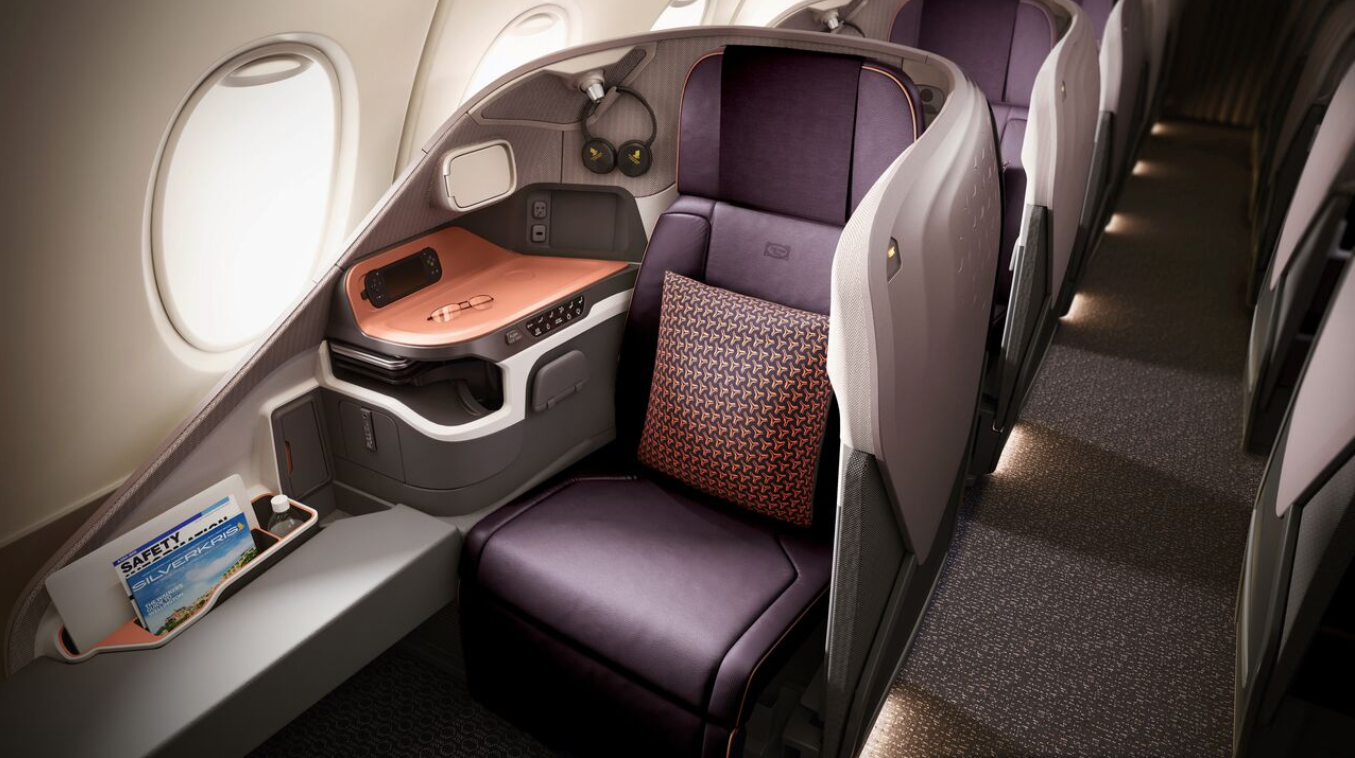 Figure 5. The new business seat for the A380 side, placed closer to the windows. Source:  Airbus.

The gem of the new A380 cabins is the First-class suites. The normal suites are configured as small studies when the beds are folded, Figure 6. 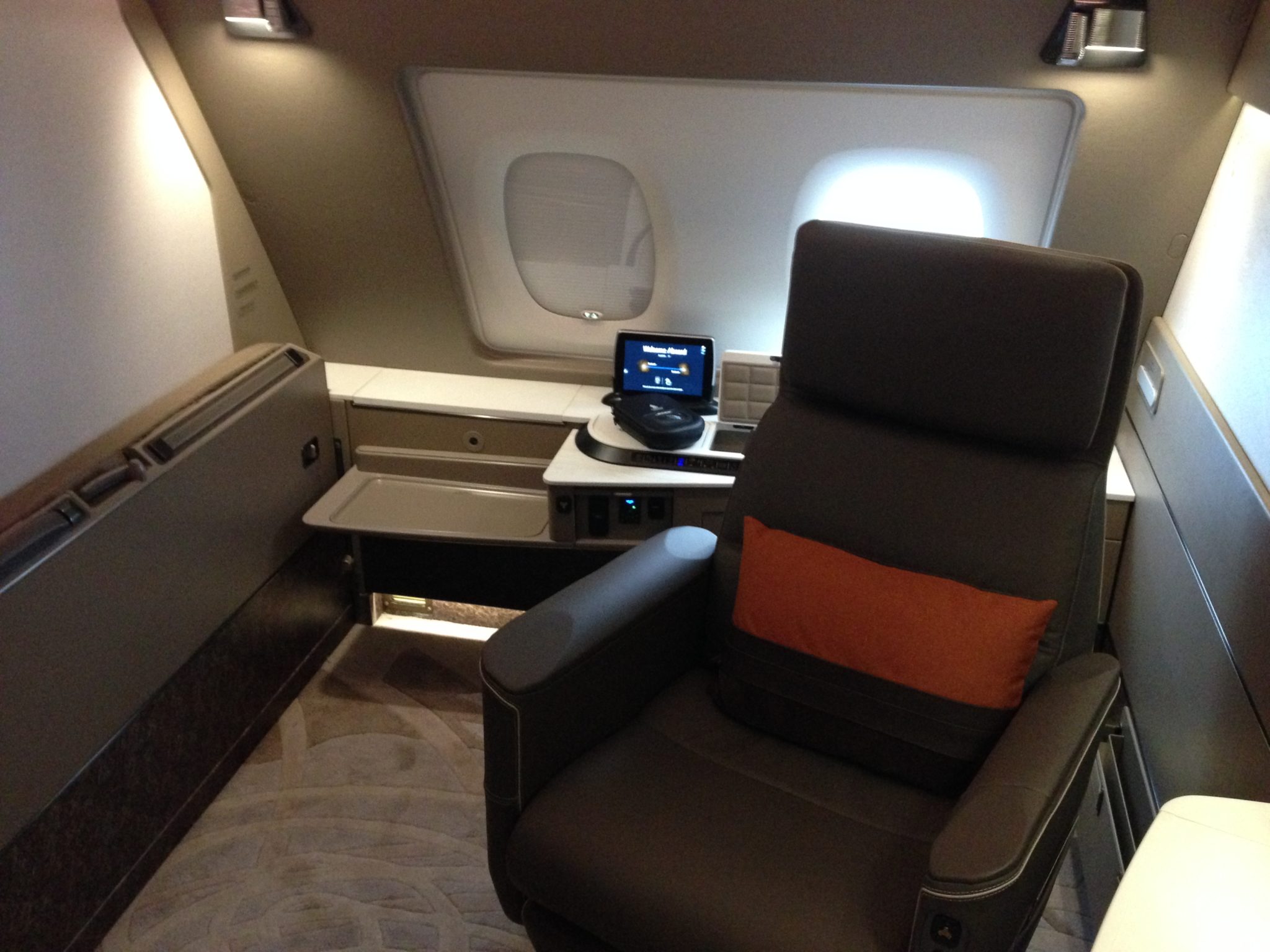 With the bed folded down for sleeping, the cabin still keeps the armchair, giving a spacious bedroom feeling. The forward cabins have their bedroom walls next to each other, making a two-bedroom suite possible when lowering the separation wall, Figure 7. 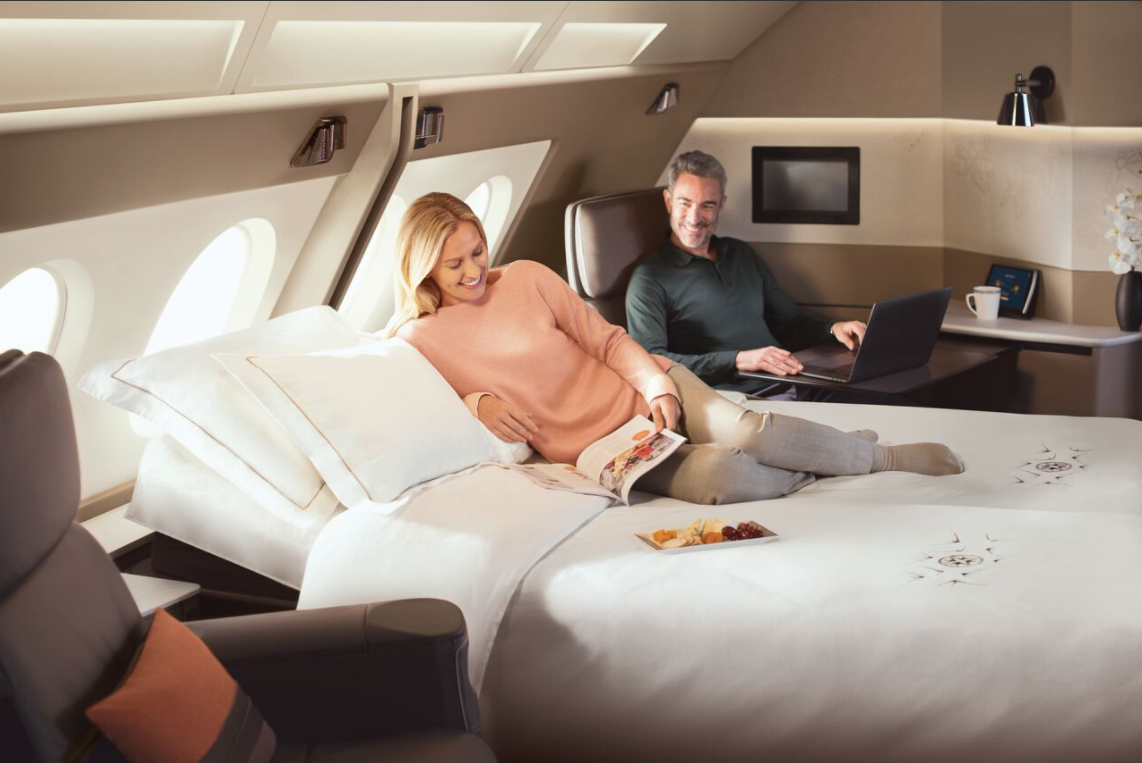 The new, more efficient, utilization of the A380 cabin space was made possible by a selection of the new A380 features presented at the Paris Air Show, under the A380plus label, Figure 8. 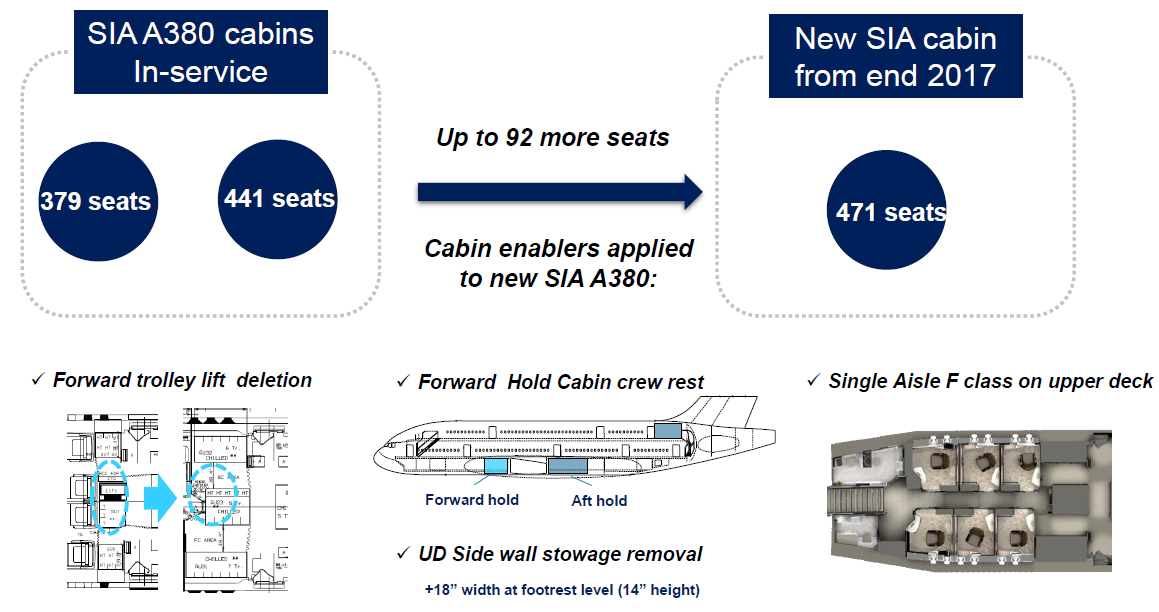 As the Singapore A380 deliveries are part of running orders, with close-in delivery dates, the more elaborate Plus features can’t be implemented.

That the new A380s can hold more seats than any previous Singapore version, despite new, -higher, seating standards, proves the A380’s flexibility in keeping up to date, according to Airbus.