December 29, 2017, ©. Leeham Co.: The past year was a transition year for Embraer. Their E-Jet was in its last year before deliveries of the new E2 version begins. The company labels 2018 as an additional transition year, as the ramp-up costs of the first E2 deliveries, the E190-E2, will keep profits down.

Strategically, 2017 has been a tumultuous year for Embraer. Boeing’s complaint to the US Department of Commerce for Bombardier’s CSeries sales to Delta at “dumping prices” drove the competitor aircraft into the hands of Airbus. This unexpected move saw Embraer and Boeing hold merger talks, plans which could be affected by the Brazilian government’s golden share in Embraer. 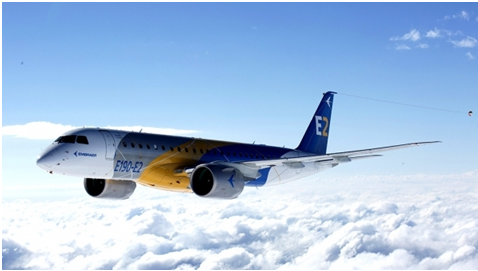 The E-Jet took Embraer from a minnow in the airline industry to a top three position. After 15 years of production, the question was: How to replace the successful E-Jet? The decision for a makeover to the E2 version, instead of a new design, was a prudent move.

The development of the E2 version with its new engines, wings and systems, has gone to plan. The first E2 variant, the E190-E2, will be certified early 2018 with deliveries to Norwegian regional carrier Widerøe beginning in April.

The larger E195-E2 follows mid-2019. The E-Jet variant “holding the fort” during the transition to the E2 is the E175, with 83% of commercial aviation deliveries for 2016. This trend has continued during the first three quarters this year. The E175 counts for 82% of 2017 deliveries to-date. Forecast for the year is an unchanged 100 deliveries, enabling a modest Embraer profit.

The E175 was specifically designed for the US scope clause controlled regional airline market. With the clauses remaining unchanged for many years to come, the sales of the present E175 got a new spring, as the E2 version will not fit the present agreements. SkyWest ordered 25 E175s in September and American Airlines 10 in October.

Embraer pushed out the E175-E2 to 2021, hoping scope relief has happened by then.

Staying below Airbus’ and Boeing’s radar

The E2 makeover took the E-Jet to a modern aircraft for the next 30 years, by it avoiding messing with Airbus and Boeing on their single-aisle turf. What happens when you do became clear during the year.

Boeing decided to play hard-ball as Bombardier broke into their top US customer Delta with the CSeries. Suddenly the competition was on life-or-death and Bombardier opted out, arranging for Airbus to take over majority ownership and sales and support of the CSeries.

Once the transfer of the CSeries to Airbus is complete in 2018, Embraer competes with an Airbus sales now selling from 100 seats upwards.

The prospect brought the long-standing Embraer and Boeing cooperation discussions into overdrive. An outright acquisition of Embraer by Boeing is unlikely as the Brazilian government has a veto capable golden share, but deeper alliances are likely.

Embraer knew there would be a slump in deliveries before the E2 kicked in. It was for the Executive Aircraft division to fill this slump. A strong expansion of the division was decided.

Embraer started the expansion with the hot-selling light jet Phenom 100 and 300 in 2008. Converting the regional ERJ-135 into the Legacy 600/650 covered the super-midsize business segment.

Next development was the midsize Legacy 500/450 to compete with Cessna’s Citation Sovereign/Latitude and Bombardier’s Learjet 75. The Legacy 500/450 deliveries in 2015 and 2016 were encouraging at 23 and 33 units, but 2017 brought a standstill. Only12 units were delivered during the year’s first nine months.

The lack of mid-size deliveries means Embraer has only delivered 59 Business jets during 1Q17-3Q17, of a Guidance of 105-125 jets for the year. To achieve Guidance deliveries within the last three months is now unlikely.

Embraer’s primary Defense and Security customer is the Brazilian government. The only program aiming for a broader market is the KC-390 military transport. Designed to replace the widespread Lockheed C-130 Hercules, it has a potential world market.