March 5, 2018, © Leeham Co.: Global financing for new and used aircraft is as robust as it’s ever been, says the president of Boeing Capital Corp.

Tim Myers, speaking to reporters on a telephone press conference today, said new sources of financing, more of it and innovative structures are here to support record levels of aircraft deliveries and used aircraft financings.

Even so, he calls for the reinstatement of the US ExIm Bank as a source of funding support in the future.

“We are extremely excited about what’s happening here. It’s more robust than I’ve seen in my [30 year] career.

“In terms of the sheer numbers of participants, there’re very diverse options for financing for our airline customers and for the leasing companies that are a big portion of our skyline,” he said.” 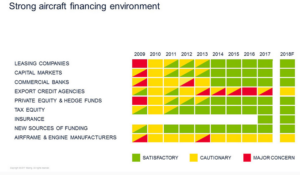 There’re a number of diverse players.

Myers said part of the expansion of financiers is because the market “is very, very healthy.”

This means airplanes are solid and fungible assets that attract investors.

“It’s not a niche class anymore,” Myers said. “This is a stable, growth industry that is driving a lot of players to come in the first time and a lot of repeat business.”

Myers also pointed to innovative financing. Boeing created a new concept, a consortium of insurance companies to replace the US ExIm Bank, which was the target by the Tea Party and conservative Republicans in Congress who viewed the Bank as “corporate welfare,” and in effect a subsidy for Boeing.

The Bank, a government entity, was created during the Depression-era presidency of Franklin D. Roosevelt to help US companies sell goods overseas.

Boeing became by far the largest beneficiary by dollars of the Bank, but thousands of companies—many of them small businesses—benefitted. The Bank’s role in providing financing guarantees for Boeing airplanes came under fire when Delta Air Lines targeted guarantees for rival Emirates Airline at below-market rates.

ExIm later revised its rates and fees to be commercially on a par with airlines and lessors that don’t use ExIm. Over the course of its history guaranteeing Boeing financings, one a few airlines defaulted. During the same period, ExIm returned money to the US Treasury every year.

During the height of the Great Recession, ExIm provided financing support more than 30% support for Boeing airplane deliveries—all supporting US jobs.

But the Tea Party and Republicans proceeded to kill any ExIm guarantees over $10m. So Boeing created AFIC (A Finance Insurance Consortium) to fill in.

Myers said it “is extremely important to get ExIm back up and running,” anticipating that some day, there may be another economic period in which this kind of backstop funding is needed.

Myers said financing in the used aircraft market is better than in recent years.

During the Great Recession, the industry often found it difficult to find financing for aircraft as little as 10 years old. Lack of such financing puts pressure on new aircraft financing, Myers said.

“We’ve seen real growth and innovation” for used aircraft financing, he said. “The asset-back securitization market is strong and thriving with used aircraft. Overall, we couldn’t be happier about what’s happening.”