March 12, 2018 © Leeham Co.: When it comes to preparing for increasing automation, robotics and transforming the way airliners will be built in the future, focus rests primarily on the big OEMs and suppliers.

The small suppliers also must prepare for this transformation.

Tool Gauge of Tacoma (WA) is one such company. I sat down with Jim Lee, manager of sales and marketing, at the Pacific Northwest Aerospace Alliance conference last month in Lynnwood (WA) to talk about transformation.

The Southeast Aerospace & Defence Conference looks at the Transformation in production and building for the future. It’s June 25-27 in Mobile (AL).

Investing as a small company

“I’ve been asked about the Internet of Things. You think you have a problem, but you really don’t know. You have cost accounting and it’s hard to make an ROI case when you don’t really know what the potential value of the problem is,” Lee said in the interview on the sidelines of the PNAA event.

“If it’s a small problem, do you want to spend a lot of money to fix it? No, we don’t. If it’s a big problem, we certainly do,” he said. “There are some things we can do

that are absolutely intuitive. You don’t have to have data to tell us we need to work on this.” 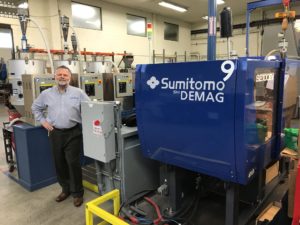 “We think there’s a strong business case for automating that using…robots to pick parts, not just to set it on the table, because then you haven’t really eliminated any labor. You pick the part and maybe do an inspection, to do some value-added work while it’s in control of the robot and then you count it and then box it,” he said.

“Then you’ve eliminated the actual variability there. You have a much more consistent process.”

Tool Gauge, which primarily makes plastic parts, is but one of many companies making thermoplastics.

“The thermoplastic process likes to be very, very consistent, so every part is exactly alike,” Lee said.

Automation will be key, especially for the repetitive work. “[That’s] not fun work, it’s not good for your career, it’s hard to find people who are willing to do that work in Tacoma, where we’re located. We need more people in the company, so do we want to train them to sit there and do assemblies or do we want to figure out a way to assemble it automatically? Then we can take people and give them better jobs.

A key element of the business case for the Boeing “797” or New Midrange Airplane (NMA) is cutting production costs. Boeing’s business case for the 787 rested in part on automation and “snap-together” airplane sections. Execution was famously a disaster, but even in this chaos, elements were used that have application on the 777X and will have even more on the 797.

Tool Gauge plans to be ready for the 797.

“We want to be fully capable of doing that kind of automation. We’re on contracts now for the 777X that go to full ramp toward the end of the first seven-year contract. We can’t wait seven years,” Lee said.

“We know of some of the components we make that are ripe for that kind of automation. We need to do it really quickly.”

Tool Gauge makes interior plastics for the 777X, both cosmetic and functional parts. The cosmetic parts include doors, trim pieces, class dividers and handles. Functional parts are made for the air and galley systems, for example. The company also makes parts that are critical to flight, such as parts in the wing that hold the fuel line.

Lee says the company “really did well on the 787. We’ve got a very large contract on the 787 over an eight-year contract. We have a ton of 737 parts.”

Automation by Tool Gauge is used on the 737 and 787 programs. “They’re in production so long that you can rationalize automation and the capital against those programs,” he says.

Preparing for the future

Lee said that the “tent pole” for Tool Gauge right now is that the current factory in Tacoma is more than 50 years old. The warehouse is in an old railroad maintenance building.

“We’re out of room,” he says. “We’re putting all our eggs into the basket of let’s put up a new facility.”

When Tool Gauge finishes the new building, installing robotics during the phased construction, Lee wants the equipment to be in place for primary and secondary manufacturing.

Cutting costs now for the future

Lee said that because plastics are petroleum products that are certain to increase in costs over the seven-year life of a contract, trying to build in price hikes is difficult. So, Tool Gauge attacks the cost side through greater efficiencies.

“We’re already locked in in order to meet our margin objectives to doing whatever we have to do [on costs] in order to maintain our margins,” he says. “We know by looking at our processes there are a lot of things we can do. We can do some value-stream mapping. We can do some lean initiatives. We can get cost savings. We can get low-hanging fruit.”

Tool Gauge, through interior manufacturer Zodiac, is a supplier to Airbus. It currently does not supply Bombardier. The company will be a supplier, via Zodiac, on the Mitsubishi MRJ when this airplane eventually proceeds to deliveries. Tool Gauge sells directly to Boeing.

Two thirds of the business is plastics and the balance is machine metals. The vast majority of the latter is for Boeing Global Services and its product/parts support to in-service airplanes.

Tool Gauge expects to double in size in the next four or five years, based on contracts in hand. The privately-held company has 130 employees. Sales should double with another 100-150 employees by 2022 when the 777X is at full rate.

← Bjorn’s Corner: Aircraft drag reduction, Part 20
Embraer thinks a business case can be made for turboprop, but nothing soon →