“Back after near shutdown. Restoring confidence. Organisational restructuring. Rising crude prices.Stiff competition. Legacy issues. We were determined to transform.”

These words are on the first page of the Annual Report.

Name another airline that is so up-front, open and candid about its past turmoil.

“From dwindling reputation to India’s most preferred airline. From running on losses to clearing-off existing debts, generating excess cash flows, and regaining customer and consumer confidence. From inability to control costs to lowest-in-the-industry cost model. From unpredictable operations to industry defining operational parameters and customer satisfaction levels. From lacklustre stock performance to highest in the airline industry returns in the world. From investors shying away to investors bullish on us.” 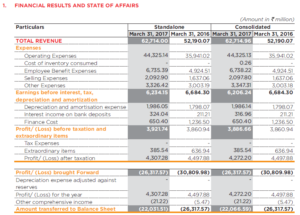 From there, it’s Annual Report reverts to the traditional self-promotion, but Spicejet can’t be blamed for tooting its own horn.

For years, Spicejet was on LNC’s Storm Warning Flag list as a carrier to watch because of huge losses and over-ordering airplanes.

In just two years, the airline turned around from near-extinction to a profitable carrier to become India’s third largest domestic carrier, after Indigo and Jet Airways and slightly ahead of Air India’s domestic share. 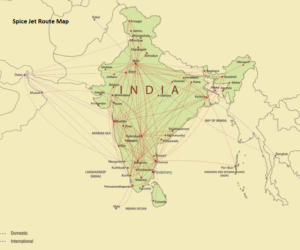 Spicejet’s route map at October 2017. Click on image to enlarge.

For regional routes, it uses the Bombardier Q400. An order for 25+25 placed last year at the Paris Air Show breathed new life into the struggling program.