Aug. 20, 2018, © Leeham News: A growing shortage of workers is exacerbating pressure on suppliers as they struggle to meet current aircraft production rates, even as Airbus and Boeing want to raise them even more.

Add to this the thousands of retirements facing the OEMs in the next 5-10 years, and you can see the strain facing Airbus, Boeing, the engine makers and the suppliers feeding into them.

It also partly explains the shifting trend toward automation. Setting aside the obvious benefits of automation—quality control, accuracy, boring repetitive work, etc—the supply chain in simply facing a growing shortage of workers for which there is no easy answer.

LNC has been writing about the growing worker shortage for some time. Throughout the second half of last year and well into this year, we’ve noted that this is one element of the production transformation that’s going on at Boeing and aerospace.

We noted that worker shortages, the need to automate for efficiencies and preparing for the next generation of airliners are all probably reasons why Boeing refused to provide job guarantees in exchange for tax breaks on the 777X.

Since then, Boeing reduced employment in Washington State as employment in other “Boeing states” grew, much to the chagrin of the labor unions.

For Boeing, though, it’s also about retirement and cost cutting its labor bill. LNC previously reported that Boeing faces a surge of retirements in the next 5-10 years as engineers, technicians and touch-labor employees hit age 55 and above.

Boeing compounded the problem, however, by offering early retirement buyouts in an effort to reduce its labor costs. This chicken just laid a big egg.

The Seattle Times, in a report Thursday, once again noted Boeing’s worker shortage due to accelerated voluntary retirements and its negative affect on the production backlog and meltdown on its 737 line at Renton (WA). Some 40 737s are parked at Renton and Boeing Field, without engines or with unfinished work. The Boeing Co. CFO Greg Smith says the problem will extend into the third quarter.

But these high-profile headlines are only the tip of the iceberg. Deep down into the supply chain, finding workers is a growing problem.

Tool Gauge, of Tacoma (WA), is a small company by supplier standards. Its employee head count numbers in the low hundreds, not thousands. Its parts generally aren’t things passengers will see, though some handles, vents and wingtip lens are visible.. They’re nuts, air system components and the like. It supplies parts to all the Boeing 7-Series airplanes and to Boeing Global Services for the latter’s MRO business.

The company is in the beginning stages of an expansion that will add about 160 employees.

It’s also expanding its use of automation.

Jim Lee, manager of the company, said the shortage of workers is part of the reason more automation, including robots, is being pursued.

(For purposes of this article, all the other reasons for automation are assumed. This focus is on workforce.)

In a tour of the current plant, workers were seen using toothbrush-like tools to do finishing work on plastic parts, shaving off little burrs. The work is painstaking, tedious, repetitive and not very interesting. Automation could do this job, freeing the human labor to pursue much more interesting and rewarding work, Lee says.

Automation seen on the tour reduced one job from three days to under 24 hours.

“We’ve got a ton of repetitive motion,” Lee says. Automation and robotics are best suited for this type of work.

Parenthetically, see this Forbes column about pilots that in part addresses the boring, repetitive nature in cockpit work. Automation is a big part of piloting airplanes and has been since the 1950s. 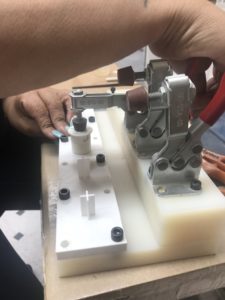 The workforce shortage makes it difficult to find employees. Tool Gauge recently retained an employment firm to find people. Lee prefers to stick to the Puget Sound area, eschewing national recruitment and the moving costs associated with it. He even wants to avoid moving people from within Washington.

The employment firm does Tool Gauge’s basic training so that when the employee sets foot on Tool Gauge property, he or she is ready to go right into a productive position.

The company cross-trains its employees for multi-job functions so it can handle surges in demand.

“This has been our work-around” for the shortage in employees, Lee says.

Although typically workers in the supply chain historically leave to move up to larger companies, Lee says there have been resumes coming from Boeing employees who are tired of the grinding commute from Pierce County (the greater Tacoma area) to Renton, Boeing Field or Everett. But these numbers are small.

Orion is a supplier of a different business model. Located in the Seattle suburb Auburn, thus us a non-profit company whose mission it is to train people for its own workforce, providing good industrial jobs supplying principally Boeing but also feeding into a host of Tier 1 suppliers that serve Airbus, Bombardier, Gulfstream and others. Two-thirds of its revenues comes from Boeing.

Tom Brosius, VP and GM, says finding entry-level people with no training is easy, although retention sometimes is difficult. Orion has lost trained people to other industries, such as construction, as they seek higher wages.

With 400 employees, Brosius says Orion has had as many as 30 skilled worker open slots for as long as 90 days. Orion can’t fill its own skilled requirements by hiring entry-level people and then training them.

Esterline Mason is based in the Los Angeles area. It’s best known for making controls for UAVs and other unmanned systems, but it, like Tool Gauge, makes things for the commercial airplane companies. In a first, it makes the cockpit systems for Embraer’s E2 jets.

In an interview at the Farnborough Air Show, its president David Tessier told me he’s having trouble finding workers.

Tessier says Mason not only has had to expand its localized, regional approach to trying to find employees, it’s now cruising Linkedin.

“I’m running out of options. We’re scouting Linkedin to find people to talk to. We have 20 open tech jobs we can’t fill, even with strong compensation packages,” he says. Finding people with engineering background, high skilled labor is difficult.

Some jobs have been open for three or four months.

“It’s been a nightmare,” he says. It’s one reason—though not the only one—he opened a plant in Tijuana, Mexico.

What Boeing is doing

Aside from shifting workers around in SWAT teams to fill in where needed, such as the 737 production backlog, Boeing is hiring back as contractors workers who took early retirement buyouts.

In June and July alone, Boeing announced plans to dedicate $100m in worker training in the USA. It also announced a grant of $5m for STEM education in Europe, where it also has significant investments.

It previously announced a commitment of $300m for US training. (The $100m announcement above is part of this $300m commitment.)

Separately, Boeing sees a need for 790,000 commercial pilots over the next 20 years as a wave of retirements loom. Boeing, through its Boeing Global Services unit, offers pilot training.

While I’m focused on Boeing in this column, this is only because I live in Boeing’s backyard. The workforce shortage is an industry-wide issue.

Spirit Aerosystems in Wichita (KS)—the self-proclaimed aviation capital of the world—also has workforce shortage issues. Spirit builds the fuselage for the 737 and nose sections for the rest of Boeing’s 7-Series airplanes. It builds composite panels for the Airbus A350 at its Kinston (NC) plant.

Boeing South Carolina, which is the Charleston 787 assembly plant, faced workforce shortages in its early years. It still does.

Pick an aerospace company and you’ll find that workforce shortages are a problem.

It’s going to get worse before it gets better.